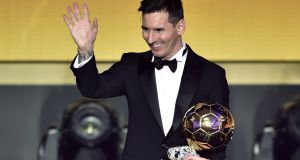 Lionel Messi carries home another Ballon d’Or, as if we needed another reminder about his majesty. Great is a word that can be overused in sport but in the concurrent careers of Messi and Cristiano Ronaldo we are privileged to be in the presence of two that firmly qualify.

The 2015 Ballon d’Or jury comprised 498 returned votes, down 10 per cent on 2014’s 554. With the required two thirds of the possible electorate returning their votes by the November deadline there had been no need for a repeat of the 2013 decision to extend voting. That decision had been seen as somewhat controversial, given the extension’s timing favoured Ronaldo by virtue of the footballing calendar.

Rules are rules, however. Voting is a serious business.

The two inductees for baseball’s 2016 Hall of Fame class were announced last week. It’s a business taken rather seriously by our cousins across the Atlantic, who elected Ken Griffey jnr and Mike Piazza.

Soccer has been remarkably lucky to avoid high-profile drugs issues, as has rugby. Although it’s clear that people don’t seem to give a damn about taking drugs in the NFL there is a somewhat different attitude to drugs in baseball.

Forgetting that amphetamines had been used across the game for decades, the mere suspicion of a player “juicing” with steroids despite zero hard evidence has been enough to suppress some players’ vote totals to a large degree.

Piazza, star of the LA Dodgers and New York Mets was one of the greatest hitting catchers the game has seen. He had to deal with stories about back acne, seen by some amateur steroid sleuths as a telltale sign of cheating. He never failed a drugs test, and that combined with the ferocity of his hitting has satisfied the minimum requirements for 81 per cent of the ballot, above the 75 per cent minimum for induction. Griffey had predictably sailed in with the only major question being that three of 440 ballots had not included his name.

There had been changes to the voting system this time around. No longer can a retired ballplayer spend 15 years hanging around on the ballot; the new limit is 10. The electorate has also changed, with voters who have not actively covered baseball for the previous decade struck off the list.

Going by raw voting results alone the changed electorate, likely younger as a whole, has more of an appreciation for newer ways of evaluating a player’s impact on the game and has perhaps more morally nuanced view of what a player’s drug history might have been, particularly a player who never failed a test.

To vote in a silly way might be your right, but at least with an open ballot it’s clear to all who the 72 people who didn’t include Messi as one of their top three players in the world (this list includes Mr Ronaldo).

Equally, Mr Messi was one of the 111 people who didn’t consider his rival to be worth even a third-place vote. Tactical voting notwithstanding, the list of 28 learned souls who didn’t include either superstar includes Germany’s captain and coach along with three media voters.

Openness has two sides. In these sensationalist times a voter could themselves become newsworthy by deliberately submitting a ludicrous ballot. Where baseball awards are concerned, in order to avoid this potential conflict of interest some organisations – the New York Times, Washington Post and Baltimore Sun for example – do not permit their writers to vote.

With an open ballot and an electorate split evenly between active players, coaches and the media the Ballon d’Or might be one area where Fifa have got things right. However, while Messi and Ronaldo are around it’s probably quite hard to get a catastrophically wrong result.

1 UK Sport to investigate ‘deeply troubling’ allegations of abuse in gymnastics
2 Cam Newton broke the mould: Can his flame be rekindled at the Patriots?
3 Pete Sampras: The forgotten great with the best serve in the business
4 Tuilagi case shows England’s home-based clause is out of date
5 Tipping Point: DeChambeau’s transformation raises questions, but who will ask them?
Real news has value SUBSCRIBE
Here is your handy guide to sport on television this week