America at Large: Concussion, the NFL and players’ lives

Concussion is the new film starring WIll Smith as a surgeon who works to expose the serious threat of repetitive concussions in the NFL. 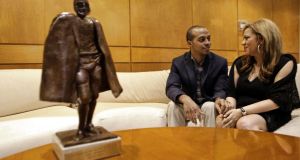 Tregg Duerson, the son of Dave Duerson, and his mother Alicia with the late Chicago Bears defensive back’s NFL Man of the Year trophy. The family is upset at the portrayal of Duerson in Concussion. Photograph: Marc Serota/The New York Times

Before pointing a revolver at his chest and pulling the trigger almost five years ago, Dave Duerson wrote a note to his next of kin that read, “Please, see that my brain is given to the NFL’s brain bank”.

A defensive back on the storied Chicago Bears team that won the 1986 Super Bowl, he had suffered memory loss and other cognitive issues in the years leading up to his death. After his suicide, Duerson became yet another former player to be posthumously diagnosed with Chronic Traumatic Encephalopathy (CTE). One more sad statistic of the damage done by too many percussive blows to the head.

In Concussion, a movie that opened in American cinemas on Christmas Day, Duerson is cast as one of the villains of the piece. At one point, he prevents Dr Bennet Omalu, the Nigerian whose groundbreaking work discovered how so many ex-NFL players had CTE, from entering a medical conference and advises him to go back to Africa.

In another cameo, Duerson shows callous disregard for the travails of Andre Waters, a former pro requesting the league assist him financially as he battles brain damage.

Neither of those incidents ever happened but, in true Hollywood fashion, the makers of Concussion have not let the facts get in the way of a good story. While some bending of the truth and conflating of events is often necessary for onscreen narrative purposes, Duerson’s family and former colleagues are justifiably upset at such a negative rendering, especially the suggestion he was somehow implicit in Waters later taking his own life.

The character assassination of Duerson is unfortunate and unnecessary because the quixotic plot of Concussion hardly needed artificial enhancement. An unknown immigrant doctor played by Will Smith unearths a link between a killer brain disease and the national obsession. Then the biggest and most powerful sport in the country does its best to obfuscate, downplay and discredit his findings. What more could tinseltown need? Well, amid quite a few other exaggerations and fabrications, they’ve also appended a rather superfluous love story to the tale.

The gist of what actually happened remains just about intact. A pathologist working in western Pennsylvania, Omalu autopsied the body of Mike Webster, a legendary Pittsburgh Steeler, back in 2002, and found a brain damaged with what he later labelled CTE. When he diagnosed Terry Long, another prematurely dead Steeler, with the same condition, he knew he had discovered something significant. Far from happy to hear about Omalu’s medical breakthrough, the NFL subsequently used its influence to pour scorn on his attempts to link bone-crunching hits to brain injury.

Earlier this month, MMQB, perhaps the leading website that covers the NFL, held a special screening of the movie for 70 former players at a theatre in Atlanta.

Many found it a very difficult watch, one compared the league’s wilful negligence to the way Big Tobacco fought the links between cigarettes and cancer. Another concluded God never intended for humans to play football. Perhaps the most telling comment, however, came from 47-year-old Keith McCants who left the cinema in tears.

“This touched my soul,” said McCants, a one-time linebacker with the Tampa Bay Buccaneers and Houston Oilers. “It was outstanding, but I can’t process it all, not right now. I watch this movie and I know we were paid to hurt people. We were paid to give concussions. If we knew that we were killing people, I would have never put on the jersey.”

Having legitimately billed itself “the movie the NFL doesn’t want you to see”, it turns out that not many other people wanted to take in Concussion either.

It came in seventh in last weekend’s box office, garnering $11m in ticket sales, paltry returns for a production that cost three times that. Even though December with the play-offs looming is the height of grid-iron mania, many movie-goers obviously didn’t fancy two hours learning how the sport they love ruined so many players they worshipped – while the people that run it pretended otherwise.

To understand just how dastardly and potent the NFL is, you must remember they bullied the otherwise all-powerful ESPN into cravenly withdrawing from League of Denial, an excellent television documentary covering the same ground as this film. And, although the sport has made huge strides in addressing concussion, with improved yet far from infallible protocols during matches, serious doubts remain about how sincere those in power really are about combatting the problem.

The simple fact Pellman remains involved as a high-level administrator in a league where players continue to suffer and die from CTE sums up why, despite all its flaws,Concussion needed to be made and deserves to be seen by a larger audience.

1 Pete Sampras: The forgotten great with the best serve in the business
2 Cam Newton broke the mould: Can his flame be rekindled at the Patriots?
3 The Game Changers: Vincent O’Brien, a pioneer who took Irish racing to the world
4 The unsolved mystery of Goran Ivanisevic’s stunning Wimbledon win
5 Tipping Point: DeChambeau’s transformation raises questions, but who will ask them?
Real news has value SUBSCRIBE
Here is your handy guide to sport on television this week