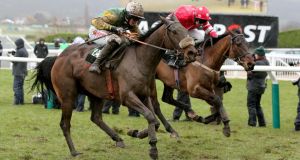 A deal for racing’s media rights could be concluded this week with the Association of Irish Racecourses appearing to be confident that a resolution to the controversial issue is finally in sight.

A continuation of a deal with the current rights holders, Attheraces, has been predicted for some time despite some criticism of Horse Racing Ireland’s negotiating exclusively with that company.

Negotiations had been widely expected to finish a week ago with Ireland’s 26 racecourses expected to ratify a new contract.

“There has been overwhelming support for the deal but some additional information was sought and this has been provided,” AIR’s chief executive Paddy Walsh said yesterday. “I am confident the whole thing can be concluded within another day or two.”

The package negotiated involves satellite TV, the increasingly important digital streaming, and rights to pictures sold to countries outside Ireland and Britain.

Today’s finale at Bellewstown sees the Cheltenham hero Ted Veale return to the course and distance of his impressive pre-Galway Festival success and ground conditions that should suit him much better than when a beaten favourite in the Galway Hurdle.

Tony Martin’s star does have to concede a lot of weight to the Ballybrit winner Que Pasa but can translate his hurdles rating superiority to the level.

Martin gives one of his Galway winners, Woodsophiesmile, a run under a 6lb penalty in the second division of the mile handicap but Byron Beauty could be a better value option while Bleeding Hearts can relish much better going in the opening two-year-old maiden.

1 Keith Duggan: Bubba Wallace tweet shows just how troubled Donald Trump’s mind is
2 Ken Early: Another Mourinho masterclass in going through the motions
3 Malachy Clerkin: Sleep well Jack, you made us all happy
4 Manchester City’s European ban lifted and fine reduced
5 Jack Charlton’s own grievances endeared him to Irish fans
Real news has value SUBSCRIBE
Here is your handy guide to sport on television this week