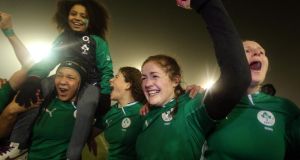 It was back in January that Irish rugby captain Fiona Coghlan insisted that the team’s chief goal in this year’s Six Nations was 2014 World Cup qualification, which would require a top four finish. “We’ll see what we can do after that,” she said.

Well, World Cup qualification achieved – and a top one finish after that.

Along the way to becoming Six Nations champions for the first time, the Philip Doyle-coached team had their first ever victory over England, and only their second over France.

If they can make it five wins out of five away to Italy on Sunday, then it will, remarkably, be the Grand Slam. Before this year, the team’s highest ever finish was third.

“I always said I’d retire happy after beating England,” said Coghlan yesterday, “but we just kept taking another step and another step: the Triple Crown . . . the Championship. Hopefully we don’t slip up now.”

Previous visits
Having lost on their three previous visits to Wales, Ireland opened their campaign in February with a 12-10 win in Port Talbot, before a memorable 25-0 triumph over England. Seventeen times the nations had met in full internationals – 17 times Ireland had lost.

While several of the leading English players had been left out of the squad, so that they could focus on the World Cup Sevens in June, their strength in depth still made them favourites to win their eighth Six Nations title in a row.

Scotland certainly didn’t notice any significant weakening: they lost 76-0 to the defending champions.

“A special day, everything just seemed to click, everyone did their job, it all just fell in to place,” said Coghlan of the 25-0 victory in Ashbourne.

Alison Miller scored a hat-trick of tries, full-back Niamh Briggs completed the scoring with a try, conversion and penalty.

And the Triple Crown was secured with a 30-3 win away to Scotland, Miller making it five tries in two games, Briggs contributing 15 points to the tally.

And, last Friday night, Briggs added 10 more points to her Six Nations total in the 15-10 victory over France, the title made certain the next day when Italy lost to England.

Down to earth
“People ask me if I have come back down to earth, but I don’t think I’ve been up there yet,” said Coghlan.

“We still have work to do, it just hasn’t really hit me yet. After Sunday, I’m sure it will.”

She was back to her day job on Monday morning, as a teacher in Lucan Community College. The students there aren’t usually keen on acquiring any teacher’s signature because if it appears in their “journal” – as a “bad note” – it can indicate they’ve been a touch on the naughty side.

On Monday? Ms Coghlan was besieged with requests for her signature, her autograph the ultimate ‘good note’ after a memorable string of achievements by the team she captains.

“Rugby has given me so many brilliant opportunities, so many wonderful experiences, I’d love more people to get that chance – if our success, and the exposure we’re getting now, leads to more girls getting involved in the game, that would be the best thing of all,” she concluded.

1 World Rugby study advises removal of reset scrums to reduce Covid-19 risk
2 Coming fourth in the Olympics didn’t change this fearless quartet, time did
3 Ken Early: Liverpool fans, Bamber Gascoigne and a close shave in Istanbul
4 As news gets better, can the pull of The Field be resisted?
5 Sideline Cut: Vignette shows why Bird is the true shark in The Last Dance
Real news has value SUBSCRIBE