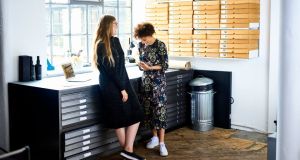 Mental Health First Aid Ireland was established by St John of God Hospital in 2014 and it has since trained 2,000 people. Photograph: Getty Images

They were also among the main causes of short-term absence with stress mentioned by 47 per cent and mental ill health by 34 per cent.

Another UK survey found that the number of employees who say they have experienced mental health problems while in employment has increased from 26 per cent in 2011 to 31 per cent in 2016. This, in itself, would be cause for concern but equally, if not more alarming is the fact that less than half of them (43 per cent) have disclosed their stress or mental health problem to their employers.

This is despite the fact that more than half of them (54 per cent) said their problems were caused by a combination of issues at work and in their personal lives.

There is no reason to believe that these statistics would be any different in this country, according to Donal Scanlan, manager, Mental Health First Aid Ireland (MHFA). “One in four people will be diagnosed with mental health issues in any one year and 50 per cent of people will be diagnosed at some stage in their lives”, he says. “A good place to start a workplace mental health initiative would be with an anti-stigma campaign.”

MHFA Ireland offers in-house training to large organisations both directly as well as through a partnership with Vhi, through its MHFA Workplace programme. Vhi is the only health insurer in Ireland to offer such a service.

It’s not about creating a group of experts. It’s about giving people the knowledge and confidence to offer support

“It is similar to physical first aid and is based on validated scientific research”, Scanlan points out. “Mental health is connected with physical health. I don’t know when or why someone decided that the head should be disconnected from the body. We want to create parity of esteem between physical and mental health.”

The MHFA programme was created in Canberra, Australia in 2000 by a teacher who was working with a mental health researcher at the time. It has now spread to 24 countries and more than 2 million individuals have received training so far.

Mental Health First Aid Ireland was established by St John of God Hospital in 2014 and it has since trained 2,000 people. The standard MHFA course is a 12-hour programme comprising four modules of three hours each. It teaches people how to assist someone who is developing a mental health problem or is in a mental health crisis.

“It’s not about creating a group of experts”, says Scanlan. “It’s about giving people the knowledge and confidence to offer support. We help people learn the signs and the symptoms to watch out for. It’s about emotional empathy.”

Mental health first aiders are trained in a specific framework of action known by the acronym Algee: Approach, assess and assist with any crises; Listen non-judgementally; Give support and information; Encourage appropriate professional help; Encourage other supporters.

We’ve never learned to talk about these issues in Ireland. That’s one of the goals of MHFA Ireland

The theme of World Mental Health Day this year was mental health in the workplace. This reflected the growing recognition by employers of the importance of the issue. Indeed, research in Australia has shown that creating a culture of mental wellness in the workplace, which gives employees a sense of empowerment and support, results in improved productivity and decreased absenteeism.

The same research also found a measurable return on investment of €2.30 per euro spent on average. This rises to €5 in public administration and to €5.70 in the mining sector.

Workplace stress is a major problem, according to Scanlan. “The biggest issues are around a lack of control and uncertainty and ambiguity as well as financial issues”, he says. “Early intervention is critical. It leads to better health, economic and social outcomes. Mental health first aid is early intervention. But people don’t just suddenly get unwell. Maybe they just notice it suddenly. They don’t just suddenly get better either. It’s a process. If we want to create much more supportive communities in Ireland, and workplaces are communities, we’ve got to give people the knowledge and understanding of how to recognise and support mental health issues. We’ve never learned to talk about these issues in Ireland. That’s one of the goals of MHFA Ireland – to create a supportive community in Ireland with a willingness to address mental health problems when they arise and enable recovery.”

A note from Vhi about Rebalance

We know that when employees nurture both body and mind it can lead to happier employees and better business results. That’s why our health and wellbeing programme is focused on engaging  employees in a culture of wellbeing both in work and at home.

Our approach at Vhi is holistic and proactive, with programmes specifically designed to meet each employee’s needs. We offer services which are accessible by all, sustainable in everyday life and enjoyable too.

Wellbeing with Vhi, is all about two pillars; body and mind. In fact, the old adage of healthy body, healthy mind is more relevant today than ever as the two largest categories of work-related illness are musculoskeletal disorders and stress, anxiety and depression.

Our programmes are accessible to all (not just the superfit), which in turn leads to greater engagement and sustainability. Choose from our range of programmes, including trending topics such as diet and nutrition, fitness and emotional wellbeing.

If you’d like to find out more about Vhi Rebalance call 056 7775800 or visit our website to arrange for one of the Vhi team to get in contact with you.

A healthy workplace by design

The wellbeing audit: working from a solid baseline

Getting the balance right with wellness in the workplace