The fertility test: what it is and why it matters 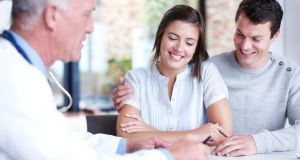 What fertility testing does is provide you with information and understanding about what’s going on, and that puts people back in control

Fertility is something we tend to take for granted. It’s why so many of us spend our younger years guarding against, and fretting about, unwanted pregnancy. Then, when we decide the time is right, most sail into parenthood.

It’s only when that doesn’t happen that, all of a sudden, fertility moves front and centre in our lives.

If that’s you, the message from Declan Keane, founder of ReproMed, a nationwide chain of fertility clinics, is positive. To paraphrase, if at first you don’t conceive, try, try and try again.

“Most people will be fine, so don’t panic. Studies suggest that 85 per cent of people who are trying to have a baby and who are having regular, vaginal intercourse for one year will get pregnant,” says Mr Keane.

A second year will most likely take care of the rest.

But how much time you want to spend trying can depend on your age. “We ask women to keep the age of 36 in mind. If you are younger than that, and haven’t gotten pregnant within a year, I’d say keep trying,” says Mr Keane. “If you are over 36 and have been trying for a year, then my advice is to present sooner for fertility testing.”

But it could very well be simple misinformation that is impeding your pregnancy progress. “We do see people who are misinformed about reproductive biology. Sure, we all get sex education in school, but that’s not the same thing,” he says.

“The first step for us therefore is to see what’s going on. You might have a regular cycle, but you could be having sex at the wrong time of the month. Or it could be that you have an irregular cycle. We look to see if a woman’s hormones are okay and we can take a scan of their ovarian function to find out if they are producing follicles, and if so, how many. We check their medical history too – things like chlamydia might have caused a blockage in their fallopian tubes, causing sub-fertility.”

The Fertility Podcast with Maia Dunphy

The clinic will look at the woman’s uterine structure too. “We’re checking to see if they have a normal uterus; if there is any congenital abnormality which surgery could remove, or if there is any scarring in their pelvis or fallopian tubes.”

The clinic will also try to establish whether or not there are fertility issues relating to the man, which is assessed through semen analysis.

“Traditionally there was this assumption that fertility is a female issue, which of course is nonsense. It arose simply because it is only relatively recently that science has developed the ability to detect signs of male sub-fertility. And, as a result of those advances today we see that around 40 per cent of sub-fertility relates to male issues, 40 per cent to female issues, and 20 per cent is unexplained,” he says.

The most obvious cause of sub-fertility in men is a low sperm count, poor motility or where the genetic integrity of the sperm is poor.

Going through fertility testing can be isolating, he says. “We all spend our lives saying that we’ll have kids in the future, so that when it doesn’t happen, people wonder ‘Why me?’.  They can feel annoyed and angry, or grieve. The fact that we typically spend so many years trying not to get pregnant makes it a much bigger shock when we find out it’s not happening. It can have a big psychological impact, which is why we have counsellors on hand here to provide support,” says Mr Keane.

Such support can help keep a lid on stress too, which is important given that, in the meantime, having sex is still the best way forward.  “An egg is only viable for 18 to 24 hours of every month and, if you are having sex regularly, sperm will live for two days, so keep doing it. Often people who are worried about their fertility start using the Billings method, which ironically our parents’ generation used to use to avoid pregnancy, and spend their time measuring things like body temperature and mucus levels to find the optimum time to get pregnant. But you’re much better off having regular intercourse than stressing out over cycles.”

There are however lifestyle changes you can make to give yourself the optimum chance of conceiving, including losing weight if you need to. “Anyone with a BMI (body mass index) of over 30 reduces their chance of pregnancy, both naturally and by IVF, and that goes for both men and women because weight affects your hormones as well as your general health. For women it can put you at greater risk of developing diabetes in pregnancy and for men, it can affect the genetic integrity of your sperm,” he says.

Drinking to excess and smoking can impact negatively on fertility too, he cautions.

At the end of the day, what fertility testing does is provide you with information and understanding about what’s going on, and that puts people back in control as regards what steps they take next.

“Fertility testing is about circumnavigation of the problem,” he says. Conquering it may require the next step, fertility treatment.

COUNTING THE COST
As part of Vhi’s new fertility benefit, members on applicable plans can receive a contribution towards fertility testing including an initial consultation, semen analysis and hormone (AMH) testing with ReproMed. For more see www.vhi.ie/fertility

Over the coming weeks Vhi will be partnering with The Irish Times to host an online Fertility Hub, with articles and podcasts about planning a family and what to do if you need help.