Beating dyspraxia/DCD: you can start early with help from your smartphone 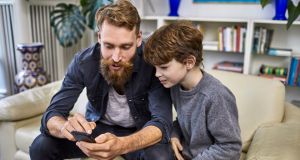 The app involves daily activities and games that enable children to work on their speech and motor skills. Photograph: Getty Images

Did you know that as many as two children in every classroom may have dyspraxia? Possibly not, as it’s not widely spoken about. Also known as developmental coordination disorder (DCD), awareness of dyspraxia/DCD remains poor despite its relatively high prevalence.

A condition that affects fine motor skills, speech and coordination, it requires much in the way of early intervention, explains physiotherapist Ciara Clancy, CEO and founder of Beats Medical. The company has just launched an innovative app which aims to provide enhanced care for children with dyspraxia/DCD in a fun and engaging way, and subscription to the app is available at a reduced price to all Vhi customers on hospital plans.

“It affects up to 10 per cent of all children so it’s really quite common,” she explains. “It affects children’s fine and gross motor skills, things like coordination, balance, so things like holding a pencil or catching a ball, they will be behind their peers in development of that by a year or two.” Some children with dyspraxia/DCD may also experience problems with their speech and communication skills.

Unsurprisingly, early intervention is key. A significant initial input is often required at around age 7-8, to help with pencil grip and handwriting, but there can be a knock-on effect in all different areas due to the impairment of fine and gross motor skills. “We know that physiotherapy, speech and language therapy, and occupational therapy has been shown to help children develop these skills and the early developmental years are crucial,” says Clancy.

Worryingly, research carried out by Dyspraxia/DCD Ireland found that 82 per cent of children are missing out on these essential therapies due to long waiting lists, and/or financial constraints, when it comes to accessing care. Clancy is unequivocal about the strain this can place on families.

“Diagnosis can be a scary time for families and then they have to face the fact they may not be able to access the care or the level of care that their child requires.” Schools may also find it difficult to provide the additional support a child with dyspraxia/DCD will require, she adds.

The Beats Medical Dyspraxia App was therefore developed as a response to this. Clancy emphasises, however, that it should not be looked upon as a replacement for care, but rather a means to augment and enhance it.

“It supplements care and helps to support children and their families facing these long waiting lists during that critical timeline.”

Beats Medical has already developed a successful app for Parkinson’s disease, but Clancy’s experience in physiotherapy meant she had witnessed first-hand how families struggled to access therapies for their children with dyspraxia/DCD. “It was clear to me that it was one of the most underserved areas, after Parkinson’s disease,” she notes.

During the app development process, Beats Medical worked with families and support organisations such as Dyspraxia/DCD Ireland as well as paediatricians, therapists, and other healthcare professionals across the US and Europe.

“We wanted to identify the challenges that are impeding access to care on the ground, and also the therapies that are most commonly used in this condition. It was really important that from a clinical perspective we knew its value but, more importantly, that we got feedback from families.”

The app, which has taken almost two years to develop, involves daily activities and games that enable children to work on their fine motor skills such as pinching and grasping, as well as balance and coordination. Clancy explains that clever design - it has an “outer space” theme - means users may not even realise they are doing their dyspraxia/DCD “homework”.

“The great thing about the technology is that we have been able to add a little bit to the exercises and therapies provided, to emphasise the fun aspect and the gaming element in order to ensure it is a fun thing for kids to do at home.” Children progress through different levels, earning stars for doing the activities along the way. It is designed for daily use, and therapies can be adapted as the child grows older, adds Clancy. “It is tailored to each child’s individual needs.”

Importantly, the technology doesn’t come in isolation – Beats Medical also offers a support service. “This helps families getting set up, and we also advise on use of the app so that they are not alone with the technology.”

Ultimately, the app aims to help children with dyspraxia/DCD achieve the best possible outcomes by enhancing the care they receive from therapists, says Clancy. “

The app will play an important role in every child’s development and it’s about building on the care they receive. Children can use the app every day at home and develop, while getting on with their lives.”

The app, available on iOS, costs €330 for an annual subscription but Beats Medical has teamed up with Vhi to exclusively offer it at a reduced price of just €50 for Vhi members on hospital plans. “The app costs less than a euro a day, but Vhi customers can avail of it for less than a euro per week,” says Clancy. “We are thrilled that Vhi are supporting families with dyspraxia/DCD during those crucial early years.

Now Vhi are supporting families of children with dyspraxia/DCD. All Vhi customers on hospital plans can avail of an annual subscription to the Beats Medical Dyspraxia App at the exclusively discounted price of €50, compared to the standard subscription fee of €330.

To find out more, visit vhi.ie/dyspraxia