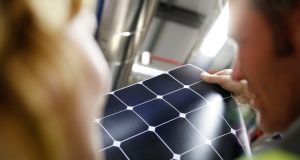 Dr Patrick Keatley: “In Northern Ireland, 295 Gigawatt hours of wind energy, worth £50 million at retail prices, was thrown away during the first six months of this year.”

Ulster University is leading an EU Interreg VA €6.7 million project which is investigating how energy storage devices owned by consumers and businesses can allow more renewable energy to be integrated into the power grid.

Dr Patrick Keatley, lecturer in Energy Policy and Infrastructure, Ulster University explains that the project will help to meet the UK’s Net Zero 2050 partner by enabling the connection of more renewable energy to the power grid.

Managing the variability of wind energy is a major challenge - availability tends to be poorly matched to demand. “In Northern Ireland, up to 18 per cent of wind power is currently thrown away as it can’t be used at the time it is generated,” says Keatley. “In the Republic of Ireland, the figure is lower - around 5 per cent. But in Northern Ireland, it’s a massive problem. 295 Gigawatt hours of wind energy worth £50 million at retail prices, was thrown away during the first six months of this year.”

SPIRE 2 is looking at the potential for energy storage technologies in people’s homes, to take this energy when it is available and use it later when needed. The ultimate aim is to evaluate, develop and facilitate the wide-scale deployment of consumer-owned energy storage technologies, to operate profitably in the changing energy markets in the UK, Northern Ireland and the Republic of Ireland.

“The aim is also to increase R&D activity among the industry partners in the programme,” says Dominic McLarnon, commercialisation manager on SPIRE 2 with Ulster University.

“We are looking at the development of more competitive high value energy technologies, market led policy changes and business models. We have 16 PhDs and six postdoctoral researchers on the project and we want to transform these ideas into commercial reality.”

RULET – Rural-Led Energy Transition – is an initiative within the SPIRE 2 project aimed at reducing or eliminating the risk of low-income households being left behind in the transition to clean, smart, integrated energy systems.

Led by Ulster University and the Northern Ireland Housing Executive (NIHE), RULET is focused on making the full benefits of smart energy technology available to the most vulnerable households in the western counties of Northern Ireland, a wind energy hotspot. Other partners include NIE Networks, Energia/PowerNI, heat pump manufacturer Grant of Birr, Co Offaly, and smart heating control developer Climote.

“When you look at technologies like energy storage for wind and solar, so far they have tended to be available only to people with capital,” Keatley explains. “In effect, you needed to be a house owner with a roof and money to spend. That means there is a danger of subsidising people who can already afford it.”

The problem is only exacerbated by the fact that those people will also be able to avail of smart grid technology giving them access to cheaper energy. “That leaves those who can afford it least having to shoulder the higher fixed costs of the network,” Keatley adds.

Ulster has chosen to partner with the NIHE on the project due to its climate ambitions, scale and reach. “It is responsible for almost 90,000 homes in Northern Ireland and is by far the biggest social housing landlord on the island of Ireland,” says Keatley.

The first part of the project aims to enable people to avail of agile tariffs. By running heat pumps to charge Sunamp heat batteries, when wind energy is available on the system, NIHE tenants will be able to avail of exceptionally low prices. “Energia/Power NI will trial new dynamic market arrangements, which will allow NIHE tenants to take advantage of cheap wholesale electricity prices. In effect, they will never pay more than the existing Economy 7 tariff and in general will pay between 5p and 8p per unit when wind energy is available.”

Further adding to the benefit for the householder is the Grant heat pump. “The company has developed a hybrid heat pump system, specifically for social housing,” Keatley points out. “One of the issues with heat pumps is that they have to be operated in a pretty well insulated, thermally efficient house. They become much less efficient if this is not the case. That would normally require a lot of expenditure on upgrading the house to make it ‘heat pump ready’. Grant’s hybrid system aims for an economic sweet spot with a 6Kw pump running in tandem with an existing boiler. NIHE will carry out basic energy efficiency upgrades, so that the heat pump does around 80 per cent of the work and significantly reduces fossil fuel consumption and carbon emissions. Much of the energy will have been stored by running the heat pump on the cheap wind energy tariff during the night.”

The second element of the RULET project is the Energy Cloud which is being led by Climote. “Rather than throw excess wind energy away, why not give it to vulnerable households to use for hot water?” Keatley asks.

This can be done by the system operators (Eirgrid and SONI) sending a signal to homes to switch on immersion heaters in hot water storage tanks. The power supplied would be free to tenants, with the most vulnerable being prioritised. In normal circumstances this would see the wind farms getting some payment, but in this case any profit will go back into Energy Cloud to fund wider benefits for vulnerable households.

“There are some significant market and policy issues that have to be dealt with,” Keatley notes. “That’s not a trivial challenge but the alternative is to keep throwing away clean energy while thousands of fuel-poor tenants struggle to keep their homes warm. Technical solutions have already been developed elsewhere and we can learn from that. It is important that we focus on vulnerable households first with these technologies. As we get better at managing wind on the grid the amount of excess power available will fall and we need to ensure that those who need it most aren’t left behind.”

The environmental benefit is also important. “As we look towards the Net Zero 2050 target, that’s just two boiler lifetimes away,” he continues. “The average boiler will last 15 years, and home heating needs to start switching to heat pumps or some other low-carbon option now. We expect to finish the RULET project by mid-2022 and hope that the solutions will be rolled out more widely by NIHE after that.”

“This is a signature project underpinned by the work of the fantastic PhD and postdoctoral researchers working on the SPIRE 2 project,” adds McLarnon. “A lot of important work is being done by the partners. This aspect of the  project will help NIE Networks demonstrate how much heat can be decarbonised if you make the network smarter. This will reduce Northern Ireland’s dependence on imported fossil fuels as well as cutting emissions of greenhouse gases and other pollutants.”

This project is supported by the European Union’s INTERREG VA Programme, managed by the Special EU Programmes Body (SEUPB).