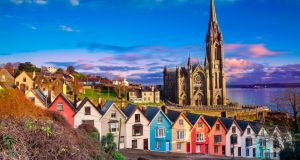 While good-value-property will be a driving force for anyone considering a move to Cork, there are many other aspects to consider including quality of life. Photograph: iStock

With a thriving jobs market, lower cost of living and an excellent quality of life, it’s no wonder many ex-Corkonians are considering the move home. Not only that, non-Corkonians are also seeing huge potential in Ireland’s second city.

On November 8th, The Irish Times will host a first-time buyers' event in association with Ulster Bank, in The River Lee Hotel, in Cork, designed to help buyers in the city and county get on the housing ladder. As well as the chance to meet Ulster Bank mortgage advisors face-to-face, attendees will hear from speakers including interior designer Nicki Halley;  Angela Keegan from Myhome.ie; Wayne Kirby, Ulster Bank Cork area manager; and Lisa O’Brien, best known for her work as a quantity surveyor on RTÉ’s Room to Improve.

Deirdre Barry of MyHome.ie says Cork has a job market that’s hot on Dublin’s tail and the city is now a globally-renowned centre for tech and pharma. But more than that, there is value for money for first-time buyers when it comes to securing a home.

Of the five most popular searches across Munster, Midleton and Ballincollig in Cork, feature highly. Carrigaline is also an area where there is currently a lot of activity, mainly due to the construction of Janeville, a 111-acre greenfield site which has planning permission for 800 houses, over a phased basis. Development started on site in April 2017 and is now on phase three, with 111 houses sold so far.

The Port of Cork will soon be built in Ringaskiddy, just 5 kilometres from Carrigaline and there is also 10,000 to 15,000 people working in the area, offering good employment opportunities close by.

“A lot of people coming home from Dublin and abroad are interested in Janeville,” says Dan Howard of Dan Howard and Co, agents for the development.

He says that the homes are A3 BER rating, when previously many new builds would only have had a C BER rating. They are HomeBond warrantied, inspected by BECA, and there is transparency with every single house, he adds.

Overall the property market is very good and buoyant in Cork, being driven by a lack of supply, he explains.

“Nowadays first-time buyers are generally in their mid-30s, previously they would have been in their late 20s, so there is a generation catching up which is bringing more buyers into the market.

“The second-hand market is very buoyant also, particularly in the three-bed semi-detached market,” he says.

While good-value-property will be a driving force for anyone considering a move to Cork, there are many other aspects to consider.

“It had a lot to do with the right job opportunity coming up but also, more disposable income and not having to pay as much rent. I can also get outside the city really quickly and into nature so there is a quality of life aspect too,” she says.

Cork is predicted to be the fastest growing city under the Government’s Ireland 2040 strategy.

“With that in mind, there are a lot of exciting new builds happening here. New jobs are being announced every week, there is a lot of strong business confidence and our members are recruiting and expanding, so it’s a good time to move to Cork with the scale of activity and the renewed confidence in the region,” Thatt-Foley says.

“It’s a compact city that is walkable and cyclable. Sixty per cent of people who work here get to work within a half an hour, so there is that huge quality of life piece.”

As well as that, there is a great food heritage in the region with 20 food festivals held each year and the recent awarding of Michelin stars to three restaurants in Cork symbolises the proud food tradition that has been revived.

In terms of schools and third-level institutes, there are many, she says.

“There is a lot of population growth but there are a lot of new schools planned for Cork so this is not something that is presenting as a challenge at the moment. There are a lot of well performing schools in the city that cater for Irish nationals and international students too,” she says.

But it’s job opportunities in the region that are key and Thatt-Foley says many of their members are expanding and hiring. Industries such as pharma and biopharma, IT and cyber are seeing a lot of growth as well as financial services, with the so-called Big Four firms already based in the region.

“There has been a renewed interest in Cork in the wake of Brexit so this is leading to job opportunities. Salaries overall would be on a par with Dublin and the rest of Europe,” she adds.

With so much going for it, Cork is certainly a city that offers the first-time buyer plenty of food for thought.