There’s a buzz about Belfast, the ultimate city break on your doorstep

From Michelin-starred restaurants to the finest contemporary art galleries, experience the city earning the lofty title of Lonely Planet’s number one region in the world to visit in 2018 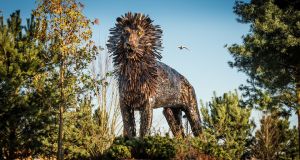 Otherworldly spectacles can be found at CS Lewis Square in east Belfast, which features seven bronze sculptures from The Lion, The Witch and The Wardrobe.

A sizzling bacon Bellybuster from St George’s Market. Punchy, salt-aged beef from the Cathedral Quarter’s award-winning Muddlers Club. The butteriest champ and creamiest panna cotta from Shu on the Lisburn Road. Just a few of the mouth-watering reasons Belfast has become a foodie destination in recent years.

There’s even more to this bustling city than top-notch cuisine, however. Its impressive tourist attractions, cultural offerings and friendly locals have seen it named by Lonely Planet, along with the stunning Causeway Coast, as the number one region in the world to visit in 2018.

And while you’ll undoubtedly leave Belfast with a full stomach, visitors from the Republic should find their wallets far from empty thanks to the favourable exchange rate and excellent value for money on offer. All just a couple of hours’ drive or train journey from Dublin.

Given the range of culinary delights on offer, a Taste and Tour trip is a good place to start your short break. The three-and-a-half-hour Belfast Taster tour includes a traditional Belfast breakfast, a fifteen (a much-loved Northern sweet treat), and a surprise ‘pastie in a poke’ (think of this as Belfast street food). Taste and Tour also organise Gin Jaunts, Whiskey Walks and Meet the Brewer Brewery Tours, and it’s best to book in advance, as the tours often sell out.

There has been a Friday market on the St George’s site on East Bridge Street (pictured below), since 1604 and the current market was built between 1890 and 1896. It holds markets from Friday to Sunday and also plays host to Twilight Market evenings – seasonal events (from Hawaiian-themed summer stalls to an enchanted autumn woodland) with live entertainment, cookery demos and twinkling lights.

If sport is your passion, try and fit in a trip to the Kingspan stadium for an Ulster Rugby game. Or take part in the visitor experience, which includes a guided tour of the 17,500-capacity stadium, changing rooms, dugouts and players’ tunnel.

On the Crumlin Road you can visit Northern Ireland’s only remaining Victorian prison. The gaol dates back to 1845 and ceased being a working prison in 1996. The guided tour documents the daily routines of both prisoners and prison officers, and the imprisonment of women and children. The gaol is also said to be one of Belfast’s most haunted buildings, and visitors can – if they dare – take a paranormal tour of the ghostly hotspots.

More otherworldly spectacles can be found at CS Lewis Square in east Belfast, which features seven bronze sculptures from The Lion, The Witch and The Wardrobe (including a stunning Aslan) in homage to one of the city’s most famous sons. The CS Lewis trail takes you to the places that inspired the Narnia creator, such as 47 Dundela Avenue, where Lewis was born, and St Mark’s Church, where his grandfather was rector.

Evening entertainment can be catered for at the Lyric, the only full-time producing theatre in Northern Ireland, or the beloved Grand Opera House. Visitors to the opera house can also take a trip behind the red curtain, which first rose in 1895, for a backstage tour.

For a vista with a twist, head to the top of the Merchant Hotel, where residents can take in views of the city from its rooftop hot tub.

Named after a secret society that met in the back streets of the Cathedral Quarter more than 200 years ago, The Muddlers Club serves up delicious dishes such as market fish and lamb, gnocchi and asparagus from its open kitchen. The Muddlers Club was crowned best restaurant in Ulster in the Irish Restaurant Awards and its welcoming staff have also seen the restaurant win a number of customer service awards.

Meanwhile, the Michelin-starred OX restaurant overlooking the River Lagan has received rave reviews for its locally sourced, seasonal food and its simple and relaxed setting. Arrive hungry and try the five-course tasting menu with wine pairing.

For a stylish stay in the heart of the city, the Merchant Hotel above has decadent art deco rooms and sumptuous Victorian suites. You can also visit the plush cocktail bar and try making a dent in its 107-page cocktail book, with drinks including the Finn McCool, the Fog Cutter and the Phoenix (consisting of plum-infused poitin, poire eau de vie, fresh lemon, local flower honey and County Armagh apple juice). Rooms start at £99.50 per person sharing.

Or celebrate Belfast’s shipbuilding heritage at the Titanic Hotel. Located in the former headquarters of Titanic shipbuilder Harland & Wolff, many of its nautical-themed rooms (all lanterns and maritime paintings) enjoy views of the Titanic Quarter. Rooms start at £54.50 per person sharing.

And for an excellently located stay, the Maldron Hotel Belfast City is situated just minutes from the Great Victoria Street Railway Station. Rooms start at £49.50 per person sharing.