Fermanagh: discover a land of lakes and legends

Dominated by incredible waterways, centuries of history and five-star food, drink and accommodation, Co Fermanagh is just waiting to be explored 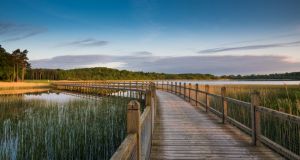 The Collop Walk on Fermanagh’s Lough Erne. The area is a maze of tiny islands abundant with birdlife, while the lower lake is a vast expanse of open water, home to holy islands and ancient artefacts

Even if you think you know Ireland well and have travelled coast to coast, there are always new sights that will appear around a bend in the road. A once-overgrown boreen, a slip of coastline or even a town you have never explored. Sometimes there are whole counties that have somehow been off your radar. Discovering them is always exciting.

Fermanagh is a land of lakes and legends that is less than three hours drive from Galway, only 2.5 hours from Dublin and a short skip from Cavan. It should be known for its magical mist, countless castles, soft skies and warm welcomes, yet it is often overlooked. Which is what makes exploring it even more enjoyable, especially if you are travelling from the Republic and availing of the favourable exchange rate.

Despite its lack of a coastline Fermanagh is dominated by water, thanks to its incredible lakes and waterways. Around most corners, you will catch a glimpse of it - whether the upper or lower loughs of Lough Erne or the river connecting them both. The waterways of Fermanagh are a huge part of its landscape and identity. The upper lake is a maze of tiny islands abundant with birdlife, while the lower lake is a vast expanse of open water, home to holy islands and ancient artefacts.

Between the loughs, sits Ireland’s only island town – Enniskillen. The town, which derives its name from a translation of the Irish “Inis Ceithlean” meaning “Island of Kathleen”, was built around its 16th century castle. The castle now houses two museums – Fermanagh County Museum and the Inniskillings Museum. They showcase the county’s crannogs, castles and early Christian stone sculptures and feature displays that celebrate local craftsmanship such as that from Belleek Pottery, which has a visitor centre well worth a visit on the Donegal border.

Around Lough Erne, the terrain is dotted with the ruins of castles – from the romantic Crom Castle on the banks of the upper lake, to Castle Coole just south of Enniskillen and Monea, a ruin that can be found in a field in between them both.

Castle Coole is, in fact, a neoclassical palace that was built around 1790. It was designed by James Wyatt for Armar Lowry-Corry, the first earl of Belmore, and sits in 700 acres of parkland. Tours of the National Trust-managed palace are available and a highlight is a room that was designed ahead of King George IV’s visit to Ireland in 1821. In more recent years, Castle Coole hosted Colin Farrell and Jessica Chastain for the filming of Miss Julie.

Another National Trust property is Florence Court house and estate, which is set in the foothills of Cuilcagh Mountain. The 18th century mansion was formerly the home of the Earls of Enniskillen – the Cole family - and it is one of the most important Georgian houses in Ireland. Take a tour of the house to admire its collection of Irish furniture. Outside, explore the walled garden, sawmill, ice-house and native Irish woodland.

It wasn’t just human influence that has crafted Fermanagh’s landscape – we also have to thank the Ice Age. Drumlins, erratics and, of course, the lakes all came from that time, if you don’t believe the legends of course. But one of the most impressive geological finds in the area dates back much further and requires a trip underground. The Marble Arch Caves are over 300 million years old and are the most spectacular underground passages in western Europe. Travel beneath the surface of the ground (open from February-November) to explore an underworld of winding passages, rivers, waterfalls and stalactites hanging from lofty chambers.

The caves are part of the Marble Arch Caves Unesco Global Geopark, which has plenty to offer above the ground all year-round and is one of three Unesco Geoparks in Ireland. Explore the Cuilcagh Legnabrocky Trail, a wooden walkway over the bog that gives views of Cuilcagh, Lough Atona and the surrounding area. It is aptly nicknamed the Stairway to Heaven.

Pre-Christian and Christian artefacts are an important part of the story of this region. Evidence from stone carvings suggests that Christianity was accepted far more slowly in Fermanagh than elsewhere in Ireland. Pagan idols have been found on Christian sites and early Christian remains show the strong influence of pagan culture. One especially interesting site is the diminutive but mystical Caldragh cemetery on Boa Island. The island is at the north end of Lower Lough Erne and can be reached by a bridge. The entrance to the cemetery is indicated by a small wooden sign. Follow a laneway to a farmyard, park and walk down a grassy path and through a creaking rusty gate. Here, in a slightly overgrown cemetery surrounded by trees, you will find the two-faced Janus figure.

There is no plaque explaining its history, perhaps because it is somewhat disputed by historians. Despite its name referring to the Roman two-headed deity Janus, many claim the figure represents a Celtic diety – a god, a goddess or both. A hollow between the two heads may have held offerings for the gods. Another enigmatic sculpture sits nearby – the Lusty mana - which is smaller and was imported from Lustymore island in 1939. While you are here, look up the words of Seamus Heaney’s poem “January God” and read it aloud here, in the place that inspired his writing.

Many of Fermanagh’s other ancient sites can only be or are best discovered by boat. Husband and wife team Barry and Helen Flanagan run the Erne Water Taxi service and offer tours to the ancient monastic settlement on Devenish Island. They also offer tours of White Island, also on the lower lough, as well as an Upper Erne Experience, private tours and a foodie trail to take in the best of the county’s food offerings. Don’t miss the chance to stop by one of Ireland’s best-known Victorian pubs Blakes of the Hollow in Enniskillen. Colm Tóibín described the hostelry, which is 125 years old, as a “cathedral of a pub”.

One of Fermanagh’s best-known foodie exports is Pat O’Doherty’s award-winning Black Bacon. The secret to this local delicacy comes back to the islands – the O’Doherty pigs live freely on Inishcorkish Island on Upper Lake Erne and visits to the island can be arranged by appointment.

When it comes to fine dining, acclaimed chef Noel McMeel and his team lead the charge in the Catalina restaurant at the Lough Erne Resort. The restaurant has been awarded 3 AA Rosettes and the team is renowned for their fresh, imaginative and delicate approach to quality produce. O’Doherty’s bacon often appears on the menu which is served in a bright diningroom with vaulted ceilings that overlooks Castle Hume Lough.

Accommodation in Fermanagh is championed by the five-star Lough Erne Resort which sits on its own 600-acre peninsula. A long driveway leads to the Provencal-inspired chateau, which is buttressed by turreted lodges and surrounded by Castle Hume Lough and a Nick Faldo-designed golf course. A warm welcome by the concierge leads guests into the labyrinth-like building where old-world history meets modern luxury. There are thick carpets, regency-inspired fabrics and open fireplaces.

Here the county’s watery landscape is celebrated throughout the building – from lake-view rooms to well-placed armchairs with even the pool in the luxury Thai spa celebrating the landscape with stunning views. Guests have included well-known faces including Rory Mcllroy and Barack Obama – the resort hosted the G8 summit in 2013.

Celebrating its 10th birthday this year, bed and breakfast at Lough Erne starts at £110 per room, based on two people sharing.

If you are not golfing, venture outside to the walkways and cycle paths that meander through the reeds. From any of the hotel vantage points it is easy to imagine how the countryside has inspired writers and artists over the years, Heaney included.

Oscar Wilde and Samuel Beckett attended the Royal School of Portora in Enniskillen in their time and both are celebrated during the annual Arts over Borders festival here. Back inside, perhaps the best way to enjoy an autumn evening is with a book celebrating your favourite of these with a dram of one of the 101 whiskeys on offer in the warm Blarney Bar.

Fermanagh is a landlocked county, nestled between counties Donegal, Cavan and Tyrone. The county town is Enniskillen. It’s a 2.5-hour drive from Dublin, two hours from Belfast and less than three hours from Galway.

One-third of the county is covered by water. The Upper and Lower Lough Erne and its 154 islands dominate the landscape and are a rich part of the county’s tourism offering.

Plan and book your autumn short break at discovernorthernireland.com