Will Sliney, his wife Laura and their son Tadhg in their home in Ballycotton, Co Cork 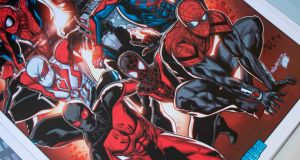 Will Sliney has built a career among some of the greatest comic book illustrators in the world, bringing a futuristic version of the Spider-Man story to life for Marvel Comics. Photographs: Clare Keogh

The ocean and sky compete for attention beyond the huge glass windows of comic book artist Will Sliney’s new home. Perched on a height in the small coastal village of Ballycotton in Cork it offers as dramatic a landscape as you might expect for a man who spends his days among the heroes and villains of the Marvel Comics universe.

Sliney has built a career among some of the greatest comic book illustrators in the world, spending the last few years bringing a futuristic version of the Spider-Man story to life within the pages of the Marvel comic, Spider-Man 2099. From his teenage bedroom he found a way to navigate the distance between the quiet laneways of Ballycotton and the beating heart of the Marvel offices in Manhattan, a place he describes with passion.

“Going to visit the Marvel building is an amazing experience. It’s exactly how you would dream it is. Right now I’m working in the Star Wars office, there’s the Spider-Man office, the Avenger’s office. The Thor room has the Mjolnir hammer that you can go and pick up if you want to. They get random appearances from the actors that are working on the shows and movies too.

“They’re just really cool buildings – it’s such a nice place because people who work in comics, they tend to give over their entire lives to it and so they’re really happy to be in the industry. It’s just a great atmosphere.”

Coming up out of a subway into the teeming streets of New York on his way to work is one of the most exciting experiences there is, Sliney says, but despite how much he loves that city he always dreamt of living and working back in his home village. It’s not hard to see why – the islands, the lighthouse, the fishing boats, the view of the coastline across the bay, the 25-kilometre long sandy beach – they are an irresistible pull on the imagination. Coupled with the technological ability to work anywhere and Marvel’s freedom to allow artists work from wherever they want made a return to Ballycotton the obvious next step in his and his family’s life.

But, bigger than all of that is the chance to live among the people of Ballycotton, he says, a community he talks of with great pride. “A local man down the pub described the small laneway to my house as Marvel Avenue the other night,” he says laughing, capturing in a simple anecdote the powerful connection between people, place and standing in a place as intimate as Ballycotton.

Will and his wife Laura, a teacher and musician, have just had their first son, Tadhg. At only six weeks old the excitement of being parents can be overwhelming they admit but they beam with pride when talking about building their family here in the village. “Local people are genuinely pleased to see another Sliney born in the village,” Will explains. “It’s a rare enough name even around here but it has been in Ballycotton for generations.”

Their home is a modern, contemporary building flooded with light. Its clean, sharp lines bring a modern feel to the site that, while very different to surrounding architecture, somehow fits coherently into the coastal landscape. The house design started with some of his own sketches, Will explains, but it evolved in the hands of architect Dermot Harrington of Cook Architects, who took Will and Laura’s ideas and gave them space to grow and transform.

It’s a process he’s well used to in his day job which sees him take a writer’s script every day and transform it into a visual interpretation that is the fruit of both their imaginations. You can’t always see the full picture yourself, he explains, outlining how all the changes the architect suggested to his original plans really brought their home to life. “It’s a question of trust,” he says. “Just like with comic books you have to be able to hand over your work and allow someone else’s vision take it to the next stage.”

Despite having large models of both He-Man and Skeletor in his studio, the real inspiration for the house and its name comes from his father

The house is both his family’s home and his studio and both functions can flow effortlessly back and forth or allow him to close the door on his work when that separation is needed.

Light floods from every direction and the spaces carved out of the interior and exterior encourage fluidity and a feeling of great calm. It’s a beautiful place and so new that he still fixates on the gifts the neighbouring seagulls leave on his perfectly grey slate roof.

The building is called Grayskull, which comic fans will immediately recognise as Castle Grayskull from the He-Man Masters of the Universe comic series. But, despite having large models of both He-Man and Skeletor in his studio, the real inspiration for the house and its name comes from his father, he explains. When he was a boy, a toy version of Castle Grayskull was every child’s favourite gift for Christmas, but his father couldn’t find one.

So, rather than disappoint his son, he set about building the castle himself which was even bigger and better than the shop-bought version and made him the envy of all his friends. “It’s probably the thing that got me hooked on comics,” he says with pride, reflecting how important a symbol of his childhood the castle became. It also reflects how important family is to his and Laura’s life.

“All our decisions are about our family,” he says. “We chose a table that was bigger than we needed so we would have enough room to have everyone round at Christmas,” he explains. “It’s really important to make that space.”

He admits he feels really lucky right now. His new home, new family, his work, in a place that he loves so much. He had grown up looking at the site they built on but it was always so overgrown with brambles, bushes and trees that even his vivid imagination hadn’t stretched to them finding a home underneath it all.

When they cut back the trees and bushes to prepare the build they found views down to the village pier that they had never expected. “I feel very lucky to have grown up here. I feel especially lucky to be able to do my work from here. I definitely feel that at this point in my life I’m home. One of the funny things about building the house was that so many people said ‘it takes at least three builds to find your true home’ but in my head I was already building my forever home.

“This is the house my kids will grow up in and that’s the garden they will get to play football in. My dream is to be able to continue to do my work while raising a family in this house, in this home. I couldn’t feel more rooted in this place now that I have come back and with so much family around. I can’t wait to have my first Christmas here and start to create the kind of memories that I had growing up across the road. It’s our forever home.”