Sam Gleeson and Niamh Fox at their farmhouse near Ennistymon in Co Clare. 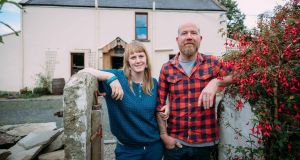 Niamh Fox and Sam Gleeson at their farmhouse near Ennistymon in Co Clare. Photograph: Eamon Ward

Grass runs along the centre of the tapered laneways leading to the Co Clare home of Niamh Fox and Sam Gleeson. The location of their one hundred-year-old property feels incredibly isolated, but they are deceptively close to both Lahinch and Ennistymon, where chef Niamh Fox has just opened her first restaurant, called Little Fox.

Surrounded by 100 acres of woodland, the couple’s home is nestled on a hill, directly at the centre of thousands of trees, and for such an enclosed location, the amount of sunlight that filters through is incredible. The gates to the property were salvaged from a local convent and many other structures have been erected on the land – a yurt for friends who hope to build close by, a mobile home and Gleeson’s workshop, where he designs and makes one-of-a-kind knives. The south-facing vantage is great for the polytunnels and vegetable beds that supply a lot of the food to the restaurant.

Describing themselves as creatives first, the couple have myriad talents: chef, musician, mother and host in Fox’s case; knife and furniture designer, cook, cocktail maker, surfer and dad in Gleeson’s. The couple have a seven-month-old boy, Rowan, who made his welcome appearance just before Fox opened her restaurant. It has been an exhausting but happy time for both of them.

Originally from Inisbofin in Co Galway, Fox knew she wanted to set up home and open a restaurant on the west coast of Ireland, but that she didn’t want to be too isolated, therefore ruling out the islands of her youth. Gleeson, who grew up in Cambridge before moving to Australia to surf, came to Ireland on a whim, working in Dublin’s Fumbally café, before moving to Co Clare.

We meet in the couple’s kitchen, which is filled with items sentimental to both; pots and pans, crockery, books and furniture that have been in both their families for years are speckled around their homely kitchen. At the heart of it is a cast-iron range and marvellous oak table laid with glass. Gleeson’s own knives hang from a magnetic board in the kitchen, impressive in their diversity and size.

Fox says a family connection led them to Clare – her father Flan Fox is from the county and the family attended fleadhs there every summer. “This house turned out to be on the same road my great grandmother grew up on, which I didn’t even know until the local farmer stopped one day to tell me everything he knew about me, and my family,” she laughs.

“Being close to a town was important for me, and I wanted to be somewhere that is quite multi-cultural. The people are very open here, and I was comfortable to open the restaurant in Ennistymon. It’s nice to be able to dip in and out of that – Lahinch is mayhem in summer, but it’s silent here and you can hear the birds sing,” Fox says.

Fox and Gleeson have created a wonderfully inviting home, even though they haven’t done a huge amount to the house since moving in. The bulk of the work was carried out by the previous owners, who had to shoo cows from the main living space and cut down trees that were growing out of the roof.

It’s important to the couple that they understand the narrative surrounding the property. “This house has an amazing story behind it and there is even a poem that goes along with it. Two brothers that lived here in the 1890s went to Australia in the gold rush, came home, built the house and planted the orchard. The house was known as the gold diggers, and in the poem it’s said that on midsummer night, somewhere in the 100-acre wood, the gold that the brothers brought back will shine. We haven’t gone looking for it yet,” they laugh.

The couple have put their own stamp on the inside, mainly by painting walls and adding pieces of furniture, lamps, rugs, tables and chairs that come with a story.

“When friends come to visit they find an item from somewhere I lived before and it brings them back to that time, it could be pots from my nan’s, or a book we would have read together as children,” Gleeson says.

The same theme continues in the restaurant, from the candle sticks, to the chopping boards and knives; most things are second hand, reclaimed or handmade by Gleeson.

The experience of growing and creating food at home also carries into the restaurant.

“Home to me is a place where I can share my experiences, share food from our garden with our friends, and we wanted to incorporate that into the restaurant. It’s the same style of eating in the restaurant as we have here at home; you pick things, then figure out how to use them. There is an open door here, people love coming to stay, and it’s nice to know that we have created a comfortable space for anyone who walks through the door.”

Fox managed to open her restaurant in a little over a month, with a lot of the building and interiors carried out by working a barter system, something she and Gleeson are big champions of.

“The two girls that made the sign and another who made the cushions are getting dinner in Little Fox, and I have been doing swaps of a knife in exchange for work. It’s just nice for no money to change hands and for there to be an exchange of creativity instead. I think there should be more of that,” Gleeson says.

She took ownership of the restaurant when Rowan was just five months old, and says she immediately thought, ‘what have I done’. “There was a huge amount of work to be done, but a lot of friends came down from Dublin and worked hard on the build. I think we have achieved what we set out to. I wanted it to be relaxed, open and bright but to also bring what we have at home – that comfort – into the restaurant. That was important to me. Nearly everything is reclaimed, apart from the kitchen, and things like the old tiles have so much history,” she says.

Fox says she didn’t want to commit to any one particular menu, instead working with whatever produce happens to come her way.

“I knew that one of the community groups had grown too many vegetables this year, so I wanted to be able to facilitate them. For example, they had too many turnips, so I made pesto from the turnip tops that went on the menu. I also got kids to pick lots of blackberries, then traded them for cake and hot chocolate. I then made pancakes from the blackberries that went on the menu, so the way we live translates to the restaurant,” Fox adds.

Despite having so many incarnations before Little Fox, the property has always had a female proprietor, something that delights Fox. The refit also provided much nostalgia for the locals.

“When we stripped the paint off the outside of the restaurant, it had been so many things over the years, people were wandering past spotting a colour and would stop to tell us the story of the bar, or the milliners, all of the things that had gone before,” she says.

Having worked as a chef for 14 years in restaurants, at events and pop-ups, finally being able to put all of her energy into her own place really excites Fox. But she also wants to create a more sustainable lifestyle for herself and the people who work with her. “It’s about balance,” she says.

While both are clearly very much in love with their home, neither commits to staying there forever, with Gleeson still clutching to his dream of a self-build, one day. However, home should be treated as permanent, “otherwise you might not invest in it and give the space your all,” he says.

If this is our home forever more, then that’s amazing

“When I lived in Australia, there was this spot I used to surf every day, and a sign that said ‘home is where the heart is’. I’ve thought about this a lot down the years and it really doesn’t matter where you live, it’s what you put in to it.

“If this is our home forever more, then that’s amazing as we’ve planted 1,000 trees, we grow our own produce, we had our son here and will probably have more kids here. If it ends up being someplace else, or we take the kids off travelling, I will feel lucky to have had this amazing space to be creative in,” Gleeson says.

Next week: Cathrine Burke of Breac.House retreat in Co Donegal