Meet the Irish organic food brand that went with its gut

Blakes Always Organic is on a mission to bring the probiotic benefits of kefir to an Irish audience, thanks to the Food Academy programme 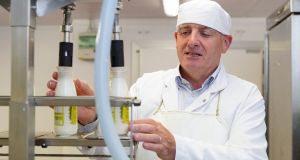 After discovering kefir at a lecture, Sean McGloin of Blakes Always Organic bought a second-hand milk tank, remodelled it and got a license to start making the product. Photographs: Conor Mulhern

If you’ve ever wondered what kefir and buttermilk have in common, then Sean McGloin, technical director of Blakes Always Organic, based in Drumshanbo, Co Leitrim, has the answer.

Kefir, which originated in the Caucasus Mountains in the former Soviet Union, is a probiotic that’s useful for gut health. And buttermilk, that old Irish staple beloved of your granny? “Around 50 to 60 years ago people in rural Ireland would have drunk buttermilk for good health, so it’s similar,” he points out.

We may be just a little bit more sophisticated these days, but we’re no less interested in our health and wellbeing. It was the now highly fashionable fermentation aspect of making kefir that first piqued Sean’s curiosity. The process is used to make yoghurt, cheese, kombucha and kimchi, and Sean discovered kefir at a lecture he attended, where a doctor explained the helpfulness of probiotics. “He recommended kefir, a fermented milk drink similar to thin yoghurt, as a good source for probiotics. Preferably it should be made from organic milk,” he says.

Around the same time, Sean’s baby son was resuscitated after a near cot death and was left with severe brain damage. It was an incredibly trying time. “I was walking the floors with him at night, getting one or two hours sleep, then going straight to work. I was taking kefir at the time and I felt it was the only thing giving me some energy. I suggested to my business partners that we should look at it as a commercial product. However, we had no understanding of how we might commercialise it, in terms of scaling it up,” he recalls.

After doing some research, Sean bought a second-hand milk tank, remodelled it and got a license to make the product. Blakes Always Organic now produces about 2,000 litres of organic kefir per week.

Fermentation is an ancient technique – and it hasn’t changed much – Sean says, of the process of making the drink. “It’s a very simple system but done the same way it would have been 100 years ago. The milk is warmed to a certain temperature, and a culture is added. Then it’s left to ferment. In cold weather it will take longer to do a batch,” he says.

The company buys its milk from a group of six organic farmers in the west of Ireland and the quality of the land used for grazing is hugely important, as good soil creates nutritional foods. “How the cattle are farmed has an impact on our product. It has a different taste profile as it is organic and we use a whole milk. It gives a very creamy taste,” Sean says.

But the unique selling point of kefir has always been the health benefits – as a natural probiotic, it gets your gut working properly. Blakes Always Organic has a loyal customer base because of this, with people often picking up several bottles from their local SuperValu at a time.

“Children with constipation, people with IBS or stress and depression are taking kefir,” Sean states. “It doesn’t cure these things but creates the right conditions in the gut to help with many of these illnesses,” he says.

Kefir is often drunk after a main evening meal too, when you might have that “bloated feeling”.  “Nutritionists suggest that you take it late at night – ideally 125ml – but the reality is people drink more. Your body tells you if you want it or need it. Personally, I might drink it every day then stop for five or six days. It gives you energy – that get up and go that you might be lacking.

“Currently we only do a natural flavour because we are afraid that adding sugars would kill off the good bacteria needed. At home you can add it to things like your smoothie – that way there is no time for the sugars to damage the good bacteria,” he says.

Blakes Always Organic currently employs five staff, all living and working in the Drumshanbo area. As well as making kefir, in 2016 the company launched Blakes Always Organic Culture Blend coffee, which won the Bord Bia Organic award in 2017 in the Best Prepared Product category. Coffee sales have trebled during the recent Covid-19 lockdown.

However, it is kefir that Sean is passionate about. “We haven’t promoted ourselves much yet because we need to work on people understanding kefir. Currently we don’t have a massive customer base but we do have a very loyal one. We might have 10 people in each shop that buy and take it on a weekly basis. It comes in 250ml and 750 ml packaging but those customers could be buying five of the larger bottles at any one time, because they know the benefits of it.”

SuperValu helped us work on budgets and our health and safety

Most of Blakes Always Organic sales are made through the SuperValu network. Sean credits the supermarket chain and its Food Academy programme, which supports small Irish food and drink producers, with opening many doors for them at a level that they could not have achieved by themselves.

“We were working with the County Enterprise Board and then started a pre-training programme with SuperValu,” Sean recalls. “They helped us work on budgets and our health and safety and then we went on to a Dragons’ Den-style pitch to be accepted into the Food Academy.

“They picked us as one of the companies to go forward and be stocked in six shops local to us. When we did well out of that, we could expand out and go into another six to 12 shops. SuperValu was very supportive; we could do live tastings in the shops and took part in Taste of Cavan. We have transitioned from something small, to now being in 60 shops. It really has worked for us,” he says.

“SuperValu would take just six bottles at a time and then allowed us the flexibility to put out more as we grew,” he adds. “Most of our sales, about 70 per cent, are going through SuperValu. A lot of people who have been taking our products up to now have been doing so for an illness and did not have the same access to shops during Covid-19, so sales went down, but in the last two weeks they have increased again,” he says.

The future looks bright, and the company has plans. They now want to build a suite of kefir products, including a vegan water-based one. “These are premium, high-end products that will complement the kefir we already do,” he says, adding, “we are hopeful of getting the name out there and building the brand more, both this year and next.”

Food Academy provides support for Irish and local food and drink producers, as well as superior quality products to discover in all its SuperValu stores.