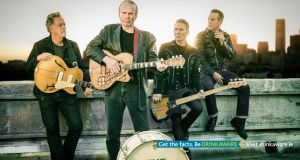 Smithwick’s Kilkenny Roots Festival runs this May bank holiday weekend, (from May 4th to 7th), with over 40 Irish and international acts to enjoy over the course of four days. Celebrating its 21st birthday in 2018, some of the finest names in Americana/Roots have made their way to the city, with several shows already sold out.

John Cleere, director of Smithwick’s Kilkenny Roots Festival, says that with over 30 venues to choose from, there is likely to be something for all music lovers. “People are surprised when they come along as there’s a very relaxed vibe. It’s not out in a field and with nearly 30 venues involved, people move around a lot and if they don’t like a band, they can move on, with the free Smithwick’s Music Trail. Twenty-three events are ticketed but there is no cover charge for the rest.”

He describes the music as “broad spectrum” with a lot of Americana/Rockabilly acts set to take to the stage. Cleere says they are expecting over 5,000 ticket holders and there is certain to be a “great buzz” around the city.

“These are acts that Irish audiences would not be that familiar with but we already have 11 sold-out shows and I don’t think any of those are household names. People are willing to take a chance on something new. Many bands have played here and then gone on to bigger things. “Three years ago, Sturgill Simpson went straight from playing here to playing on Jools Holland, and from that he went on to be number two in the US Billboard Charts. I think the only reason he didn’t go to number one was that it was the week Prince died and he of course took the number one slot,” he says.

Such is the love for this music event, many devotees, both audiences and musicians, return to the festival year on year. It started in 1998, and Cleere says it was born out of a need for Kilkenny to extend the tourist season.

“We had the Comedy Festival and the Arts Festival but not a whole lot else was happening earlier in the season, so we went for the beginning of May with the Smithwick’s Kilkenny Roots Festival. Local businesses love it and it kicks off the summer for everyone. It’s not weather dependent because it’s quite a compact city – a 15-minute walk from one end of the town to the other, so revellers can hop into the nearest pub and listen to a little bit of music if it rains,” he says.

Smithwick’s has been the main sponsor of the festival since its inception and Cleere says Smithwick’s was the perfect fit, given that they are based in Kilkenny and are synonymous with the city. “It was a natural match. They were looking for a quality event that they could buy into but they leave it to us to run it and are very happy with it every year,” he says.

Cleere’s top three picks for the weekend include Boston indie folk band, Darlingside, who he is singling out as the potential break-out act this year. “I’m also looking forward to seeing Michael Nau, he’s playing in small venues but he’s a superb performer. I also can’t wait to see The Deep Dark Woods, a band from Canada who have been coming here on and off for 10 years or so.”

Gigs kick off from early afternoon until late into the night, across the bank holiday weekend with times differing depending on the venue. There will be a choice of ticketed and free shows popping up across the city in some of Kilkenny’s favourite venues.

Smithwick’s: ‘forging our own path, excited by every possibility’

Smithwick’s has been brewing great ales since 1710; forging our own path, excited by every possibility, and learning at every moment along the way. Back then our soundtrack was the sound of beer being brewed and barrels heading off across the country. Smithwick’s has always been about doing what we love but most importantly, enjoying the journey along the way – and a long journey it has been, over 300 years to be exact.

A perfect blend of mild hops, sweet malt and roasted barley has earned it its rightful place as Ireland’s most loved ale. Seven time gold medal winner of the Monde Selection award.
ABV: 3.8%.

Late hopped with amarillo hops for a fuller, fruitier flavour. Amarillo hops are grown on the Pacific coast of America. They are amazingly aromatic and produce great grassy/piney flavours. Grand gold winner of the 2015 Monde Selection Awards.
ABV: 4.5%.

Brewed with Polaris hops to create a delicate refreshing ale with a subtle fruity/floral aroma. Malt and a touch of roasted barley combine to give it its light golden colour. It has subtle malty biscuit flavours and a crisp finish.
ABV: 4.1%.