Follow your passion: the power that fuelled a 23-day solo speed record around Ireland

Mick O’Meara is the fastest sea kayaker to ever circumnavigate Ireland. Here he tells us how and why he did it 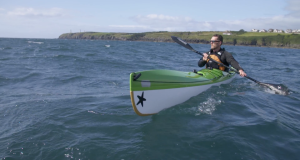 It may be two years since Waterford paddler Mick O’Meara reclaimed the round-Ireland kayak speed record but the memory of 23 days of lashing rain and fierce winds is as fresh as ever. Increasingly popular with elite kayakers, the round-Ireland trip is a serious challenge and to do it solo and unsupported is as much a psychological test as a physical one.

Huge tidal conditions, unpredictable weather and the struggle of isolation on the 1,200km route have prevented a number of would-be challengers from taking the crown since. But it’s only a matter of time O’Meara says, confident that if he had got the weather right he could have gone even faster. He sees 21 days as an achievable goal.

His record stands at 23 days, having paddled around the clock for 21 of those. He lost two days sheltering on the south side of Donegal Bay during stormy weather. “Danger is always present at sea,” he says. “You just can’t predict it, even in summertime when I did this trip.”

His longest day was a 10-hour, 120km paddle and to make best use of the tides he was on the water some mornings at 3am. As an unassisted trip he had to carry all his own provisions and camping equipment. Assisted trips normally have a van driving ahead to carry provisions and to set up camp.

“I came off the water some days in a terrible condition,” he said. “Freezing cold, in pain, exhausted. Some days I had to ask myself why I was doing it and could I even continue.”

It was the challenge, the passion to be the best I could be. That’s what excites me

Sleeping in tents and with his kayak stuffed with kit, he encountered minke whales, dolphins, basking sharks and even a mini-tornado – a spiral of water rising up off the sea under sheer cliffs on the west coast. “There were frightening times,” he said “but exciting ones too. Ireland has an incredible coastline. It’s a fantastic journey to complete on your own but mentally it's very tough.”

This is the second time O’Meara has taken the round-Ireland speed record, having lost it in 2011 to UK-based paddlers Jeff Allen and Harry Whelan, who completed the trip in 25 days.

Breaking the record wasn’t really what drove him, he says. “It was the challenge, the passion to be the best I could be,” he says. “It’s you against the elements. That’s what excites me – that’s what makes it a true expedition. But also it’s the sense of freedom, being so close to the water and to nature.”

As well as the round-Ireland speed record Mick O’Meara also holds the speed record for an Irish Sea crossing with paddler Brian Fanning, completing the Wexford to Wales journey in nine hours and 38 minutes. He has won the International Liffey Descent seven times and is a three-time winner (with Jim Morrissey) of the 125-mile non-stop Devizes to Westminster canoe race, considered the toughest in the world.

For anyone inspired by O’Meara’s accomplishments he maintains you “just have to get out and experience life, no matter your age or circumstance. My advice is to follow your passion.”

The Koleos is designed to be noticed. With an athletic, robust front end, roomy seats and full LED lighting signature the SUV is both assertive and confident. This design character continues in the interior with lots of room, ambient lighting, a panoramic roof and a large touch-screen tablet.

Interiors
The interiors are built around space and comfort and enhancing accessibility. The cabin’s heating, ventilation and space create a great sense of comfort with multiple storage areas and sliding armrests ensuring that the cabin remains a place that works for passengers.

Technology at its heart
The Koleos driving assistance technologies make driving easier. Keep your distance, adapt your lighting, emergency braking, even parking is easier. Coupled with the R-Link 2, a large touch screen tablet that allows you to control the vehicle functions including multimedia, telephony and driving assistance systems, safety and connectivity are perfectly combined. The Visio System co-pilot has a camera located at the top of the windscreen and alerts the driver in three ways:
- Traffic sign recognition with speed alert
- Lane departure warning
- Automatic switch between main beam and dipped beam headlights

For more on the Koleos see renault.ie