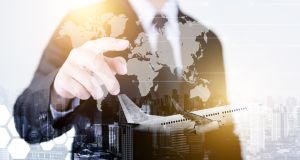 “Ireland is a critically important hub for aircraft leasing and financing. The list of competitors includes Singapore, Hong Kong, Tokyo, China, New York and London, but the greatest concentration of leasing talent and expertise in the industry is here in Ireland.” Photograph: iStock

Ireland’s unrivalled track record in the aviation leasing space, its deep pool of talent and the supporting infrastructure which has grown up around the industry have combined to make the country a global hub for the sector.

That track record dates back to the 1970s when the late Tony Ryan and his colleagues founded GPA, Ireland’s first aircraft leasing company.

“GPA was one of the first aircraft leasing companies established anywhere in the world, and at a time when the concept of leasing aircraft was truly in its infancy,” says Carr.

“Successive Irish governments then negotiated the reduction of double taxation on aircraft lease rentals in its network of double taxation treaties. That foresight supported the business-friendly positioning of Ireland in the industry.”

The growth of the operating lease market since then has been nothing short of dramatic. By the year 2000 approximately 20 per cent of the world’s fleet of commercial aircraft were financed through operating leases. “That figure is now about 40 per cent,” says Carr, “with a significant share of those aircraft being owned or managed by Irish-based lessors.”

He says operating leases are attractive to airlines for several reasons.

“Leasing is a cost effective form of financing for most airlines. Equally important is that leases also provide airlines with considerable flexibility in how they manage their fleets.

“Major lessors, in diversifying their portfolios across different aircraft types, lessee credits and lease maturities have developed very strong access to the capital markets. Airlines can’t achieve those diversification levels, so lessors can use this cost advantage to provide attractive leases to airlines across the world.

“Furthermore, for start up airlines or for those who don’t have the ability to raise funds themselves at reasonable rates on the debt markets, leasing is critical in providing access to both aircraft and financing.

“But again it is not just about price, airlines also appreciate the flexibility which leasing allows them in managing their fleets where they can avoid having to own all of the aircraft they operate, which frees up the capital necessary to fund the long-term commitment which aircraft ownership entails.

“Airlines use leasing as a means of adjusting their fleets to changes in their business, rearranging both the number of aircraft and the mix of aircraft types in line with their changing fleet requirements.

“The overall proportion of aircraft which are leased probably won’t continue to grow beyond 50 per cent of the global fleet, but the aviation industry itself continues to grow and will drive the continued expansion of the leasing sector.”

Carr says “growth is being driven by the twin forces of economics and demographics where the increased level of disposable income available to a growing middle class globally is driving demand for airline travel. Demand for aircraft and financing grows along with that.” And Ireland is at the epicentre of that growth.

“Most of the major lessors have significant operations in Ireland,” says Carr. “The talent level within the Irish industry today is phenomenal. Our schools and third-level colleges are producing a generation of new talent coming through which is truly world class.

“At PwC we are committed to assisting in this development, and we support that grass-roots activity through our involvement with IASA, the Irish Aviation Students Association.

“We have also recently launched a professional educational programme in collaboration with ISTAT, the International Society of Transport Aircraft Trading, to build on that education platform and embed great talent further into the industry. The future is very bright for the industry here.”

There is competition but Ireland’s position is well established.

“Ireland is a critically important hub for aircraft leasing and financing. The list of competitors includes Singapore, Hong Kong, Tokyo, China, New York and London, but the greatest concentration of leasing talent and expertise in the industry is here in Ireland.

“That’s not limited to the aircraft lessors as the surrounding infrastructure includes consulting firms, government, airlines, the Irish Aviation Authority, legal firms, technical advisers and professional services firms who all come together making Ireland a fantastic jurisdiction to run an aviation finance business.

“The vast majority of companies end up in Ireland for those reasons. If you are in this business in any meaningful way you need to be in Ireland.”

It would be wrong to think of the Irish aviation finance sector as being purely based on aircraft leasing.

“Too often we focus on Ireland’s contribution solely in terms of our contribution in building the operating lease market, but this is not the full story. Japanese Operating Lease with Call Options (JOLCOs),

Enhanced Equipment Trust Certificates (EETCs) are examples of structures used by the airlines to finance the 50 per cent plus of the aircraft which they own directly.

“Irish lessors and arrangers are actively involved in developing these financing techniques. Also, through structures such as Asset Backed Securitizations (ABS) and Aircraft Investment Funds, Ireland is finding ways to assist in bringing new investors into the aviation space where lessors and arrangers here are early developers of new and innovative aviation finance products which will be attractive to both investors and the airlines.”

The PwC Aviation Finance Advisory Services Team has been established to strategically guide and support stakeholders throughout the entirety of a deal cycle across all aspects of commercial aviation.

“The team includes highly experienced aviation specialists who have worked in the aircraft finance sector as financiers, appraisers and advisers to airlines, lessors, investors, banks, manufacturers and governments.

“Our focus is to provide first-class advice to new investors seeking to enter this space, to both investors and airlines as they seek financing, to provide due diligence for investors and lenders across a broad array of opportunities and, finally, on the growing M&A activity in the industry.”

Looking forward, he sees maintaining an efficient business environment and building on our success in education as key areas of focus to retain Ireland’s leading position in the aviation finance sector.

“Our education system continues to provide incredible talent, and we must continue to foster that. It starts at second-level really, where we should ensure that young people are aware of the vast array of opportunities this industry provides.

“Aviation needs people with skills across the board, including for example, technical knowledge gained through airline apprenticeships, marketing talent, those with financial and legal backgrounds, human resource management, portfolio management, all the way through to general management.

“Ireland holds a great position in this growing industry – let’s make it even greater.”