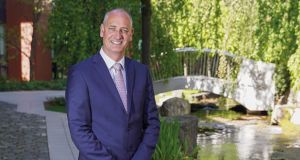 Pfizer was among the first wave of pharmaceutical companies to locate in Ireland when it established its first facility in Co Cork in 1969. Since then, the company has invested $8 billion in its Irish operations which include manufacturing, shared services, research and development (R&D), treasury and commercial operations.

“We are a major contributor to Ireland’s economy,” says Paul Reid, Pfizer Healthcare Ireland's country manager. “We are the largest single pharmaceutical investor and a significant employer in the country. We’ve built up a rich heritage of innovation and expansion over that time. Today, we employ 3,700 colleagues in six locations in the counties Cork, Dublin and Kildare. Ireland is Pfizer’s biggest investment outside of the US.”

The Irish operation is responsible for commercialising leading medicines in the fields of inflammation, cancer, vaccines, haemophilia, pain, stroke, rare diseases. “Ireland is a leading manufacturing base for Pfizer globally and we distribute to more than 100 countries around the world,” Reid adds.

Looking to the future, Reid explains that the company has recently undergone a fundamental change in policy. “Our new chief executive, Albert Bourla, has spent the past few months revising our purpose,” he says. “That new purpose is innovating for growth, to deliver breakthroughs that change patients’ lives.

"We must advance scientific innovation that significantly improves current standards of care and another priority is advancing innovation that addresses patient access and affordability issues.”

Continued investment in scientific R&D will deliver these breakthroughs. “Scientific R&D is at the heart of fulfilling Pfizer’s purpose as we work to translate advanced science and technologies into the therapies that matter most,” says Reid. “We continue to see a strong stream of R&D approvals. In 2018 alone, we received seven key approvals, all of which are important developments in helping reduce the impact of disease on patients.”

The company’s R&D efforts are focused on a wide range of illnesses and disease including cardiomyopathy, lung cancer, acute myeloid leukaemia, alopecia, and severe pain. “Only recently, we received approval in the US for one of our leading cancer medicines for breast cancer in men,” he adds.

“We are living in a golden age in terms of drug discovery and pharmaceutical innovation. The strides made in the last decade – in discovering new treatments and, sometimes, cures, for devastating diseases – surpass those made across many previous decades. We now want to spend more time on improving standards of care and delivering breakthrough medicines to address unmet needs. We want to put 25 new medicines into patients’ hands by 2025. We have 80 molecules in our research pipeline from early stage to registration. It’s the deepest and strongest we’ve ever had. It’s a very exciting time for colleagues, especially for those in Ireland.”

And it stands to get better. “We are changing the way we discover new medicines,” Reid points out.

But there are challenges to be faced. “We need to ensure that our innovation and risk-taking is recognised while doing all we can to ensure affordable access for patients, “Reid explains. “Only one in every 10,000 researched molecules will make it from the lab to an approved medicine for patients.  This is very costly; Pfizer invested more than $8 billion in scientific research and development in 2018 alone.”

This investment is focused on a number of core areas which the firm believes are most likely to bring unique and transformative therapies to patients. These include chronic inflammatory and autoimmune diseases, vaccines, oncology, cardiovascular and metabolic disease and rare diseases.

“The key to our approach is collaborating in new and dynamic ways with other innovators across the health landscape including academic scientists, patient foundations, governments, other biopharmaceutical companies and treating physicians,” says Reid.

Gene therapy is one area which holds particular promise. Pfizer recently acquired a 15 per cent stake in Vivet Therapeutics, an emerging biotechnology company developing gene therapies for rare diseases, to collaborate on a proprietary treatment for Wilson disease – a rare genetic disorder which, if left untreated, can cause liver disease, central nervous system dysfunction, and even, death.

“We are also working in partnership with Sangamo Therapeutics, a genomic medicine company, on gene therapies for haemophilia A, amyotrophic lateral sclerosis and frontotemporal lobar degeneration,” Reid adds.

“In Ireland, we have a significant partnership with Science Foundation Ireland where our R&D group at Grange Castle partner with leading academic researchers from universities around the country in early-stage research.”

The impact of medicines on patients and society needs to be better understood, according to Reid. “We can quantify the value of medicines to patients, to society and to the healthcare system,” he notes. “We can count the number of years they add to a person’s life, we can look at whether the medicine enables the person to work, or live independently, or simply enjoy life more; we can calculate the money saved when a medicine helps a patient avoid surgery, hospitalisation or admission to a nursing home.”

However, the affordability issue is central. While the discovery and development pipeline is rich, the risk to reward ratio is changing. There are few, if any, areas left to produce new blockbuster medicines. The new medicines will be used to treat much smaller patient populations.

“The cost of R&D doesn’t decrease with the size of the patient population,” says Reid. “We need to work hard as a company to improve access for patients to new medicines. We are going to have to look at new partnerships and evaluate outcome-based systems for reimbursement. New risk-sharing payment models need to be investigated. We need to make the new medicines available and do it quickly; a lot of patients don’t have time to wait.”

We also need to work with the government on horizon scanning to better predict the new treatments which will arrive in the longer term. But it’s also hugely important that these new medicines offer a value above and beyond those already available. They have to offer significant additional value.”