For these chefs, gluten-free menus are never an obstacle to incredible flavour and choice 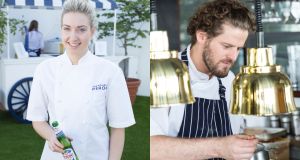 Inspiring flavour: top Dublin-based chefs Aoife Noonan and Killian Durkan don't let gluten - or the lack of it - hold their recipes back

Gluten free used to mean a dry piece of fish or steak and sprinkle of limp salad leaves when dining out, but restaurants and chefs are now offering lots of creative, delicious gluten-free options for people who have coeliac disease or a gluten intolerance on their menus. And most importantly, there is no compromise on flavour. To mark the release of Peroni’s gluten-free beer, Peroni Nastro Azzurro Gluten Free, we asked three chefs to share the ways they cater for the gluten-free diner with exceptional savoury starter and main dishes, and even sweet treats and cakes.

“You have to base your dessert around a flavour, not a limitation. It’s not ‘oh well this is the gluten-free dessert for the coeliac,’ it’s ‘this is a dessert, oh it happens to be gluten free, but it’s delicious anyway’.”

You want the gluten-free diner to have a fantastic meal

“You want the gluten-free diner to have a fantastic meal and you want them to remember that meal regardless of if there is gluten in their meal or not. It’s definitely about the knowledge of the chef and them being creative with what they can do. Sometimes it can be a challenge, especially with desserts, so it’s about creating a menu that will cover all your bases. If someone comes in and they do have an allergy, there is an option for them and they’re not feeling short-changed,” she said.

“Restaurants now definitely have to adapt to the fact that people are coming in with specific dietary requirements. It is really important that staff, as well, educate themselves on allergens and how they can affect people.”

Life without gluten does not mean you cannot enjoy pastas, breads or cakes, says Noonan, but sometimes a substitute ingredient does not work because of the chemistry.

“Gluten is the ingredient that gives (bread) the soft, pillow-like bready texture that you love. So if you substitute it with a gluten-free flour, you’re not going to get that result. A lot of gluten-free products might be a little denser in texture and gluten-free shouldn’t be a barrier to creating a great taste, but sometimes it does affect the texture especially when it comes to baking and pastry. It’s more of a science and it’s more about the chemical structure of an ingredient, it goes a bit deeper than that.”

The key to finding out new ways of still having your cake and eating it, according to Noonan, is lots of research and experimentation with substitutes.

“There are so many things now that you can experiment with, like buckwheat flour is a really good one. Buckwheat is actually not a wheat, it’s a pseudo-cereal so it’s kind of got a nutty taste and gives a really lovely texture and it’s naturally gluten free because it’s not wheat. Rice flour is really nice as well in making cakes because it gives a really light texture. But what I would use mostly in the restaurant would be almonds or polenta instead of flour. You just have to experiment.”

“Gluten-free is not a barrier to good flavour, it’s not difficult to do a menu that is gluten-free,” said chef Killian Durkin, “it’s easy enough to make things tasty without flour, and there are ways and means.”

Killian Durkin is head chef at Charlotte Quay in Dublin. He is formerly of La Mère Zou, and Thornton’s, Marcel’s, Dillinger’s and the Mermaid Café all feature on his CV.

The majority of the dishes on their restaurant menu are gluten-free or can be adapted to be gluten-free. “There are only two starters on the menu out of eight that have gluten in them and pretty much all the main courses are gluten-free.

The quality of gluten-free breads, pastas and cakes has improved dramatically

“With anything, like coeliac or lactose intolerance, it is easy to accommodate diners given enough notice. If you ring up when you are making a booking to say somebody at the table is gluten intolerant, if you are given 24 hours it’s not an issue, and you can always accommodate them during service but it just makes life a lot easier when they give you prior notice.”

Durkin thinks things have definitely improved for those seeking gluten-free options like bread when dining out that are excellent. However, it is not always about a replacement for something with gluten, it is to make the dish shine, gluten or no gluten.

“Compared to 15 years ago, the quality of gluten-free breads, pastas and cakes has improved dramatically. But you don’t want to actually just give the diner gluten-free pasta and bread, there are a whole variety of things they can order that don’t have gluten in them that are still satisfying.”

Martin Montgomery was aware of cooking without gluten from a very young age as his mother has an allergy to flour and eating out for her “could be a real pain.”

Montgomery is head chef at the Exchequer restaurant in Dublin and has worked in Coppinger Row in Dublin, and No 27 Talbot Street in Belfast. This year he created an entirely separate gluten-free menu option for diners with a gluten intolerance or coeliac disease.

“It is very important to us to that those with a gluten allergy, and it is so common now, could come in and don’t feel excluded. It’s amazing how common it is and how many people suffer from it. We wanted to put this menu together for people with gluten intolerance. Rather than people coming in and we would give them this option or that option, we made an entire menu that was gluten free which is adapted from the a la carte menu.”

Montgomery says that there has been a very positive reaction to it and it is very popular. He says there are simple ways to accommodate diners who have a gluten allergy and there should not be a compromise on taste, it is all about being creative and using the very best, fresh ingredients.

“We don’t use much gluten (in the kitchen) and there is no gluten in our sauces at all. It’s easy to do. With fish and chips, instead of using a batter, we pan fry it. It’s just little simple solutions. It doesn’t restrict us in any way with flavour at all. We are making everything fresh so we have 100 per cent control. With good fresh ingredients, you can’t go wrong.”

Montgomery says that chefs have the expertise to create incredible dishes, regardless of a gluten allergy.

“Those with a gluten intolerance shouldn’t feel restricted when they go out for something to eat or worried about what they can eat, that should be our job. At least three or four diners a night in the restaurant will be coeliac, so it is quite common. So you have to move with the times.”

Peroni’s Italian brew masters have perfected a gluten-free recipe for Italy’s most iconic beer – without compromising on taste. Peroni Nastro Azzurro Gluten Free has the same delicate balance of bitterness and citrus aromatic notes as Peroni Nastro Azzurro, as well as the trademark refreshing, clean finish.

Gluten-free recipes from the kitchens of top Irish restaurants