The key to this tempting feast is getting your prep done well in advance, says the expert chef. That way, you can relax and enjoy the day alongside your guests

Derry Clarke and wife Sallyanne will be entertaining at home this Christmas, and their turkey main course will be served with a chilled Chenin Blanc. Video: The Production Company. Photography: Al Higgins. Styling: Lesiele Juliet 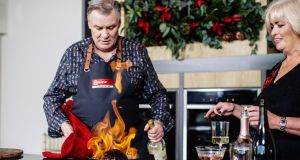 Derry Clarke and wife Sallyanne will be entertaining at home this Christmas, and their turkey main course will be served with a chilled Chenin Blanc. Video: The Production Company. Photography: Al Higgins. Styling: Lesiele Juliet

Christmas is usually a time for experimentation in chef Derry Clarke’s kitchen, forgoing the usual turkey and ham for duck or pheasant, but this year the owner of Michelin-starred restaurant L’Ecrivain will be revisiting favourite dishes from his childhood.

Last week Derry prepared a starter of homemade cured salmon, and now he turns his attention to the main event. “I think this year we have to go back to our roots, we need comfort – Christmas is turkey and ham. I do alternatives most years so this is the first time in a long time I’m going completely by the book,” he says.

Derry and wife Sallyanne have been welcoming guests back to the restaurant for the Christmas season as restrictions eased, and the couple will be welcoming a small number of guests into their home for an intimate Christmas day dinner too. It’s something he and Sallyanne enjoy as relaxed hosts. Due to smaller numbers all round this year, Derry says be mindful when choosing a turkey.

“I’ve heard it said that people are looking for much smaller birds this year due to gatherings being kept to a minimum. Don’t get too big a turkey – a 5kg bird will feed 10 people and you don’t need to load the plate.

“A free range turkey is probably what many people get. An organic bronze is quite expensive but it’s worth it as it’s a bit more gamey – there is more flavour, but an ordinary farm reared turkey is fine. You inject the flavours into it. If you’re a small family of four you could just spend a bit more on a really nice organic chicken instead,” he says.

In a move that may surprise some Clarke doesn’t stuff his turkey. “There are a few reasons for this,” he says. “You’ll get cold spots because it will not cook through in time and it also slows down the cooking of the bird. Instead, I stuff the cavity with onion and oranges.”

His approach is to make a delicious stuffing separately and cook it in foil or a terrine dish. “You can also make a dry stuffing on the pan, cook crispy breadcrumbs and sprinkle it over your meat. For the gravy, you can use the juices – but don’t be afraid to use granules,” he says.

Rest a turkey for as long as it takes to cook it, so if you cooked it for two and a half hours then rest it for the same amount of time

In order for the chef to enjoy the day, Clarke advises plenty of preparation in advance of 25th December.

“Potatoes should be peeled the night before, and the vegetables blanched. I get the turkey on as early as possible because I leave it to rest for a really long time – at least an hour. Rest a turkey for as long as it takes to cook it, so if you cooked it for two and a half hours then rest it for the same amount of time.

“We have one and a half ovens, so I use the smaller one for resting. I flick it to 65 degrees, let the turkey cool for ten to 15 mins, then I put it into the holding oven and leave it there to relax,” he says.

One of the reasons Clarke enjoys cooking with the Neff oven is the unique Slide & Hide door.

“It has a great feature where the door opens and swings inwards – so there is nothing in your way as you baste or check on the bird. The steam feature is great too, as it injects moisture into poultry.” Neff ovens also come with CircoTherm, a fan design that delivers faster cooking capabilities.

In terms of sides for the turkey, “I do two simple vegetables and two potatoes, you don’t need any more than that. That’s where the work is, and let’s face it, the majority of people don’t do the cooking on Christmas day – so it is a lot of work for one,” he says.

Brussel sprouts can be a little controversial – people either love or loathe them. “A lot of people don’t like sprouts, but that’s because they get overcooked and then they’re disgusting. I do them with chestnuts,” Clarke reveals.

“Don’t over-elaborate with the vegetables because you’re putting flavour on top of flavour and then it is an overload, and you already have two big dishes in the turkey and ham.

“For the ham I boil, glaze and cook it two days before, then I leave it on a chopping board with a tea cloth over it and anyone can come along and take a slice of it in the run up to Christmas – it makes a great sandwich,” he says.

While the meat eaters get a serious look in during the festive season, “It’s also important to think of the vegetarian or vegan guest”, Clarke says. “Simple roast root vegetables tossed in honey and thyme with a little yoghurt, perhaps, is lovely.”

No Christmas meal would be complete without something deliciously chilled to drink alongside. “We’ll be serving a nice chilled South African Chenin Blanc with the main course on the day,” he says, adding, “The best piece of advice I can give is to have as much as you can ready in advance so you can relax on the day, and enjoy your guests.”

Wash and dry turkey. Remove the wishbone, tuck the wings under the body. Make a pocket between the skin and the breast meat. Mix the parsley and butter, and fill the pocket. Put one onion (halved), orange, thyme and bay leaves into the cavity. Tie the legs together with twine.

Place the rest of the onions and garlic on a large roasting tray. Place the turkey on top, brushing all over with vegetable oil. Season well with salt and pepper. Add chicken stock and cover loosely with tin foil.

Place in a pre-heated oven at 150 degrees for 1 hours. Remove tin foil and cook for another 1.5 hours at 180 degrees until core temperature is 70 degrees. Keep basting the turkey regularly – every 10 minutes during the total cooking time.

When the turkey is cooked, rest for at least 1 hour in the oven at 60-70 degrees to allow juices to settle and make for simpler carving.

To carve, remove both legs in one piece each and leave to one side. Cut along the back bone to remove each breast in one piece (the wishbone removed before cooking makes this task easier). Separate the thigh from the drumstick. Remove the big bone from each thigh. Place drumstick on a large serving plate. Slice both thighs into thick slices. Slice breasts straight down crossways against the grain, which means everyone gets a slice of skin, and place each side of the thigh and drumstick meat. Blast the entire plate in a pre-heated oven at 180 degrees for 2 minutes. Serve.

Add sugar to a saucepan and heat gently. Sugar will slowly caramelise. Add star anise, cinnamon and cloves, orange zest and juice and port. Reduce slowly until syrupy. Add cranberries and simmer for a further 2-3 minutes until cranberries are soft and popping. Remove spices. Pour contents of the pot into a jar and allow it to cool where it will thicken up. Then put a cap on the jar and refrigerate.

Melt the butter over a medium heat. Add the onion, celery and sauté for 2 minutes. Add the sage. Put the sausage meat into a mixing bowl. Add breadcrumbs, apricots, orange juice and zest, egg and chicken stock. Add the onion mixture and mix. Season with salt and pepper. Place in an oven-proof dish and bake in a preheated oven at 180 degrees for 30 minutes.

Derry Clarke’s decadent festive desserts are all about temptation

The ingredient series: meet the makers

The ingredient series: ‘We can grow almost anything here’