Prepare this traditional, simple yet impressive fish dish ahead of time to wow your guests and give you a starter to remember this festive season 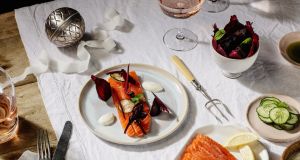 Christmas is a time for comfort and familiarity, and this year classic dishes will make a reappearance on our festive yuletide tables.

That’s according to Derry Clarke, who is the owner of the Michelin-starred L'Ecrivain in Dublin, alongside wife Sallyanne.

Clarke is a chef who has put traditional turkey and glazed ham, chestnut stuffing, cured salmon and flaming plum pudding centre stage on his Christmas day menu, and is sharing some of his more traditional recipes with us for the season.

“This year we wanted to go fully traditional because with the year that we’ve all had, I think we all want that comfort. We’ll have a couple of family members around, but it’ll be a smaller crew than usual this year,” he explains, echoing how many of us will be celebrating.

Derry and Sallyanne will host a small but intimate family gathering this year. Like lots of us, the couple have had to put grand plans on hold in 2020. They had intended to close culinary behemoth L’Ecrivain and open a more casual dining experience in the form of Eliza’s in Temple Bar.

With that on hold till next year the couple is looking forward to reopening L’Ecrivain for the holiday season and spending some time with family and friends as restrictions ease slightly.

“I do the cooking on Christmas day, while Sallyanne does a great job on the table settings,” Derry says.

He plans on putting on a good show this year, with very little unconventional cooking making its way to the table.

“I will be doing turkey and ham with all the trimmings. It’s such a huge meal, probably the most calories you’ll eat all year. For that reason I think it’s a good idea to do a cold starter, something simple like cured salmon. Everybody loves it and it’s something you can prepare in advance,” he says – important when there is so much else for the cook do tackle on the day.

“You want to keep the cooking in the kitchen on the day to an absolute minimum,” he agrees.

“If you really want to take ownership of the fish starter, you can cure it yourself. It’s completely fool-proof. It’s just half salt, half sugar and dill, then you leave it overnight in the fridge. We get our smoked salmon from Clare Island which is a really nice organic salmon. Farmed fish are mostly kept in pens, but organic has an estuary that is blocked off so they have room to swim, so I would look for that in the supermarket,” he advises.

“If you are lucky enough to be given a wild salmon in summer, you can freeze it and take it out for Christmas,” he says.

If salmon doesn’t appeal - even though it’s synonymous with Christmas ­­– sea trout or turbot will work just as well.

“When it comes to the presentation, keep it simple. Use a sweet dressing like honey and mustard, or some yoghurt, crème fraiche or horseradish. You could serve with some brown bread but avoid too much of it,” he warns. “The first thing people do when they sit down is load up on bread because they’re hungry - but the main course is going to be huge.”

“The Neff oven is great for baking bread because it has a combination of roast and steam, so you could make some the day before,” he says.

The most important thing to remember is to relax, have fun and enjoy being with the people you love

For those who prefer a hot starter, Derry recommends soup. It can be prepared in advance and is still quite light. “I wouldn’t dream of doing something unusual like rabbit or pigeon. It has to be something that suits the majority of people,” he says.

Derry and Sallyanne will greet guests with a pink prosecco that is a good match for the cured salmon he’ll make. “Or we will give a glass of South African Chenin Blanc which also goes well with the fish, but is delicious as you move on to the turkey,” he says.

“The most important thing to remember is to relax, have fun and enjoy being with the people you love. For that reason do as much prep the day or two before so you can chill out a little on the day,” he says.

Put a large sheet of cling film on a tray – enough to wrap the salmon. Place salmon on tray and cover evenly with salt, sugar, lemon zest and dill. Wrap firmly and place in the fridge overnight.

Next day remove from fridge. Wash off all the ingredients and pat the salmon dry. Cut into 2cm thick slices – straight down.

Place two pieces per person on a plate. Add 2 pieces of cooked beetroot, 3 to 4 slices of cucumber and 2 or 3 slices of raw baby beetroot and beetroot leaves on each plate.

Lightly crush walnuts and sprinkle over. Drizzle with some natural yoghurt and dill oil. Serve.

Derry Clarke’s decadent festive desserts are all about temptation

The ingredient series: meet the makers

The ingredient series: ‘We can grow almost anything here’