Microsoft calls on Irish organisations to avail of AI opportunity

Irish companies risk falling behind when it comes to realising the benefits of adopting artificial intelligence (AI). This is among the key results of a survey of European and Irish businesses carried out by EY on behalf of Microsoft 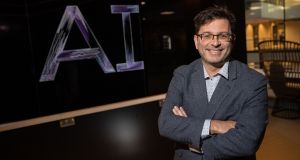 “Irish companies are lagging behind their European counterparts,” says Kieran McCorry, national technology officer with Microsoft Ireland. “They must grasp the opportunities presented by AI.”

In this context, it is important to understand just what AI is, McCorry adds. “From Microsoft’s perspective it is the ability of machines to understand something of the world around them. That might be a data stream, video, text or images. It can learn from them, look for patterns and behaviours and then reason on that basis. It can then provide assistance to other systems.”

It complements how humans work. McCorry points to an example of the use of AI in the Irish healthcare sector where “chatbots” monitor data on patient movements through hospitals and assist clinicians with patient management decisions. “Clinicians can ask questions in natural language and get the answers they need to improve the patient experience,” he says.

[Read more about Microsoft’s research into AI in Ireland]

For businesses, he says there is a great opportunity for Irish firms to make employees more connected, improve customer engagement, optimise systems, and improve efficiency.

“It is equally applicable on the streets as it is in a hospital setting,” he adds. “We are at an inflexion point where this technology can be truly transformative. This is due to the confluence of much more data from the massive increase in the number of connected devices; enhanced computing capability in the cloud; and improved algorithms and advances in machine learning and neural networks. If the data from cameras and vehicles on a city’s streets is collected, it can be used not just to manage traffic lights but to predict traffic flows and come up with insights that are truly transformative for the way transport works.”

AI is already having an impact on electricity distribution networks. “The systems are having to deal with significantly different demands due to changing consumer patterns, different power sources, the use of electric vehicles, and consumer generation,” he explains. “The networks were never designed to deal with these things, and we are working with electricity suppliers to develop AI based solutions which can optimise the systems without the need for major infrastructural investments.”

But there are challenges as well as opportunities. “AI will bring enormous change, which people may fear,” says McCorry. “There is also a belief that it will cause massive job losses. Artificial Intelligence is a transformative technology in the same way as electricity was. The challenge is for us to understand how it can be deployed in a way which creates more jobs than it displaces, just as previous technological revolutions did.”

He believes part of the reason for the gap between the vision and the reality for Irish AI adoption lies in a lack of guidance from the technology industry and others. “I believe the industry can do a better job of engaging with business to promote a greater understanding of AI. Regulatory bodies and the government should put AI front and centre of the agenda while the academic world needs to identify and communicate the emerging opportunities. We need a national dialogue in relation to how the country can best use AI for both business and citizens.”

Ireland is already falling behind in this respect, he fears. “In France, President Macron announced a €1.5 billion state investment in AI earlier this year while the US and China are also spending huge sums on it.”

It is by no means too late, however. “Ireland is well positioned to grasp the opportunities. We are the beneficiary of the large numbers of FDI companies which have chosen to locate here and we have a very highly skilled talent base. But we need to combine those with proper guidance and a formal structure. At Microsoft we are already playing our role by providing a wide range of AI services and tools on our Azure cloud platform for companies to experiment with. We are also committed to playing our full part in upskilling and educating people to give them the capabilities required to make the best use of AI.”

He concludes on a note of caution regarding the ethical dimension of AI implementation. “While I believe AI will be transformative it needs to be adopted and implemented in a thoughtful manner. Clear principles have to be set out on how it should be used and they should be based on fairness, accountability, transparency, and inclusivity. It is vitally important that any usage of AI respects the privacy and safety of individuals. At Microsoft Ireland we will help others build systems that are reliable and safe and respect these principles.”

Read more about Microsoft’s research into AI in Ireland.