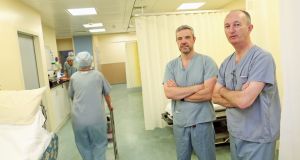 A total of €2 million was invested in the da Vinci robot at the Mater Private Hospital seven years ago and close to 2,000 surgeries, the highest number in Ireland, have been carried out at the hospital with the help of this robotic assistant ever since.

The da Vinci is a robotic surgical system that assists the surgeon in performing operations with less invasiveness to the patient.

Consultant gynaecologist at the Mater Private, Bill Boyd specialises in gynae-oncology and he started using the machine to perform hysterectomies four years ago.

These operations have always been classified as major surgery with a long recovery time and a five-night hospital stay. There can also be significant blood loss and scarring but robotic-assisted hysterectomy surgeries are minimally invasive, which results in less scarring, a shorter stay in hospital (48 hours is typical), less blood loss and low levels of post-operative pain.

There has been a dramatic drop in hysterectomies in Ireland in the last 20 years; at one stage they were at 20 per cent or one in five women would have had a hysterectomy. They are now at 5 per cent. Boyd says this is due largely to the increased use of the Mirena coil, making one of the major reasons for hysterectomy – heavy periods – a thing of the past. Therefore, most hysterectomies that are performed nowadays are not straightforward, are difficult to carry out, and this is where the robot comes into its own, according to Boyd.

He explains how the three arms of the robot mimic his movements exactly, allowing much more precision. He says the intricacy of the surgery is “incredible”.

“With a radical hysterectomy for a cancerous disease but also for non-cancerous things like endometriosis, which is a common condition, there is a lot of dense scarring or fibroids around the uterus and those operations can be difficult. You can do extremely delicate and difficult dissection with the robot and the beauty of it is that people with a high body-mass index can be operated on too.”

Another huge plus to the robotic assistant is that it counteracts fatigue, allowing the surgeon carry out a five-hour operation without becoming tired.

“I’m sitting at a consul with my arms in a device and when I move my wrist the sensors on the computer tell the wristed instruments of the robot to mimic my movements exactly, so you can do very delicate and difficult surgeries for long periods and you don’t get tired,” Boyd says.

He says that in standard gynae laparoscopy surgery two assistants are generally needed, which can lead to distractions in theatre. With the robot the surgeon controls the camera, the focus and the movement of the camera. “You don’t get distracted by somebody walking into the room or asking questions like you do during a standard stick laparoscopy, and you have absolute control of the surroundings. The robot is the assistant, effectively,” he says.

“There is a much quicker recovery time and we would encourage our patients to go home after 48 hours.” He also says they have had no readmissions in the last four years and for this reason patients appreciate the surgery.

Conor Shields, a colorectal surgeon at Mater Private, says the robotic platform is relatively new in the area of colorectal surgery, compared to its use in prostate operations.

“Rectal surgery is a major operation and what we find with the robotic approach is that the physical impact on the patient is less so they recover faster, feel better sooner, spend less time in hospital, and they need less medication,” he says.

There are two aspects of the robotic-assisted surgery that are better than standard keyhole surgery, he says.

“The instruments are much more versatile, they are wristed, so you can move the tips of them like your fingers. With standard keyhole surgery, it is like operating with chopsticks but with the robot it’s like using your fingers. The second thing is that the view is much better – it’s a 3D view. It’s immersive and so you’re seeing things a lot better, a lot closer, with a lot more precision.”

In terms of better outcomes in rectal surgery, he says, robotic-assisted surgery has the same effectiveness in treating the cancer as laparoscopy, which is the gold standard for this type of cancer.

“One of the big advantages of the robot is that it will let people have minimally invasive surgery when they wouldn’t have been able to, perhaps due to their size, the size of their pelvis or because previous operations meant they couldn’t have laparoscopy. That would previously have meant traditional open surgery which would have set the patient back.”

As in the hysterectomy surgery, hospital stays are shorter, bowel function returns faster and there is less pain afterwards.

Shields said he approached robotic-assisted surgery as a sceptic but is now a “convert”.

“I find patients are a bit bemused as it’s not necessarily on their radar and you have to explain that the robot is not doing the surgery, the surgeon still does the surgery.”

In terms of the prostatectomies carried out, the improved outcome for patients includes better quality of life post-op such as less incontinence and less erectile dysfunction, which are common issues after open prostatectomy surgeries.

Patients are increasingly opting for robotics, according to the doctors, but they agree it’s not necessarily on the radar of a lot of GPs, or the general public, just yet.

It’s currently available in the Mater Private and Boyd says they would like to see a robotic platform in the Mater Public so that – eventually – everyone has access to this.