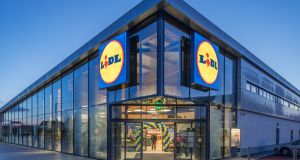 Stephen Hasson, Lidl regional logistics manager: “We are exceptionally efficient at what we do.” Photograph: Getty Images

Since first entering the Irish market 20 years ago, Lidl has continued to go from strength to strength. This is due in no small part to its thousands of loyal and dedicated employees, many of whom have been with the supermarket giant for several years.

We spoke to two of their valued staff members about why they are proud to build their careers with Lidl.

“We are becoming a hugely diverse organisation”

Tara O’Connor is sales operations executive for the Munster region and has been with Lidl for over 13 years. Having completed her master’s degree in University College Dublin, she was on the hunt for practical managerial experience and eager for a role that would offer more responsibility. Having spotted an advertisement for sales operation manager with Lidl, it was evident this wouldn’t be a problem.

“The word responsibility jumped off the page,” she recalls. “That stayed with me, that they were offering full responsibility for four or five stores straight away.”

O’Connor was, of course, successful in her interview and says she immediately felt at home. Then three years after she joined Lidl, she was offered the opportunity to spend some time in Germany, gaining experience in a wide array of different departments at the international head office, a time she calls “a privilege”.

“I spent almost nine months in Germany, and spent time in Austria and Poland too. It helped me understand the vastness of Lidl, the size and scale of the organisation,” she says, adding that Lidl also provided the opportunity to learn German as part of her placement. O’Connor returned to Ireland, where she was quickly promoted, taking up the position of head of cost management for Lidl Ireland.

We are so progressive and open in terms of our team

“I spent two years in that role and was responsible for setting up the cost management function in Lidl Ireland. In 2012 I took the position as HR and administration executive back in Retail Operations. My love for retail operations continued to grow and I moved into my current position in 2016. I am responsible for store operations in Munster; that ranges from developing our sales, to personnel planning, stock management and ultimately ensuring a great customer experience,” she explains.

Variety is the spice of life, and O’Connor admits that in the supermarket trade, every day is different. “Retail is so vast, and nothing is ever the same. It’s a huge cliché but while that is true of Lidl, however, it’s still in a very structured and organised way,” she notes.

Yet Lidl’s openness to change is a cornerstone of the company’s success, she believes.

“Embracing innovation is key. This is a dramatically different company to the one I started with,” she says. “We are so progressive and open in terms of our team, and we are becoming a hugely diverse organisation.”

The coronavirus pandemic has made everything “a bit less predictable”, O’Connor admits. “You think you know your stuff and can forecast what’s coming but it might be an extreme weather event or now a pandemic. It’s so dynamic.”

The “extreme weather event” O’Connor mentions did happen, when the Bandon store was flooded over a decade ago.

“Practically everyone who worked in Lidl across Munster was called to Bandon to work on getting the store reopened,” she recalls. “We succeeded and got it open the following afternoon after working all night. It was all the more impressive when we saw other businesses in the same area closed for up to a week and even longer.

“The teamwork involved was phenomenal. That was the moment for me that I realised I was so proud to be part of a team and an organisation that reacts like that.”

“People are paramount to our success”

Stephen Hasson is regional logistics manager based at the Mullingar distribution centre. Hasson came to work for the organisation almost five years ago following the completion of his master’s degree at Smurfit Business School.

“It was my first real job in the real world. I knew that sitting behind a desk or sitting in a cubicle had never really appealed to me and I looked at companies that offered responsibility at an early stage in your career. Lidl was an obvious choice,” he says. He began working as a selections supervisor, an operationally-based role that involved managing a team of warehouse operatives. Receiving orders on a daily basis from the wider store network, they are responsible for ensuring produce gets sent to where it is needed in a timely fashion.

It was immediately obvious that he’d made the right call, he admits. “It was definitely plenty of responsibility, definitely challenging and it was 100 per cent the right role for me and my personality.”

That said, it was a steep learning curve. Hasson admits that the complex language of logistics and supply chain management was a new one for him. “My first few days and weeks were spent just getting to grips with the sheer scale of the operation but I got a huge amount of support from my fellow colleagues and my first few months were spent working alongside a mentor or a ‘buddy’ to get me up to speed.”

In his current role as the regional logistics manager, he is now the one offering support to newer staff members. “My role now helps me to do that more than ever. In Lidl you always have the opportunity to grow. It’s a company that prides itself on seeing you progress, it’s a business that people can grow both personally and professionally in.”

And his role means Hasson is perfectly placed to understand why Lidl has continued to build on its success year on year.

This efficiency allows Lidl to offer cost savings to the customer when they reach the register, he adds.

“I truly believe no one is as efficient as we are in the industry and that translates to the ongoing success of the business.”

This efficiency was put to the test at the onset of the pandemic but Hasson says that his proudest moments working for Lidl have come in the past eight months.

“When the pandemic really started to take hold, there was a lot of uncertainty and that extended to our team members,” he says. “You might have expected a high level of absenteeism just because of people feeling unsure and uncertain, it was when we actually had our least, every member of the team stood up, to ensure availability for customers. We have phenomenal teams of people in all areas of the business and these people are paramount to our success.”

To be part of a secure, essential business that provides a valuable customer-first service to your friends, family and neighbours, check out jobs.lidl.ie for more information on job opportunities in Lidl.