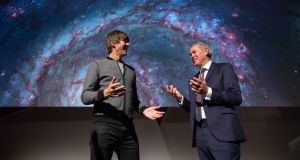 Physicist Brian Cox on stage with EirGrid chief Mark Foley at the launch of the company’s €2 billion grid transformation strategy at the Convention Centre Dublin.

The reality of climate change is well understood, and beyond scientific doubt. The only question now is how fast society can respond to limit the damage, and so protect our planet for current and future generations. The Government’s response is to plan for the transition to a sustainable, low-carbon future as set out in the Climate Action Plan, published earlier this year.

In September, EirGrid unveiled its response to the plan, with the launch of a new five-year strategy which will see it invest €2 billion in helping to decarbonise Ireland’s electricity system.

“We have a major role to play in making the Climate Action Plan happen,” says EirGrid chief executive Mark Foley. “We are not the only actor involved, of course. There are plenty of others out there, but we are at the epicentre of it. We are putting all the pieces of the jigsaw together when it comes to electricity.”

Electricity from renewable sources will play a vital role in the global response to the climate crisis. Heating and transport are switching from carbon-based fuels to electricity, which will increase demand for power. EirGrid forecasts that the demand for electricity in Ireland will increase by 23 per cent by 2025.

The expectation is that the electricity system will carry more power, and most of it will be generated from renewable sources. But this kind of once-in- a-generation change cannot happen unless the power system is transformed.

It has to be made ready to perform reliably, even with close to 100 per cent renewable energy.

“The system we depend on for a reliable and secure supply of power was originally based on traditional methods of generating electricity,” Foley says. “These methods relied on burning fossil fuels and have been used successfully for over 100 years.”

EirGrid currently operates the grid with about one third of generation coming from renewable sources. The action plan states that this must more than double by the year 2030.

This requires EirGrid to operate the system in a more dynamic and responsive way. In turn, this will require improvements to infrastructure to make the grid stronger and more flexible.

“We aim to achieve this by using innovative solutions as well as proven technologies. Our goal will be to achieve the required increase in renewables while minimising the addition of new infrastructure. And, as always, we will pursue these changes without impacting on the reliability of the electricity system,” says Foley.

Much of the investment will go into new technologies to strengthen the network to make it as reliable and secure as it is today, despite the massive increase in renewable generation. “The power network is very stable at present and the challenge is to make sure it remains so,” Foley adds.

System interconnection – such as the proposed new North South, Celtic and Greenlink interconnectors – is a key part of the strategy.

Last month, EirGrid’s Celtic Interconnector, a high-voltage electricity cable linking Ireland and France, received a major boost with the announcement from the European Commission that it would provide €530 million of funding for the project.

Eirgrid estimates it will cost in the order of €1 billion to build the interconnector, which will provide Ireland’s first direct electricity link to continental Europe. It will be able to import and export up to 700 megawatts of electricity, enough to power 450,000 homes, and will go live in 2026.

Foley points out that interconnectors make the power system more resilient and efficient by connecting to neighbouring grids. This added strength will become increasingly important as renewable generation grows. EirGrid cannot deliver its strategy on its own, he acknowledges.

“We recognise the need for a major collaborative programme with partners to deal with the changes caused by the switch to electric vehicles and electric heating in the home. We partner with the operators of neighbouring transmission systems using interconnectors. We have partnerships with customers that generate or use large amounts of power. We have a responsibility to the consumers who depend on us for a constant, reliable supply of electricity. We are guided by Government and regulators, and work in partnership with them to deliver policy.”

The development of new grid infrastructure also requires partnership with land-owners and communities.

“Advances in technology are increasingly helping us to find less intrusive ways to move large amounts of power, but all electricity grids, in any country, depend on a backbone of large-scale infrastructure,” Foley says. “This means we still rely on pylons, substations and overhead wires. Asking land-owners and local communities to accept new infrastructure has never been an easy task. We never take these decisions lightly, or without first investigating all alternative solutions. But where new infrastructure is essential, we need to inform and persuade the people and communities affected.

“We have to ensure that people and communities understand the connection between what we are doing and the Climate Action Plan. Everyone involved in the development of electricity infrastructure needs to reflect deeply on the way it has been done in and get the engagement piece right for the future.”