The flu vaccine: what it is and why you should consider it

Flu season is upon us: here is a short guide to help you understand the flu vaccine and how it can protect you and your family 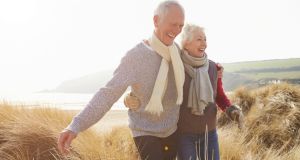 Everyone should consider getting the flu virus, but there is a specific group of people that should prioritise it, says the HSE

It’s nearly that time of year when outbreaks of flu are at their highest. Influenza occurs almost every year, mostly in winter and affects people of all ages. The highly infectious respiratory illness caused by the flu virus can cause symptoms that range from mild to very severe, sometimes requiring hospitalisation.

However, the good news is that it can be prevented by getting the flu vaccine - a safe and effective way to stave off the virus, which starts working within two weeks of receiving it.

Everyone should consider getting the flu vaccine but there is a specific group of people that should prioritise it, according to the HSE.

These include people over 65 years, pregnant women and anyone with a chronic medical condition, including chronic heart disease, chronic respiratory disease, diabetes mellitus and immunosupression due to disease or treatment.

Vaccination is also strongly recommended for healthcare workers and residents of nursing homes.

It is maintained that this is due to the fact that pregnant women are more likely to become very ill from flu due to changes in their heart and lung function and are more likely to need admission to hospital and even to the Intensive Care Unit. Getting flu in pregnancy may also lead to premature birth and smaller birth weight and other serious complications during pregnancy.

In addition, infants under six months of age have the highest rate of hospitalisation and death from influenza, according to the HSE. The vaccine in pregnancy helps protect the baby up to six months after it’s born.

Any fears that the flu vaccine actually causes the flu are unfounded. The vaccine contains killed or inactivated viruses and therefore cannot cause flu and any reactions to the vaccine are generally mild.

How serious is the flu and how can people differentiate between it and the common cold?

A cold is a much less severe illness than flu. Flu symptoms come on suddenly with fever and muscle aches, while a cold usually starts gradually with symptoms of a sore throat and a blocked or runny nose.

Healthy people normally recover from flu within seven days, while some recover more quickly. People who are at risk of complications will usually feel better after about 10 days.

However, flu can be severe and can cause serious illness and even death, in vulnerable people. Serious respiratory complications can develop, including pneumonia and bronchitis, to which older people and those with certain chronic medical conditions are particularly susceptible. Pregnant women have also been found to be at increased risk of the complications of flu. Some people may need hospital treatment and between 200 and 500 people, mainly older people, die from influenza-related conditions each winter.

If you do get sick from flu, or are looking after someone who has the flu, there are many things you can do to treat it at home. If symptoms are mild then bed rest should suffice and most people will recover within a week without medical treatment. However, those in the high risk bracket should seek medical advice.

What to do when looking after yourself or someone else with flu:

Signs to look out for include shortness of breath at rest, or while doing very little; painful or difficult breathing; coughing up bloody sputum; drowsiness, disorientation or confusion; fever for four to five days and not starting to get better (or getting worse); starting to feel better then developing a high fever and feeling unwell again and chest pain or turning blue.

With a child, contact the doctor if they have fast breathing or trouble breathing; bluish skin colour; are not drinking enough fluids; are not waking up or not interacting, being so irritable that the child does not want to be held; flu-like symptoms that improve but then return with fever and a worse cough, or fever with a rash.

Where can I get the flu vaccine?

For more on the flu vaccine see www.hse.ie/flu