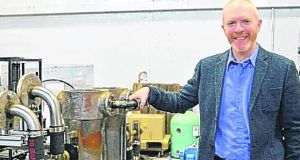 It has long been a dream of inventors to come up with an engine that runs on cheap renewable energy.

Well, Dublin-based Exergyn has developed an engine that runs on hot water. Technically, it runs on wasted water of about 90°C (the temperature of a cup of tea), which is known as low-grade waste heat (LGWH)

And there’s a lot of hot water wasted in the world. The amount of energy lost annually in the form of wasted hot water is equivalent to twice Saudi Arabia’s annual output of energy – oil and gas.

Which is why Exergyn’s potential market is conservatively put at €450 billion. And why the company’s initial product could reduce global carbon emissions by 2 per cent annually if fully deployed.

“People were sceptical of our claims at first,” says Alan Healy, chief executive of Exergyn. “But thankfully that has changed . . . Our latest prototype is producing 4kW in early tests. And last year we received independent verification that an earlier prototype trialling at a landfill site was producing grid-quality electricity.”

Companies have been trying to crack the LGWH problem for decades, but although some technologies have been touted, nothing has emerged that is attractive to customers, with so-called solutions being too expensive and complex.

“We are aiming to be the first truly commercial solution to LGWH,” says Healy. “We’ll offer customers a three to four year payback – encouraging them to buy our product because it is financially attractive for them to do so, not because it happens to have zero carbon emissions.”

The company’s product, the Exergyn Drive, will be a modular 10kW unit at first, with larger sizes to follow.

“It’s a solid-state reciprocating engine,” explains Healy. “It utilises an alloy called nitinol, which contracts forcefully when heated. Exergyn has a number of nitinol experts on its team and is also working with other experts around the world.”

The company will initially target renewable energy processes that use biogas, and syngas (a by-product of gasifying carbon and non-carbon fuels such as biomass).

Such processes employ industrial engines that produce many litres of hot water per second, in much the same way that a car engine produces hot water in the radiator. Exergyn could increase the output of such an industrial engine from, say, 42 per cent to 44-46 per cent. Other potential markets include marine applications and geothermal.

To date Exergyn has raised more than €3 million in equity and won a Horizon 2020 grant worth €2.48million.

“The Horizon2020 grant has been yet another validation,” says Healy. “It enabled us to hire five additional people and now we are accelerating towards commercialisation. We have major companies signed up for trials of our next generation prototype in early 2017; we have investors and corporates wanting to invest in us and work with us; and we expect to be shipping significant quantities of our product in the second half of 2018.”

By the time the company is in full production of its 10kW units, it expects to be employing hundreds directly, and to create thousands of indirect jobs across Europe in the form of suppliers, distributors and other services.

Prepare to succeed by looking to the horizon

Meet some companies funded by Horizon 2020

Proposing solutions to the problems of modern living

Irish households to get switched on to future of renewable energy