Hang Dai: a taste of Asia

Chinese food specialists Hang Dai bring their latest street food venture to The Hop House, a three-part food, art and music event next set to take up its final residence at Whelan’s, Dublin 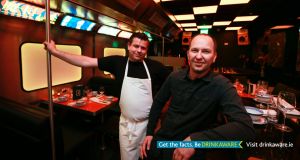 Will Dempsey with co-owner Karl Whelan. Food at music events has come a long way from the greasy chipper vans of yore.

Hang Dai is not your local Chinese takeaway, and that’s not just because there isn’t a chicken ball in sight. Big fans of Asian food, co-owners Will Dempsey and Karl Whelan often explored the Chinese restaurants on Parnell Street, as well as sampling Chinese food when travelling abroad. They were looking for something different.

“We always found that real Chinese food was so much better, Irish people have been eating what we know as Chinese food for years, but the road it went down in the 1980s and 1990s has been a fast food one – it’s good for when you are hungover,” Dempsey says.

Famed for its roast duck and dumplings, Hang Dai offers the most traditional types of Chinese food, although some have been given a contemporary twist. Dempsey admits this sometimes comes as a surprise to their customers.

“We do a Kung Po chicken, and while that’s something you can get here, when we had it in China we thought it was unbelievable and nothing like the fruity tangy sauce you get at home. So ours is actually full of chillies – we have to warn customers – but the Chinese eat chillies like they are vegetables. Lots of people come back for it because they love it so much.”

Dempsey laughs as he recalls an email he received from a disgruntled customer who complained that, because there was no sign of takeaway stalwart chicken curry on the menu, the restaurant wasn’t serving traditional Chinese food.

“I had to tell him I have Chinese chefs in the kitchen here and not one of them has ever eaten what we call chicken curry in China, it’s not a thing.”

They’re now branching out by testing their street food offering, and the first stop on that journey is at The Hop House, a series of events where DJs, street artists and local food vendors come together to provide a truly interactive experience across Dublin venues this April and May.

Dempsey explains the events are a great way to bring their food to a new audience. “We do takeaway on Deliveroo which is really popular and we have lots of repeat customers. We have been asked to do corporate events, or anything from house parties to the afters at weddings. We were more focused initially on getting things right in-house, but now we are looking outside at what we can offer.”

Food at music events has come a long way from the greasy chipper vans of yore, and The Hop House is no different. Will explains that they wanted to provide partygoers with something a little bit left-field.

“Hop House 13 got in touch and they wanted to create something different and full of flavour – usually people want you to provide something like a spice bag but we thought we would try something a bit fancier, so instead of having one meal in a box we would have two.”

Their popular Super Noodles are on offer, with prawns, pork, duck and vegetables in a wild garlic sauce, with a portion of crispy squid sitting on top. “It’s like having a starter and main course in one,” says Dempsey.

In many ways, Hang Dai and The Hop House was a natural pairing; Hang Dai already marries music and mealtime, with their in-house DJs spinning tracks on their customised sound system as diners tuck in and continue to play long into the night after the plates have been cleared away. They’ve also opened a new cocktail and small plates bar – The Gold Bar – upstairs.

“It’s a complete night out under one roof. We are doing something fresh – restaurants are now opening up in Dublin practically every day and you have to have something that marks you out,” says Dempsey.

With talk of the restaurant’s involvement in some of Dublin’s boutique summer festivals, the guys at Hang Dai are using The Hop House as a way of perfecting their street food offering, while having a really good time.

On Friday May 11th you ’ll find them in the Parlour at Whelan’s of Wexford Street for the final instalment of The Hop House. That event will feature music by Ships, Sorca McGrath and Simon Cullen’s band which recently won the RTÉ Choice Music Prize for its album Precession, as well as DJ collective Telephones, sign painting by Signs of Power and more.

“We are really enjoying it so far. It’s great getting out and meeting lots of people and the atmosphere is terrific. It’s put together so well by Hop House 13 – it’s just a lot of fun,” says Dempsey.

The Hop House has popped up in some of Dublin’s most charismatic and vibrant venues, following the recent launch event in the Bernard Shaw on Richmond Street.

It followed that by taking over Wigwam and next it will be transported to Whelan’s of Wexford Street on Friday, May 11th.

Tickets available from thehophouse.eventbrite.ie and include:

Brewed with 100 per cent Irish barley, Hop House 13 is a crisp and full-flavoured lager with subtle malty notes and fresh hop aromas with hints of apricot and peach. It has a versatile taste and character and so pairs well with a wide selection of street food styles, as guests will experience at The Hop House.

Uber cool and contemporary Chinese eatery, Hang Dai, has created an update of the classic Super Noodles dish especially for The Hop House event series. Hang Dai’s Super Noodles include crispy squid, in a deliciously light batter, with a wild garlic sauce. The mosaic hop in Hop House 13 with its citrus and sweet aroma works well with Asian spices, especially the ginger to enhance the flavour of the spicey noodles. The subtle sweetness of the beer will bring out the natural sweet flavours of the squid without overpowering the delicate fish.