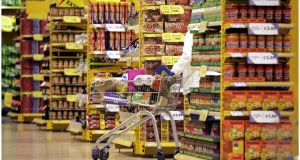 Heading to the supermarket without a shopping list leads to food waste, so be sure to always plan your shops in advance. Photograph: Dara Mac Dónaill

We’ve all heard that you’re not supposed to go grocery shopping while you’re hungry because we’re all too weak to resist unhealthy treats on an empty stomach. However, there are multiple other pitfalls you can fall into as you rush around the supermarket, and they’re thwarting your attempts to eat a little healthier.

Chief among them is heading out without a shopping list, according to Orla Walsh, dietitian with the Dublin Nutrition Centre.

“This leads to food waste as you’ve bought loads of random or surplus items, and no idea as to what to cook when you get home. If you have a clear list, you come out of the supermarket with your breakfast, lunch and dinner for the next few days. It sounds so simple but you’d be surprised how few people do this,” she says.

According to the Environmental Protection Agency, the average Irish household wastes €700 every year on food that goes uneaten. The meal planning point is one Janis Morrissey, dietitian for the Irish Heart Foundation, echoes.

“There are lots of apps that can help with meal plans and shopping lists. Take advantage of weekly offers if you can by making larger quantities of meals and freezing what’s left over,” she says.

There’s no ideal amount of grocery shops to do – whether you go once a week or every day is up to your individual lifestyle. However, Morrissey advises doing a “big shop” for bulky items and things with a long shelf life, and top it up as you go with perishables like fruit, veg, bread and milk.

The layout of supermarkets is no accident either, according to Morrissey. “The sights, sounds and smells all combine to tempt us to buy foods we may not want or need. A good rule of thumb is to focus most of your shopping on the edge of the store as this tends to be where most fresh food is located with more processed foods in the central aisles.”

“The healthiest foods are more often the foods of one ingredient that don’t come in a wrapper, which are usually found in the perimeter of the supermarket. They are called wholefoods, in other words foods that used to swim, walk, crawl or grow. For example, the healthier carbohydrates are the ones that grew out of the ground looking similar to how they appear on your plate such as potato, brown rice, pumpkin, squash and quinoa,” says Walsh.

While Morrissey recognises that the inconsistency of how food labels present nutritional information is confusing, she says a lot of information can be gleaned from the summary of information on the front of a lot of products.

Walsh says the healthiest foods won’t even have a label, like fruit and vegetable. However, in general, she advises: “If it’s a carbohydrate you’re looking for it to have less than 5g of sugar per 100g and greater than 6g of fibre. If it’s a protein source, you’re looking for the leaner varieties of meat. High fat is more than 17.5g of fat per 100g while low fat is 3g of fat or less per 100g, or 1.5g of fat per 100ml for liquids.”

While in general healthy eating and making healthy choices comes down to the consumer, Morrissey says some moves are being made by supermarkets to help you along the way.

“Some supermarkets have removed confectionery from some till areas and this is a welcome support to parents to help minimise pester power. We believe this initiative should be extended so that all checkouts are “sweet-free”.

There is much more that could be done, such as, not placing products aimed at children (for example with cartoon characters) at their eye level; using shelf space, shelf position, and end of aisle displays to promote healthy items; and using promotional strategies such as vouchers, contests, and buy-one-get-one-free offers on healthier products,” she says.

Easy swaps to make at the supermarket:

With more than three times the fibre, brown rice will keep you fuller for longer, help keep your blood sugar levels more stable and help keep your digestive system healthy.

There isn’t much difference between white and wholemeal bread, only about 0.5g fibre. To choose a healthier bread opt for a brown higher fibre (>6g/100g) seeded loaf.

There’s about 25g of free sugar in a glass (250ml) of fruit juice. That’s over 6 teaspoons of sugar. Get a glass, fill it with 6 tsp of sugar and try to drink it. If you can drink it down straight, you’re allowed to continue to have fruit juice.

Granola for oats or unsweetened muesli

It’s not uncommon for granolas to be 20 per cent sugar. Just check the “of which sugars” per 100g yourself. If you were to get rice, fry it in butter and add sugar, would it be healthy? Of course not. So why do people struggle to see that granola is not the healthiest choice?

It’s important to get healthy fats into the diet. By using these healthy fats as spreads, dips or tasty additions to your meal, it’s easier to meet your targets for them.

People who eat nuts daily tend to live longer. Biscuits don’t have the same benefit. Sometimes a simple switch can make a huge difference, and this is certainly one of them.

Cream has 38 per cent fat while crème fraîche is 22 per cent fat – a simple change but can make a small positive difference.

Rashers and sausages for eggs and beans

Eating less processed meat is a better choice all round. Eggs are nutritional powerhouses while beans are a great source of soluble fibre.

As part of the Pfizer Healthy Town project, Aoife Valentine asked dietitians for suggestions on how to swap regular food items for more healthy options.