Black Friday: what is it and how to prepare for it

Electrical general manager with Harvey Norman, Tim Hannon talks us through Black Friday and provides hints on how to pick up a bargain 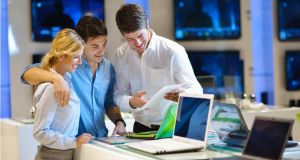 Tim Hannon, Electrical general manager with Harvey Norman: "If you’re chatting to a salesperson you’re going to want a little bit of time. If you’re buying a gift especially, you want to make sure it’s the right thing."

Anyone eager to pick up a bargain in the run up to Christmas will be familiar with Black Friday.
In the United States, Black Friday takes place just after Thanksgiving, and is traditionally known as the day people start their Christmas shopping in earnest. It has also been ranked as the busiest shopping day of the year for a number of years now.
So it was only a matter of time before it came to this side of the pond, with stories of mass hysteria hitting the headlines in the US.
Electrical general manager with Harvey Norman, Tim Hannon talks us through Black Friday and how best to prepare for it.
“What has happened is that it’s become a real sale event, so it’s great for customers, and it has become more and more competitive as the years have gone on,” he says.
“Amazon brought it to the UK a couple of years ago. Then a couple of other retailers came on board and then it came to Ireland two years ago. We’re expecting it to be really big this year,” he says.
Whilst it might be seen as a worldwide phenomenon, according to Hannon it's not, with only the US, the UK and Ireland getting in on the act so far.
“Black Friday is only a day usually, but at Harvey Norman we have spread it over a week. Last year it started on the Monday before Black Friday and I think that gave customers a chance to not have to deal with the madness,” he says.
This year, Harvey Norman launched their campaign on Friday, November 18, a full week before Black Friday.
So what is Harvey Norman offering this year?
“We’ve been working on Black Friday since this time last year. We have a team of people who are going to be checking all our competitors offers, both online or instore, and we’re going to be matching or beating everyone else’s prices,” says Hannon.
You can already avail of Black Friday offers on laptops (up to €400 off), TVs (up to 40 per cent off), drones (up to 50 per cent off), headphones (up to 40 per cent off) and lots more, by shopping online at  www.harveynorman.ie/sale or visiting your local store.
Harvey Norman are also offering a Click and Collect service, so customers can order products online, but pick them up from their nearest store.
“That order gets sent to the nearest store, and once the store has it they’ll send an email to the customer telling them to pick up the product. That can happen anywhere from five minutes to an hour, and the person can come in and pick up the product. And our offers online and instore are the same,” says Hannon.
Hannon gives us some hints on how best to navigate Black Friday in order to pick up the ultimate bargain.

“The difference between us and our competitors is we don’t want to just offer great value and deals, we want to make sure it’s the right product for you. At this time of year people can get a bit blinded by the deal, but if we spend a couple of minutes chatting to you we can find out what you really need. We spend a lot of time training our staff to understand customers' needs and that’s the difference between the instore bit and the online bit,” Hannon says.

There will be stock issues

“There’ll be a product that takes off that none of us would have thought is going to be as popular. So if there is something out there that you think you really want to get, try to come in as early as you can,” he says.

“We didn’t see any queueing last year because it was spread out over a longer period of time, it wasn’t just the Friday. Having said that the Friday was very busy and there are some additional offers on the day so it’s hard to know,” he says.

It might be better to come without the kids

“If you’re chatting to a salesperson you’re going to want a little bit of time. If you’re buying a gift especially, you want to make sure it’s the right thing. So it might be best to go it alone on the day. Having said that, we’re more than happy to have the kids there,” he says.

Hannon says electrical appliances and white goods are hugely popular and there are always great bargains to be found in those areas, but he says they will have products across every single category that are on sale including furniture, bedding, laptops and computers.
Harvey Norman's Black Friday sale is now on.
Visit your local Harvey Norman store, or shop online at www.harveynorman.ie/sale, to get up to €400 off laptops, up to 40 per cent off TVs, up to 50 per cent off drones, up to 40 per cent off headphones and lots more.