Meatopia: a mecca for meat (and beer)

Guinness is bringing the London food festival Meatopia to Ireland for the first time, to the Open Gate Brewery 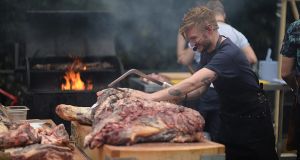 The Meatopia festival has been a mecca for meat lovers since its first incarnation in the Big Apple back in 2004 and its more recent arrival in London. Now heading to Dublin, the big meat event puts grilling or smoking ethically produced meats by a selection of top-end chefs at the heart of the festival.

The Dublin event runs July 1st and 2nd at the Guinness Open Gate Brewery, with a selection of beers – produced by Guinness and other local, international brewers – paired with each dish. The food and beer are the main events over the weekend, but also expect live music, pop-ups and butchery and fire management classes all day long.

“When Meatopia was in New York it was very meat focused, but since it’s come to London, and now Dublin, it’s focused on great produce, fire cooking, fun and a great day out,” says Davidson. “The main influence on the food now is the pedigree of the meat, how it’s cooked, and what it’s paired with. And everything is cooked over fire, because it really is the best way to cook.”

The meat at the Dublin event will be supplied by Maurice Kettyle, whose beef is on the menu at 800 restaurants across Ireland and Europe, including 28 Michelin-starred establishments.

“In Ireland we have the best beef in the world, in my opinion,” says Davidson. “Maurice Kettyle has some older Galloway cattle, about six- or seven-years-old, and we’re going to use two of them, the whole animals: one on each day. I’m very excited to try the meat which has been finished on fermented Guinness grain and aged for 45 days in Kettyle Irish Food salt chambers.”

“We’re applying the ethos of taking one whole animal, looking at the way the different parts are butchered, and then applying different chefs’ styles to the dishes. For example, I’m doing a dish involving Guinness sauce, dulse and samphire with slow-cooked rumps.”

Davidson grew up on a beef farm in Derry, leaving school to become a butcher with his uncle, before moving to London to work as a butcher with Jack O’Shea at Harrods ten years ago, and then training as a chef. He has since worked at a number of stand-out restaurants including St John Bread and Wine, Lockhart and the Michelin-starred In de Wulf restaurant in Belgium.

“I knew the team that took Meatopia from New York to London,” says Davidson. “Five years ago I started helping them in the background. This is the first year I’ve been directly involved in the festival up front.

"In the past, I also ran a pop-up restaurant called Beef Cartel, so I spent quite a lot of time researching that up in Scotland where I now have my own butchery called Torloisk Highland. It’s all highland beef and we’re exporting it to different places around the world. All of that has massively influenced what I’m doing with Meatopia.”

Davidson’s vision for the Dublin event is that it will be an intimate celebration of meat cooked over fire that will bring together the diverse styles and visions of top international hand-selected chefs.

“Cooking over a live wood fire is the best because you cook through intuition. You cook through touch. And you can’t really teach that overnight.” says Davidson. “Richard Turner is going to bring a very British and French vibe to the food.

“Selin Kiazim from Oklava will be doing offal and Turkish-inspired food. I’ll be bringing an Irish and Scottish influence. The way we’re curating the event is that you can try one of each dish from different chefs, rather than a tonne of one dish.

“The Guinness brewers have created some beers especially for the event, including a Dutch style bock lager, with a hint of smoke which sounds incredible! All in all it’s going to be an awesome few days.”

For tickets and information visit: guinnessopengate.com/meatopia

WHAT YOU NEED TO KNOW

Dublin will become the third city to host the Meatopia Festival, following in the hoofs of New York and London.

The concept behind the event is to serve the highest quality meat, free of hormones and antibiotics, prepared by the world’s leading chefs, over fire or smoke, alongside specially selected craft beers.

For tickets and information visit: guinnessopengate.com/meatopia