Guinness puts seafood on the menu 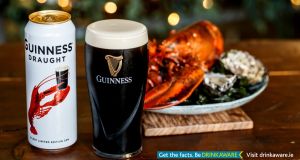 Guinness and food have enjoyed a long and flourishing relationship, with the association of lobster and Guinness stretching back to the early 1900s – the dry roasted, slightly bitter taste of Guinness stout said to be the perfect seafood pairing.

Now, just in time for Christmas, the people at Guinness have unveiled two collectable cans featuring two of Gilroy’s most imaginative designs, each with their own story: the smiling pint and the lobster.

The limited-edition cans are on sale now in supermarkets across the island in the run-up to Christmas and are already proving a hit with collectors and fans planning to pair them with Christmas dinner. The white cans look totally new but, inside, the Guinness Draught is exactly as you’ve come to expect.

The limited-edition Guinness cans feature The Lobster, a characterful and vibrant illustration, and the Smiling Pint. Gilroy described himself as “a fairly jolly man” and is widely recognised for the dash of humour he brought to every piece of work.

When tasked with depicting a pint of Guinness, Gilroy responded in his signature style by inserting a smiling face into the head.

When launching the limited-edition cans, Guinness felt that this was a fitting tribute to the man himself. Through his advertising Gilroy sought to stimulate a different sense with his pint-toting crustaceans: your taste buds.

In a series of posters from the 1930s onward, he brought lobsters and Guinness together in different ways to reinforce the point that, for many palates, the best traditional pairing with Irish seafood isn’t wine – it’s Guinness.

The two designs were part of Gilroy’s larger campaign: “My Goodness, MY GUINNESS!” One of the company’s longest-used slogans, it appeared on posters from 1935 to 1966 and featured a hapless zookeeper – a caricature of Gilroy himself.

His engaging and humorous artwork continues to be synonymous with the Guinness brand. Not only did his designs put Guinness on the map as an iconic brand advertiser, they also changed the global face of advertising.

So for canny collectors of Guinness memorabilia, now’s the moment to grab a special pack for Christmas.

Fancy a five-course dinner crafted to fit snugly with a perfect pint of Guinness? You’ll want to book a space in the Gilroy Christmas Supper Club.

On Wednesday Dec 6th and Thursday Dec 7th the Guinness brewers will open their gates to some of Ireland’s most exciting names in food who will create a unique beer and food experience at the Open Gate Brewery, right at the heart of St James’s Gate in Dublin 8.

Guests will enjoy an immersive experience – a true celebration of Guinness and food, alongside a showcase of some of Gilroy’s iconic illustrations.

The culinary line-up looks certain to impress, with in-person presentations by chefs such as Jack and Theo Kirwan, proprietors of Sprout & Co Kitchen on Dawson St, who are providing season-specific sides of fresh Irish-grown vegetables. Niall Sabongi is serving up the seafood, guaranteed to feature Guinness-favourites lobster and oysters. Expect crab shack informality and mind-blowing flavour combinations found at Sabongi’s three Klaw restaurants astride the Liffey. Meanwhile award-winning chef and baker, Patrick Ryan of the Firehouse Bakery, is crafting stout-friendly desserts.

Tickets cost €40 which includes access to The Open Gate Brewery, a five-course dinner menu and two pints of Guinness Draught.

To book your tickets visit guinnessopengate.com