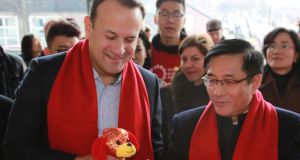 The first China International Import Expo (CIIE) will be held on November 5-10th in Shanghai. On behalf of the Chinese Embassy in Ireland, I warmly welcome the Irish delegation’s participation. I believe that the CIIE will further promote the China-Ireland co-operation, mutual understanding and friendship of our two peoples.

CIIE was initiated by Chinese president Xi Jinping at the first Belt and Road Forum for International Co-operation in 2017. With the demonstration of China’s firm support for trade liberalisation and economic globalisation, CIIE is a significant move to implement Xi’s initiative in the new era. It is one of the new major initiatives by the Chinese government to encourage countries around the world to increase export to China and jointly boost global growth and common development.

It is another courageous reform and opening move for China to hold an import-themed expo like CIIE, for a more open, more inclusive and more cooperative world, a new platform to enhance global trade and co-operation. China has opened her arms, now it is your turn and the turn of all our partners and friends to meet and embrace.

Up until now more than 3,000 companies from more than 140 countries and regions, including three authorities and 24 companies from Ireland, have confirmed their participation to the CIIE. Among those entities, nearly 200 exhibitors are in the Global 500 list. More than 150,000 Chinese and international professional buyers will also attend the event.

Come to CIIE and you will find opportunities to meet and mingle among participants and with the Chinese companies and officials from our central and local governments. In the coming five years, according to our 13th five-year plan, China is in fact expected to import products and services valuing more than $8 trillion, and its total overseas investment will exceed $750 billion, which will offer enormous business opportunities.

A wonderful foundation has been laid with our joint efforts between China and Ireland for those opportunities. Great achievements are there for all to see in our bilateral economic and business exchanges and co-operation. In 2017, the total trade volume between China and Ireland reached a new record of $11.05 billion, 36.7 per cent higher than 2016. There are about 400 Irish enterprises investing in China. China has invested a total value of $674 million in Ireland. In addition, the amount of bilateral trade has reached $6.71 billion in the first half of 2018, a 24.4 per cent increase over last year.

Market access for Irish beef exports to China was approved in June this year, and both sides are seeking more opportunities to expand and deepen co-operation. We are delighted to see that Minister for Business Heather Humphreys will lead a delegation including Bord Bia, Enterprise Ireland, the IDA and 24 Irish companies to attend the CIIE. Minister of State for Food Andrew Doyle will also attend CIIE during his trip to China. The exhibition area for Ireland covers 244 sqm and will present a variety of Irish agricultural and industrial products. The bilateral economic and trade co-operation between China and Ireland enjoys robust momentum. The CIIE will provide Irish friends new channels to do business with China, strengthen co-operation between our two countries under the initiatives including “Belt and Road” and promote common prosperity.

This drive started in 1978 and 2018 marks its 40th Anniversary. Over those years, China has transformed itself into a more prosperous and modernised country and has been making more contributions to the international society in maintaining peace, promoting common development and common prosperity. Although China has become the second largest economy and the biggest industrial country, we well know that China still has a long way to go to uplift itself onto a comprehensive and dynamic modern society.

In October 2017, our 19th National Congress of the Communist Party of China (CPC) was successfully concluded and socialism with Chinese characteristics in China has entered a new era. A three-step blueprint has shaped a long-term guide to act for the period from now to the middle of the 21st century, when China will become a great modern socialist country that is prosperous, strong, democratic, culturally advanced, harmonious and beautiful. A general goal has been set for China’s foreign policy – to join our hands with the rest of the world and build a community with a shared future for mankind. To achieve those goals,

–China will ensure long term healthy and sustainable development. New transformation in our economic and social structure and institutions will be introduced, such as supply-side reform, redressing various regional or sectional imbalances and enhancing the digital application.

–China will continue to push forward the enhancement of the society and communities, and always put people first in all our public policy considerations.

–China will continue to play a constructive, responsible and positive role for maintaining peace and security and promoting win-win co-operation in the international area. We will continue to work with all our partners and friends around the world to pursue common development and shared prosperity.

–China will continue to act as a firm defender, facilitator and contributor to the strength of the international system, the aims and principles of which are enshrined in the charter of the UN. While the global growth and trade faces new challenges, China will as always cooperate with the international community to support and maintain an international, multilateral and liberal trade system and its constructive practice, to avoid and be opposed to any kind of unilateralism, protectionism and bullyism.

–China will be committed to opening our country up even wider and deeper. We believe that with an ever more globally interwined world and international economy, it is impossible for anyone to develop behind closed doors, or isolate within the national bound. We would continue to welcome more foreign investments into China and encourage Chinese companies to go to the global market and expand trade with less barriers, lower tariffs and better help or services. Our market access will be easier with our legal system further enhanced and our business environment more attractive. We will further strengthen protection of the intellectual property rights and encourage more imports.

On June 22nd, 1979, China and Ireland signed the Communique on the Establishment of Diplomatic Relations. The year of 2019 will mark its 40th anniversary, which gives us a fresh opportunity to elevate our relationship to a new high.

An overview at this moment of our bilateral ties clearly shows that the Strategic Partnership for Mutually Beneficial Co-operation between China and Ireland is strong and is on the fast growing track. High-level visits are frequent, economic co-operation strengthened and people to people exchanges ever more active, which has served the best interests of our two great nations.

It needs to be pointed out that in those 40 years, China and Ireland have been developing exchanges and co-operation in line with the principle of equality, mutual respect and non-interference in each other’s internal affairs. It has been widely realised that China and Ireland share an increasing amount of common ground on international and regional issues. China supports Ireland to play a bigger role in the international arena. China and Ireland should join hands to maintain a rules-based international order and be committed to the facilitation and liberalisation of trade and investment. We are willing to expand co-operation with the Ireland on all fronts in the spirit of openness and inclusiveness, as well as mutual learning and mutual benefit.

Our cultural and people-to-people exchanges are also growing. The preparations for the China Cultural Center in Ireland are well on track. Last year more than 70,000 Chinese tourists came to the emerald isle, 15 per cent higher than last year. More than 5,000 Chinese students are studying in Ireland. Seven sister city relationships have been established and more and more Irish counties and cities have joined in our efforts to promote bilateral friendship and co-operation. Still, the potential for tourism, culture and education co-operation are yet to be fully tapped.

Looking into the future, we are fully confident that our relations with Ireland will continue to create more fresh opportunities and common prosperity. China will continue to develop its friendship with Ireland, with Europe, with all countries around the world to build the international community into a more harmonious and prosperous one with a shared future and common prosperity for all.