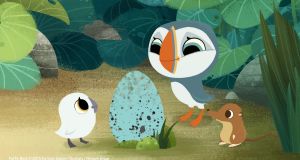 Gerry Shirren, managing director of Cartoon Saloon: “Currently, Cartoon Saloon has a number of projects in the China market with a number of different local partners such as the ‘Puffin Rock’ TV series, where we are working Tianjin-based China Nebula Productions.”

“CIIE marks the shift in China’s economic development model from export-oriented to balancing import and export needs. President Xi Jinping will attend this Expo together with other country leaders. It is estimated that 150,000 domestic and foreign professional purchasers will participate in the Expo.

“China is now the world’s second-largest importer of red meat in 2017, worth about $3.3 billion, with import volumes up 20 per cent from the year before, according to Chinese customs. It is estimated that by 2020, beef imports to China will double, as beef consumption per capita in China is still relatively low. The Chinese market provides good opportunities for certain beef cuts which complement our traditional markets in Europe. As one of the largest beef producers in Ireland, the UK and France, we expect to be in a position to supply more quality beef to the Chinese market with more approved plants in the near future.

“China is a vast and competitive market – consumer behaviour varies between regions due to different levels of disposable income, climate and taste preferences. Therefore, there is no one approach to fit all. Finding the right local business partners is one of the keys to success. In addition, China is one of the fastest-changing markets in the world, therefore you have to keep adapting accordingly.

“Through matchmaking meetings, networking and seminars in CIIE, we will engage with meat buyers from various market channels and regions in China, establishing new and long-term business relationships with customers and strengthening business ties with existing customers.”

“Currently, Cartoon Saloon has a number of projects in the China market with a number of different local partners such as the Puffin Rock TV series, where we are working with Tianjin-based China Nebula Productions. We are now following this up with a feature film based on the same IP and for the first time will be doing production work locally there in a co-production with our Northern Ireland and UK co-owners, Dog Ears Limited, and Penguin Books and China Nebula as the China production partner.

“China Nebula is also the local rights distribution partner for The Breadwinner and the film was first shown at the Beijing Film Festival, where the film was introduced by Irish Ambassador Eoin O Leary, along with Cartoon Saloon’s Nora Twomey.

“Earlier this year, we signed an agreement with VP Media, a Shenzhen-based media group relating to Cartoon Saloon latest feature Wolfwalkers, currently in production in Kilkenny and with a worldwide release, including China, planned for the end of 2020.

“With China now such an important market for us, we want to showcase our new pipeline of production, such as Silly Sundays, a new pre-school series which was launched at Cartoon Forum last month and a slate of other new development projects.

“We are in China now a number of times each year and are using all available opportunities to make ourselves known to the market there. The participation of Enterprise Ireland and Minister Humphreys’ visit to the Expo will give this significant additional profile.

“So far, doing business in China has been a great experience for us. Along with finding a new audience in cinema and on streaming services, we have also had the honour of winning awards at the Shanghai International Film Festival. We have also engaged with a number of colleges and universities there involved in film and media with presentations, screenings and workshops on the work of Cartoon Saloon.”

The Co Louth-based company was launched nine years ago by Edward McCloskey, after a six-year journey with scientists, dermatologists and microbiologists to find a way to clean new-born babies’ skin without the use of chemicals.

Sophia Zhang, head of business development for Greater China, says they are travelling to the Expo to launch the brand on JD Worldwide, the Chinese equivalent of Amazon and the largest online consumer shopping site.

“We want attendees and the public to realise that we have launched with JD and are a strategic partner of JD. Water Wipes will have a lot of great exposure and a series of marketing activities and PR events to facilitate our very fast growth in the China market.

“JD has purchased from us and the product is now on the way to China. We have done some great research and our China partners are very interested in our products and are very keen to introduce Water Wipes to a lot of retailers. They love overseas brands, especially from America and Europe, and they love Water Wipes’ uniqueness: the purity is very attractive to parents. We have similar concepts in the wipes category in China but we can’t really trust them. Water Wipes has been accredited by five countries: America, UK, France, Germany and Australia, which gives very convincing evidence and I believe it will win the trust of local consumers.

“The breakthrough innovation and pure character of the wipes perfectly aligns with market trends, which helped us earn the segment leadership in the UK and Americas in a short time. Meanwhile, we have been stepping into the Middle East and Asian-Pacific area. Now we are ready for China.”