Wearable tech: 'It has helped by putting structure on going to bed'

A new baby left Amanda Jane Sweeney getting just a few hours of rest a night, so she decided to try the Fitbit Versa 2 to see if it could help get her into a better sleep regime 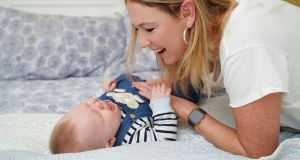 Amanda Jane Sweeney: "I have an eight-month-old baby, so I was up all hours for the first four or five months and my sleep patterns were all over the place."

There are so many reasons to get a good night’s sleep, from the impact on daily mood and productivity, to the longterm health effects when we consistently scrimp on it. But despite the abundance of advice available, it is an area that most of us struggle with.

Sleep analysis has been a mainstay of wearable technology for the past decade, and the latest generation of devices are bulking out their arsenal of tools to lull us to sleep, rather than relying on statistics alone.

After a new addition to the household left busy solicitor and mum of three Amanda Jane Sweeney getting just a few hours of rest a night, she decided to try the new Fitbit Versa 2 to see if it could help get her into a better sleep regime.

What did a normal night of sleep looking like?

I have an eight-month-old baby, so I was up all hours for the first four or five months and my sleep patterns were all over the place. His sleep started to stabilise at about six months, into going down at half eight, and more or less staying down for the night, or until 4.30 - 5am. But the problem was that I wasn’t really going to bed early enough when the opportunity was there to do so.

There are two older kids as well, so by the time everyone is settled that would be my time to get a cup of tea, stick something on the television, and then browse on my phone. Four or five hours could go that way. I'd stay up until half past twelve or one, and then up again around four or five to feed the baby before he went back down again. So my sleep was sporadic, and I was feeling wrecked all the time.

What changed after using the device?

What I found useful was the watch gives me a little reminder to start winding down and get ready for bed, and it actually works. There is information in the app about how to wind down, like to try to stay away from using screens in bed, and I tried to stick to that.

And the actual watch has a relaxation app on it, so you can do that and it guides you through some breathing exercises - it shows you a circle and you breathe in and out at the same rhythm as it expands and contracts, and it buzzes on your arm so you can close your eyes to do it too.

At first I thought it sounded ridiculous, because it's such a simple thing, but I found it does help you to wind down and lower your heart rate, and get you into a place where you're ready to sleep.

My new goal is to go asleep at 10.30pm, I get my notification at 9:45pm to start getting ready to sleep. So that gives me time to finish what I'm watching or get things ready for tomorrow, and then I'll usually be pretty good at actually going to bed and doing the relaxation exercise.

It did made me look at that time in the evening a little differently, because I thought it was my only time to myself - you think you're having a bit of downtime, but I realised I was actually just wasting the time, and I'd feel much better for letting myself catch up on the sleep I needed.

How has it been waking up?

Much better - one of the things I really like is the silent alarm, it's a gentle pulse that keeps pulsing until you switch it off or snooze it. And I found that great because it is not disruptive for anyone else in the bedroom.

I‘ve ended up getting quite obsessed with the sleep statistics. When I get up in the mornings, the first thing I'd look at would be the data on how I slept. I find this model more accurate than other ones I'd used in the past, where I knew I'd been awake but they'd tell me I slept the whole way through. The analysis is good because it tells you how long you were asleep for, and how much of it was deep sleep, how much was REM, and how much of it was good restorative sleep.

It gives you an overall score based on how you slept, so my average score now is 80, which is pretty good. I found that once I started looking at my score, I wanted to maintain it. So if I got a score for a 'fair' night, I'd be conscious that I'd better get into bed on time to make sure I'm back on track. When the report is there, it makes you feel more accountable. It is there in black and white if you didn’t go to bed on time, so I think that really helped motivate me to change the late night habit.

Anything else surprising about the experience?

Obviously there’s a lot of apps and prompts for fitness, and I’ve been more conscious of exercise and the role that can have in getting a good night’s sleep.

Also one of the biggest benefits is that I don't need to bring my phone into the bedroom anymore, I can just leave it downstairs. I was bringing it to bed to use as a clock and alarm, but of course I'd be looking at it before going to sleep or if I woke up in the middle of the night, so this has actually removed that temptation entirely. Overall I think it has helped by putting structure on going to bed for me. Sometimes you just need someone else - even if it is a watch - to tell you to do it.