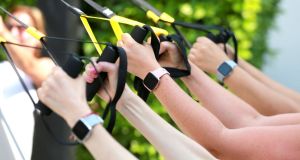 The Fitbit corporate health solutions programme has proved popular with professional services firms such as Accenture, and also manufacturers such as Keystone Lintels.

The focus on employee experience has been growing in recent years, with organisations seeing the benefits of a healthier and happier workforce, and candidates gravitating toward companies that have a proven record of promoting employee wellbeing.

With increasing competition between organisations for national and international accolades many companies are now looking at new ways to encourage employees to keep active and connected.

“Initially we started looking at introducing Fitbit to certain industry segments, thinking some would be more open, whether it was a health and safety need, or a company with a high tech culture,” explains Aideen O’Colmain, Corporate Wellness director EMEA at Fitbit. “But actually the common factor is awards, the companies who are working with us tend to go for IBEC Awards or Best Place to Work kind of awards, rather than being segmented by industry. We get a real mix of companies getting involved, 50 employees is usually the starting point but we have had smaller groups, and most often it would be several hundred.”

The corporate health solutions programme has proved popular with professional services firms such as Accenture, and also manufacturers such as Keystone Lintels. Through a company sponsored program, employees can purchase a discounted Fitbit, choosing from the range which covers everything from minimalist tracking bands to smart watches like the latest Versa 2.

“The draw for the employee is that they get access to everything that you traditionally have in the Fitbit arena at a reduced rate,” says O’Colmain. “You'll have people who would naturally go for a Fitbit anyway, who may be reasonably healthy, and you get people who want to get healthier. With the corporate connection, there is definitely extra incentive.”

Participating in challenges allows an administrator to view some of the individual employees Fitbit data, such as the amount of steps taken. “It's great where you have multiple offices,” says O’Colmain, “you can run challenges across buildings, across floors, and even across countries and continents. We're running one at the moment across EMEA.”

While there are several preset challenges to roll out, lasting from weeks up to six months, many organisations design their own with support from Fitbit. “We had one company who had a transatlantic pipeline. They wanted to collectively walk the length of that pipeline. So they worked out the length of the pipeline and how many total steps that was going to be and that was how they structured their challenge,” says O’Colmain.

It can be a great way of bringing people together, so you can run a challenge between the office in Dublin and the office in Kilkenny

“Another company walked the distance between their offices in UAE and Japan. And they mapped a route between different countries, so they stopped off in each country as they metaphorically arrived there. So they would have food from that country in the canteen that week to represent each country they travelled through on the challenge.”

“It can be a great way of bringing people together, so you can run a challenge between the office in Dublin and the office in Kilkenny. You get a kind of community that is built. I think you need to go into it thoughtfully, and put time into figuring out what you want to achieve,” she says. “Do you organise your teams by function, or by location, or just a random mix? At the end do you want people to get to know each other, or do you just want to encourage better health. Spending a bit of time figuring out what you want to achieve is worthwhile to get it set up at the beginning.”

O’Colmain found some of the hidden benefits of the challenges when she organised one for the Dublin Fitbit office. “There was one employee who wouldn't have done a lot of exercise, and she would have been a very quiet person who kept to herself. Her team were at the bottom of the league and she sent them all a note saying that they might not make it to the top, but they were definitely not going to finish at the bottom. She figured out how many extra steps each member needed to do, and she got the bit between her teeth and really started to make a huge effort. We saw a completely different side of her, in the normal work environment that side of her hadn't come out.”

The benefits to the companies running the challenges are measurable, says O’Colmain. “People are drawn in to the culture of the company a little more. It's a bit of a laugh, and it's something to talk about. You get to interact with people you may not have met before, or who you only contact through email, so it changes the workplace dynamics,” she says. “We had several helpdesk companies who used customer satisfaction figures as a metric, and they saw an improvement in that after the challenges. They found that employees had actually got chatting to colleagues in other parts of the organisation and now they had a better sense of where else they could go to help solve a problem.”

While employees can also benefit from other Fitbit functions, such as sleep analysis, guided relaxations, and workouts, these tend to not be used in challenges. The company plans to roll out further developments such as Fitbit Health Coaching, which allows employees to connect to a health coach who can set bespoke health and fitness goals for each individual.

“At the end of the day it is about encouraging people to be more active,” says O’Colmain. “We can see that during a challenge period, people do on average 1100 extra steps. If you look at that on a graph, you get this peak during a challenge, and then it returns to normal. But we can see that when you get down to this baseline, the new normal is higher than where you were at before. So you gently bring people up in terms of their time moving, they find their own little ways, like getting off the bus a stop or two earlier and walking in past the traffic. Each individual finds the things that actually work for them, and they keep them going outside the challenges.”