On the road to a low-carbon future, ESB Networks has chosen the Dingle Peninsula for a three-year project designed to plan Ireland's future renewable energy needs 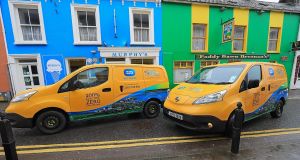 ESB Networks has chosen the Dingle Peninsula as a location to develop new technologies for a smart, low-carbon energy network of the future

ESB Networks has chosen the Dingle Peninsula as the location for a highly innovative three-year project which will see the deployment of a range of new technologies to assist in the development of a smart, resilient, low-carbon energy network of the future.

This follows almost 10 years of research and trialling by ESB Networks which has seen the organisation initiate a variety of new work streams and projects to pave the way towards a low-carbon energy future for Ireland. These cover a broad range of areas including connecting renewables, customer engagement, electrification of heat and transport, asset optimisation and network resilience.

“These projects involved the deployment of new technologies on different parts of the electricity network and have helped us gain an understanding of what a smart grid looks like from a practical point of view and how the network might develop,” says Jonathan Sandham, smart networks manager with ESB Networks. “We now have the opportunity to put a number of these technologies together in one location.”

One of the main reasons for choosing the Dingle Peninsula is its often challenging weather conditions. The area experiences an average of 30 storm days per year, with inevitable consequences in terms of power outages.

This makes it an ideal location to test new network resilience technologies. Using smart technology, ESB Networks is able to divide the network into 100-meter segments and automatically isolate any section where a fault has occurred, for example, if there is a fallen tree. This means that an event which, under normal circumstances, could result in thousands of homes and businesses losing power, would only affect a handful because the network becomes self-healing.

“Dingle was also chosen because it offers access to a wide range of scenarios in which to trial different solutions before rolling them out nationally,” says Sandham.

These include the fact that it has a good size population with 4,772 homes and businesses connected to the network. It also has a large number of tourists in the summer months; both urban and rural customers; some wind generation; a coastline subject to harsh weather conditions; and a good range of houses and buildings such as new estates, older estates and one-off housing, which allows ESB Networks to observe the impact of different electric heating options on the network.

While greater use of renewables such as wind and solar will play a role in decarbonising Ireland’s energy usage, a low carbon future will have to be much broader than just electricity generation, according to Sandham.

“About 20 per cent of Ireland’s carbon emissions come from electricity, with another 19 per cent from heating and 23 per cent from transport. By taking carbon out of electricity generation and using this clean electricity to heat our homes and fuel our cars, it is possible to reduce Ireland’s carbon footprint by over 50 per cent. Our job in ESB Networks is to make sure that the network can fully support this transition and does so in a way that meets the evolving needs of customers,” says Sandham.

Customers traditionally have had very little interaction with the electricity system except to turn on a switch when they needed power, but this is changing as new technologies emerge. “We have to be led by the needs and behaviours of our customers,” says Sandham. “We want to know what’s important to them and how they see themselves using electricity and energy in the future.”

There are three separate streams to the overall project: engagement, network and ICT.

“In the first stream we want to find out what consumers want and which of the new technologies like heat pumps, electric vehicles, battery storage and small-scale renewable they find most useful and easy to adopt,” he says.

“We will also look at the needs of community groups like local GAA clubs and so on. They may, for example, see a benefit in using local small-scale electricity generation to pay the light bill for the local sports club. We have a lot of different technology options for the network, and by engaging with customers and understanding what matters to them we can develop the best solutions.”

The network element of the project primarily deals with resilience, and ESB Networks will invest in technologies to assist in minimising downtime and improving the overall reliability of the network. As Sandham explains, in the past a power cut in a home might mean breaking out some candles but the house could still be heated and you could still drive to work in the morning. This might be more challenging in the electricity-dependent home of the future.

The self-healing nature of the network will assist greatly in this area but there are other technologies which can be deployed using a smart network. For example, power could be restored in increments following an outage – this would allow people enough power to charge up their phones perhaps, but not enough for heavy-duty usage. In addition, there would be the possibility of sharing stored energy from batteries in other people’s homes to get enough of a charge to get a car to a charging point in an area unaffected by the outage.

The ICT and innovation stream will deploy smart technologies to help consumers manage their electricity better, both to their own advantage and that of the network.

By trialling these technologies now, we can see what works in the future

“If a home has a heat pump and some solar photovoltaic generation, as well as some battery storage installed, they will generate and consume energy at different times of the day,” Sandham explains.

“For example, solar might be delivering power in the early afternoon while the main demand for electricity in the home is between 5pm and 7pm. Using smart technologies, the consumer can opt for these to be automatically managed according to their own specific lifestyle requirements. For example , their battery storage could be used for some of the early evening demand while the car could be charged when renewables become available on the network later on.”

Technology will also enable new services such as peer-to-peer electricity sharing. This would see a household with generating capacity sharing that with neighbours from time to time. It could also see people with battery storage sharing with the network to help smooth out peaks and troughs in supply and demand.

“By trialling these technologies now, we can see what works in the future,” says Sandham.

“Hopefully, in three years’ time at the end of the project we will have a working model or prototype of the mix of technologies which can deliver on the needs of customers and support Ireland’s transition to a clean energy future, and Dingle will have a more resilient network.”