Derry is the perfect base for exploring the Wild Atlantic Way and the Causeway Coastal Route, but with much of the best of the northwest located in the city itself, you may want to just stay put 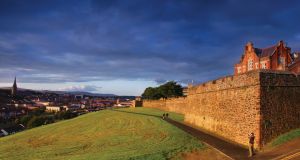 Derry’s walls are the only completely intact city walls in Ireland, and a walking tour is a great way to begin your stay, to familiarise yourself with its history.

From its 17th-century walls, which celebrate their 400th birthday this year, to the world-famous Bogside murals, Derry’s bricks and mortar are steeped in history, heritage and culture.

More recently, the city’s masonry has been bedecked in cutting-edge graffiti, and depicted in the hit TV show Derry Girls, where an ill-judged gable mural is the source of much comedy.

In addition to all these distinctive walls, Derry is emerging as a jewel in Ireland’s foodie crown with innovative street food, gourmet options and locally produced craft beers.

Just a few hours from Dublin, with Donegal and Tyrone on its doorstep, it’s also the perfect base for exploring the Wild Atlantic Way and the Causeway Coastal Route.

But with much of the best of the northwest located in the city itself, you may not want to leave.

A walking tour is a great way to begin a short break in Derry, to familiarise yourself with its history. City Walking Tours operates up to four daily tours of about one hour’s duration, with the slogan, ‘Rain, sleet or snow, our walking tour will go’.

This lively walkabout details the Siege of Derry in 1689 (when Protestants held the walled city, in the face of Catholic King James II, for 105 days), the once thriving shirt industry and the city’s more recent turbulent political history including Bloody Sunday.

Derry born and bred Garvin Kerr has spent 12 years as a City Walking Tours guide – or “driving people up the Walls”, as he puts it.

“I’ve never got tired of the tour, because I’m so proud of my city,” says Garvin.

“We’ve had people from all over the world. You name the place, we’ve had them. We’ve had Saoirse Ronan, Susan Boyle and Will Ferrell on the tour - he was recommended to come by someone in Hollywood, so we must be doing something right.”

Derry’s walls are the only completely intact city walls in Ireland and, nestled within them, by Magazine Gate, you’ll find the excellent Tower Museum (pictured above). Permanent exhibitions housed within the museum include the Story of Derry and An Armada Shipwreck – La Trinidad Valencera. The latter tells the story of one of the largest ships in the Spanish Armada, which sank off the coast of Donegal in 1588 and was discovered by Derry divers in 1971.

In the Bogside, near Free Derry Corner (the name given to the part of Derry barricaded off from security forces in the late 1960s and early 1970s), is the Museum of Free Derry. Inside, you’ll learn about the civil rights movement of the 1960s, Bloody Sunday and the Battle of the Bogside. There are personal testimonies from many of those involved, and poignant artefacts from the time.

Take to the water

A more unusual way to get acquainted with Derry is through a paddle-boarding tour along the River Foyle (above). The tour, run by eco-adventure company Far and Wild, will take you from the Prehen area in the Waterside to Foyle Marina in around 20 minutes, tide depending.

“We look at the city from a maritime perspective, why Derry was built the way it was, the geo-history of the place, and the social history,” says Far and Wild director Lawrence McBride.

You should spot plenty of birdlife on the tour including herons and egrets, and you may even see the occasional otter or seal popping its head up.

Far and Wild also run moonlit kayaking tours, and paddle boarding by night. “In calm and glassy conditions, it’s absolutely gorgeous at night,” says Lawrence. “You feel like you’re on another planet.”

As for fitness levels required? “As long as you’re fit enough to go for a walk or a cycle, then you’re good to go.”

Across the Foyle in the Waterside, a former military barracks in Ebrington Square is now home to the Walled City Brewery. It’s a fully operating brewery as well as a restaurant, serving up delicious food (try the beer cheesy chips) and craft beers named after aspects of Derry (including Kicks, in homage to The Undertones’ Teenage Kicks). The brewery is linked to the city centre by the Peace Bridge, a striking symbol of hope that opened in 2011.

Elsewhere, The Warehouse Café and Bistro near the Guildhall Square dishes out fresh, locally sourced produce with bread from Donegal, and cheese and bacon from nearby Claudy and Culmore. Upstairs you’ll find a gift shop featuring local arts and crafts.

The Warehouse Café and Bistro now has a dog café serving up puppuccinos, hambarkers and scoobie snacks to diners’ four-legged friends.

By night, Derry comes alive with music and craic. If it’s live traditional music you’re after, you’ll find it in Peadar O’Donnell’s pub on Waterloo Street. The Guildhall Taphouse, in a 19th century merchant building, serves up Irish and international craft beers and cocktails. For a Latin American vibe, check out the laidback Sandinos bar on Water Street.

Accommodation at the Bishop’s Gate boutique hotel starts at £119 (approx €136) bed and breakfast per room per night based on two people. The former private member’s club, which dates back to 1899, was recently listed in the 45th anniversary edition of Ireland’s prestigious Blue Book, along with being named as the second best hotel to visit in the UK, in the 2017 TripAdvisor Travellers’ Choice awards for hotels. Situated centrally, near the city’s courthouse, it has a suitably named Wig Champagne Bar and Gown Restaurant.

Situated on the bustling Shipquay Street, the Shipquay Boutique Hotel which opened in 2017, overlooks the city's walls and the Guildhall town hall. Rooms start at £90 (approx €123) bed and breakfast per night, based on two people. Its Bottomless Brunch includes unlimited prosecco, Bellinis, Mimosas or Bloody Marys over a two-hour period, plus brunch, for £24 (approx €27.50) per person.

“Belfast has beautiful buildings, the people are so friendly and the food is unreal”

Work up an appetite along the Causeway Coastal Route

Northern Ireland: discover one of the world's best food destinations this autumn