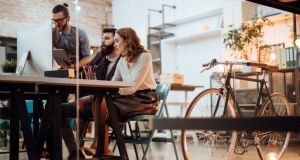 The results of the latest Deloitte Millennial Survey indicate that younger workers are looking to business leaders to drive societal and economic change. This presents an opportunity for organisations to attract, retain and engage this generation.

However, the survey, which looked at the group born between 1983 and 1994, also found millennials hold quite a low opinion of those same business leaders. More than four-fifths (82 per cent) of Irish millennials surveyed think businesses focus on their own agendas rather than considering society in general. Almost two-thirds (64 per cent) believe that businesses have no ambition beyond wanting to make money.

Equally damning was the finding in relation to corporate behaviour with just 34 per cent saying they believe businesses behave in an ethical manner while just 31 per cent agree that business leaders are committed to helping improve society.

While these findings may be somewhat shocking at first glance, Valarie Daunt, partner and head of human capital at Deloitte, believes they may not be all that surprising. “You have to wonder if millennials are really all that different from previous generations,” she asks. “Is there an element of youthful idealism at play here? We all like to think we are going to change the world when we are 20 or 22.

“What is quite interesting is the increase from 59 per cent last year of those that think businesses only focus on their own agendas,” she adds. “Maybe the change is due to disappointment. Perhaps there is a feeling that nothing has changed in the period.”

Another interesting finding in light of widely held beliefs in relation to millennials’ outlook on life related to their priorities when it comes to choosing an employer. Financial rewards and benefits came out on top with 74 per cent of respondents citing them; next came flexibility at 64 per cent; while 57 per cent mentioned a positive organisational culture.

That emphasis on financial rewards may seem contradictory given the group’s feelings about companies that are primarily driven by profits, but it reflects the fact that maturing millennials may be saving for their children and struggling to purchase homes.

There was a marked difference between the results of the global and Irish surveys in this respect. Globally, financial rewards were the most important factor for 63 per cent of respondents, a positive workplace culture came in second at 52 per cent, while flexibility was third on 50 per cent.

This may reflect Ireland’s strong economic environment, according to Daunt. “We are now near full employment and there are lots of job opportunities for people,” she notes. “We now have the ability to choose how and when we work. Work life balance and flexibility is much more important in that context.”

That desire for flexibility is also apparent in the growth in attractiveness of the gig economy among Irish millennials. Forty per cent of Irish millennials would consider joining the gig economy instead of their full-time job in comparison to just 25 per cent in the 2017 survey while 68 per cent would be open to supplementing a full- or part-time job with a contract role. These results suggest that millennials may be looking beyond traditional careers and are open to alternative models.

Gig economy opportunities may be rather thin on the ground in Ireland, however, with a recent ESRI report indicating that it is not prevalent here with approximately 9 per cent employed in non-permanent roles – this is below the EU average.

“The gig economy is very attractive,” says Daunt. “But employment regulations may be having an impact on it [in Ireland]. There is a social policy piece to be considered here. Also, organisations will have to look at how they structure themselves to be able to offer opportunities of this nature to millennials.”

The results in terms of diversity and retention were also very interesting. The survey found that 67 per cent of Irish millennials feel that they work in a diverse organisation. In addition, 44 per cent of Irish millennials report that their senior management teams are diverse. However, while just 13 per cent mentioned it as a priority when choosing an employer, of the 25 per cent who say that they will stay with their current employer for more than five years, 86 per cent report that they work in a diverse organisation. This suggests that while diversity may not aid recruitment it may have a powerful impact on retention.

“Flexible working arrangements also enhance the degree of employee loyalty,” Daunt adds. “The overall message for employers is that outside of financial rewards they have to look at more holistic offers to attract and retain millennials. Also, millennials are looking to business leaders to shift organisations’ motives from focusing on making profit to balancing social concerns, and to be more diverse, flexible, and generous with its employees. Those organisations that are able to deliver will likely attract and retain the best millennial talent.”

For more on the Deloitte Millennial Survey, see deloitte.ie/humancapital