Getting to grips with the growth driving your baby’s development

A six-month-old baby is developing at an amazing rate, using language and touch to try and make sense of their place in the world 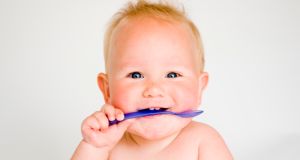 At six months old your baby explores the world not just with their hands but with their mouth. Photograph: iStock

Your baby’s development at six months is incredible. Their brain is already on its way to doubling in size since birth and that growth brings with it the ability to do so many new things. Speech sounds, movement, controlled emotion, inquisitiveness, sight and recognition. All these tremendous steps forward are directly related to their brain development and adults are fascinated to see it occur. Major milestones seem to come every day at this stage of their lives but here are some of the most fascinating.

Push and pull
Your baby may be able to pull an object towards themselves, push it away and pass it from one hand to the other. Picking up and dropping things becomes something that your baby genuinely enjoys.

They may have developed an interest in different textures, colours and materials - touching, squeezing and patting things as they go. Items which can be squeezed or which make different sounds when pressed become endlessly fascinating.

Their vocal skills develop
A baby’s vocal range is developing rapidly to include bubbles, babbles, squeaks and squeals. Their brain is receiving reports about their environment and experiences and this stimulates neural activity. They may repeat one-syllable sounds like ba and ma forming new sounds. You might even find your baby joining syllables together at this stage as vocalisations increase. Repeated experiences cause the neural connections to become well worn pathways, making each new sound combination easier to repeat. Language naturally follows.

Food becomes fascinating
Ever get a sense you’re being watched? At this stage your baby may become mesmerised watching you while you eat. Expect rapt attention at dinner time and don’t be surprised to find someone making a lunge at what’s on your plate. Their inquisitiveness is driving experimentation and new experiences.

They explore with their mouth
Similarly with reaching out to grab, at six months old your baby explores the world not just with their hands but with their mouth. It’s a classic case of “suck it and see” where every conceivable object is liable for a quick taste. They’ll also place objects they find into containers or drawers. Researchers say this is an important cognitive exercise, marking the point where your baby begins to understand that an object may not have disappeared, it's merely hidden. This is a powerful realisation for a baby, it’s claimed. They are realising that they have control.

They get ready to roll
It’s at this stage that some babies explore the art of rolling, quickly using it as a way to cross entire rooms. Rolling is a major step on their journey to independent travel and you can encourage your baby to move by placing a toy just out of reach – next stop crawling. Place a mirror in front of them and watch them interact. Up until now it was simply another object – now they have a sense that one of the objects they are looking at belongs to them. This is a powerful idea.

Grabbing  your attention
Your baby now learns that crying isn’t the only game in town. They begin to understand that they can get your attention just as quickly by babbling, blowing raspberries and even wriggling, and they don’t mind how they get your attention, just so long as they do. You can get their attention now too – at six months researchers claim that babies can recognise the sounds that make up their own name. The more they hear it the more they understand it.

They love to play games
Your six-month old baby loves to play games, especially repetitive ones where you mimic them and they mimic you – endlessly! It’s a great time to start reading to your baby too, and to play games such as ‘cows go moo’.  It is said that a baby in an English-speaking home can distinguish between the sounds of a foreign language at eight months, but they lose this ability by 12 months as they become wired to one language. Games like peek-a-boo are great fun at this stage too, and help teach your baby an important lesson – even when they can’t see you, you’re always there!

If you want to read more about how your baby is developing visit www. aptaclub.ie