Carphone Warehouse has supported Irish customers as we’ve moved from Nokias to the smartphone era. This Christmas, they’ve got top advice for what to buy 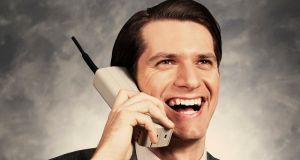 The first mobile phones were aimed at businessmen, sales representatives in the medical field or just for anyone on the move. Photograph: Getty Images

“Hiya, Kate! It's me, the guy from the bar!” There are few sentences more iconic to an Irish millennial than this, from Esat Digifone's 1999 ad for the mobile phone – or, rather, to showcase, more specifically, the advantages of text over talk.

It's almost as memorable a moment as the day, 35 years ago in 1985, when then-Minister for Communications Jim Mitchell made the inaugural Irish mobile phone call to none other than Pat Kenny, where the two began to discuss the truly urgent matter of the day: Kenny's recent most stylish man award. “Well it's quite simple minister, in RTÉ we can dress for half price because we only have to dress from the waist up,” he quipped.

The call coincided with the launch of the new Eircell mobile phone system, where, for a mere £1,400 Irish pounds (€3,562.46 in today's money, according to cso.ie) you, too, could get your hands on a brick-sized communications device, and wander down Grafton St chatting to your friends to your heart's content.

Then-director of Telecom Éireann, Chris Lowe, declared the new technology would be of much use to “businessmen, sales representatives in the medical field or just for anyone on the move” – an expansive enough list but one which, in hindsight, seems to fall short of our reality today.

It's fair to say that we're as attached to our phones than ever – and who could blame us?

From there it was a mere hop, skip and a jump to the golden year of 1987, where the mobile phone made its Hollywood debut in Lethal Weapon, before taking on a more significant role in Wall Street, in the same year, as a symbol of Gordon Gekko's (played by Michael Douglas) power and clout in the world of New York city stocks.

The mobile phone has played many a supporting role in a Hollywood blockbuster over the years, from Cher and Dione's flip phones in 1995's Clueless to Neo's Nokia 8110 in The Matrix (1999) and, of course, Derek Zoolander's teeny tiny matchbox-sized phone in 2001's Zoolander.

By then, of course, the mobile phone had become somewhat ubiquitous; Carphone Warehouse opened its first Irish shop in 1996, offering pre- and bill-play plans with an array of mobile phone networks in the Republic, and soon afterwards even Barbie had fallen in line. Mattel added a candy-pink cell phone to Barbie's accessories collection in 1999, endowing her with all of the technology she'd need to be a thoroughly 21st-century gal.

By 2001, Carphone Warehouse had 20 stores in Ireland; by 2007, Steve Jobs was launching the world's first iPhone while Gossip Girl was introducing a world of teenage girls to the form-over-function allure; and by 2019, a Deloitte survey was telling us that 96 per cent of Irish people owned a smartphone, and the typical user was checking their device 50 times a day.

It's fair to say that we're as attached to our phones than ever – and who could blame us? With high-spec cameras, instant messaging, social media apps, maps, breaking news and all of the knowledge Google can provide, our smartphones offer all of the functionality of an atlas, encyclopaedia and phonebooth (remember those?) combined, all while fitting into our pockets.

For those looking to gift their children with their first smartphone, prepay phones are a good option

This Christmas, after a year where keeping in touch with loved ones via phone has been more important than ever, a new mobile phone makes a great gift option. Carphone Warehouse offers handsets from all network operators, from SIM-free to prepay and bill-pay phones as well as pre-loved iPhones.

[For your chance to win a Samsung Galaxy S20 Ultra 5G with Carphone Warehouse, enter now]

Séamus McCormack, commercial director at Carphone Warehouse, has a few tips for those shopping for smartphones this festive season. “For those looking to gift their children with their first smartphone, prepay phones are a good option,” he says. You'll get yourself firmly in the good books, know that they're contactable at all times and, with an array of great deals, you'll find something that fits firmly within your budget. McCormack recommends the Samsung A21s, which offers “great value for money”. Prepay starts from just €89.99.

There are also lots of options when it comes to keeping your kids safe online – Google's Family Link gives you oversight into what your children are viewing online, and allows you to set ground rules as to what's allowed – and what isn't.

“For those looking to move into the world of bill pay, consider the Huawei P30 Pro NE,” says McCormack, “which is from free when you switch to Vodafone’s €40 a month plan or from €49.99 when you switch to eir’s €39.99 per month plan. For additional savings, customers who bundle with an eir Fibre Broadband package will get €10 euro off their monthly bill pay plan.

The Huawei P30 Pro NE has a Leica Quad camera system with four in-built cameras, a 6.47-inch OLED screen and 8GB of RAM with 256GB of storage, making it ideal for the budding photographer. “The phone also boasts excellent battery power, so you don't need to worry about the dreaded dead battery, mid catch-up!” says McCormack. At the very upper end of the spectrum, then, are the Samsung Galaxy S20 Ultra 5G or the iPhone 12.

“The Samsung has a beautiful design, superb image quality and the 5G functionality means it is ideal for anyone looking to future-proof their phone's connectivity.” The Samsung Galaxy S20 Ultra 5G is €1349.99 sim free, or from €599.99 when you switch to a €60 a month plan with Vodafone. McCormack adds, “The quality makes it worth the investment”.

As for the iPhone 12, it's also a very impressive flagship that’s got that future-proofing 5G, “superb camera quality and a top-tier processor,” McCormack says. You can get iPhone 12 from free when you switch to a €60 a month plan with Three.

All future-proofing aside, if you're feeling truly nostalgic for the golden era of mobile phones, you can download Snake '97 on iOS and Android. It'll turn your screen into a Nokia 3310 while you test your coordination skills and realise just how long it's been since your game-play glory days.

How do I know which plan is for me?

How much data do you use? Are you using data for sending occasional messages, or do you use it for streaming and video calls?

Are you a big caller or texter? If so, you'd want to opt for a plan that includes a certain number of minutes and texts.

Because Carphone Warehouse is network independent, you can compare plans from all the major networks and decide on the one that’s right for you and your needs.

Carphone Warehouse's experienced advisers can talk you through the options, evaluate your current phone usage and help you figure out what handset – and plan – will offer the best bang for your buck. carphonewarehouse.ie

For your chance to win a Samsung Galaxy S20 Ultra 5G with Carphone Warehouse, enter now

24 month contract applies to all bill pay offers and are subject to customer porting a number to the relevant network. Handset availability and pricing on alternative networks may vary. Advertised Pay as you go offer is subject to porting a number to Vodafone and requires a minimum top up of €20. See carphonewarehouse.ie for a full list of terms and conditions.