Cadbury Dairy Milk Freddo Treasures Family Space Camp promises to be a week of fun and informative virtual online activities, events and much, much more 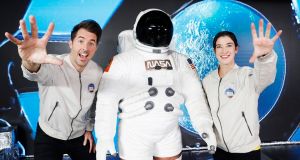 As a long-standing advocate of the importance of spending family time together, Cadbury has brought Norah, who is gearing up to become the first Irish person in space, and Mark, more commonly known as TV’s ‘the science guy’, together for this fun and educational week.

When it comes to reaching for the stars, one of the most exciting and interesting jobs is that of an astronaut. But what does it actually take to become a future cosmonaut and rocket launch into outer space?

That question (and loads more!) will be answered by aeronautical engineer, Dr Norah Patten, and Mark Langtry, theoretical physicist and head of sport and science at Explorium in Dublin, at a very special virtual Cadbury Dairy Milk Freddo Treasures Family Space Camp taking place this August.

As a long-standing advocate of the importance of spending family time together, Cadbury has brought Norah, who is gearing up to become the first Irish person in space, and Mark, more commonly known as TV’s ‘the science guy’, together for this fun and educational week.

The camp will run every day from Monday, August 24th to Friday the 28th, on The Irish Times website – irishtimes.com - and families can expect a range of exciting online activities and events, including fun and interesting guests such as a former astronaut, who will talk about their experiences in space.

In fact, there has never been a better time to learn about the subject as there has been a slew of cosmic activity in recent months, including the SpaceX Crew Dragon and the Mars Perseverance launches.

Norah, who studied aeronautical engineering at the University of Limerick, developed a passion for space when she visited NASA in America at the age of 11 and knows that many will have been fascinated by both launches in the last couple of months.

“I was living in Ireland in the 1990s so visiting NASA was a huge eye opener for me. We were doing the usual tourist trail but at NASA I got to see the wind tunnels and the aircraft on the ground outside.

No matter what you want to become, be it an astronaut, scientist ... or professional footballer, understanding the world around you helps you perform better in it

This was a whole different world to me. I became obsessed with space,” she says.

That fire and passion never dimmed throughout secondary school or university and Norah is now working towards a space mission. In 2017, she was selected to participate in Project PoSSUM (Polar Suborbital Science in the Upper Mesosphere), a citizen science program preparing candidates to fly as researchers on sub-orbital spaceflights. Norah has participated in several PoSSUM campaigns including microgravity research flights, spacesuit testing and evaluation, high-g flights and spacecraft egress."

Norah promises to bring all of that knowledge to the Family Space Camp, having co-ordinated a very special week-long programme that will look at various aspects of a space mission.

“There will be lots of hands-on activities for all the family. We will have interesting guests talking about living in space and preparing for space. We will go off site to places like Birr Castle - for 70 years the telescope there was the largest in the world, so that will be a lovely exhibition, and it’s a great family friendly place to visit too,” she says.

Making science engaging for all age groups is one of Mark’s goals for the week.

“This is fun and educational and I want families to learn more about the world around them,” he says.

Mark says, “no matter what you want to become, be it an astronaut, scientist, piano teacher, movie star or professional footballer, understanding the world around you helps you perform better in it.”

In fact, Mark can tick two of those off, having for 10 years successfully balanced playing at Shamrock Rovers and UCD, then captaining the Irish Indoor Football team while pursuing his love of science. Blending the two was a “dream come true”, but he says his real passion is now being a “science communicator and STEM influencer”, talking to people about the subject and engaging them with it.

“During the week we will teach people what they need to get to space - we’ll have astronaut training, involving physical and mental tasks. Norah is the most inspiring person ever, with what she has been doing in her quest to become Ireland’s first astronaut. She will explain her journey, as well as talk to other NASA astronauts or people who work in the sector to find out what’s it like to be an astronaut,” he says.

Experts will explain what it is like inside a rocket during take-off; how the astronauts live in space and the foods they eat. There will also be fun demonstrations where Norah and Mark are put through their paces.

“Becoming an astronaut was a dream of mine too, so I want to know if I have what it takes to become one. I am looking forward to doing some of the physical and mental tests to see how I get on,” Mark laughs.

“We will be reconstructing g-force on an upside down bike and will be testing vehicles that can travel very fast. These things can make you feel a little queasy so we are recreating space conditions. I’m looking forward to that!”

Cadbury wants to emphasise that the week is about shared family experiences and therefore it doesn’t matter age or ability-wise, because science is for everyone. It is about developing people’s attitudes to science and science, technology, engineering and maths (STEM) in general.

“Most kids have an innate curiosity about the world, so it’s about building on that so it can flourish. I remember being obsessed with looking up at the sky as a kid and wondering, ‘what is up there’. Luckily my family and teachers helped foster that in me,” Mark recalls.

“We need young people to be the scientists of the future. In the last few months we have learned the importance of understanding science; that’s what is going to help us get out of this strange situation we find ourselves in. We hope Cadbury Dairy Milk Freddo Treasures Family Space Camp will give people the tools to learn,” he adds.

With a huge connection to space in Ireland, and with so many of those working in the industry involved in Space Camp, the week is shaping up to be an otherworldly experience for all!

Rockets at the ready for today’s Family Space Camp