Sage are taking over as title sponsor for this year’s awards, which are set to be even busier than last year’s 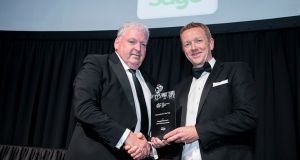 This year’s Irish Accountancy Awards will take place on April 16th at the Clayton Hotel Burlington Road, Dublin. It’s the fifth year that the awards are being held, and the 54 companies shortlisted in the 19 categories represent an increase from last year of more than 14 per cent. And although they’ve sponsored categories at the awards in the past, this is the first year that Sage will be taking over as title sponsor.

Originating out of Newcastle University in the UK, Sage was formed in 1981 and today has over 13,000 employees serving more than three million customers in 23 countries, covering mainland Europe, Africa, Australia, Asia, and Latin America.

While between the UK and Ireland, there are now over 140 000 businesses using Sage for their payroll. Making Sage the market leader here for technology designed to help small and medium businesses with their integrated accounting, payroll, and payment systems.

I’m proud of the role that Sage has played in Ireland over the past 20 years. With 60 per cent of Irish businesses recognising the importance of overseas trade for their businesses, it is essential that we help them realise their export ambitions

“Accountancy constantly evolves as ultimately it responds to the needs of businesses and the people within them. The accountancy profession is on the cusp of evolutionary change and Sage partners with thousands of accountants to manage that disruption, for wherever they are on the digital journey; be it cloud native, cloud connected or desktop,” says Barry Murphy, managing director, Sage Ireland.

“Sage help accountants support the needs of both their clients and their own practice by providing a wide range of integrated technology solutions.The Accountancy Awards are great for us, not only to recognise the best in class practices, but also to stay close to what is driving their success.”

Sage has been operating in Ireland for over 20 years, and in that time, it has established a global centre of excellence for digital marketing here, as well as a software development team and a customer success function.

For Sabby Gill, executive vice-president and managing director for Sage UK & Ireland, it’s been an important investment: “I’m proud of the role that Sage has played in Ireland over the past 20 years. With 60 per cent of Irish businesses recognising the importance of overseas trade for their businesses, it is essential that we help them realise their export ambitions. Sage is committed to helping achieve this vision for Ireland’s thriving landscape, and we look forward to another 20 years working alongside the country’s ambitious businesses.”

The judging co-ordinator for this year’s Irish Accountancy Awards is Anne Keogh, who is head of finance, and operations for Pharmapod. She and the rest of the judging panel, comprising of experts from both here and abroad, will be carefully considering each of the award’s categories between now and April 16th.