The shortlist has been revealed for the Agribusiness Awards 2017, championing agricultural companies from across Ireland 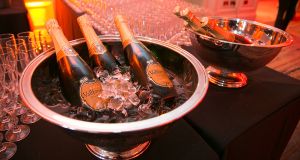 The Agribusiness Awards 2017 will take place on November 9th in the Ballsbridge Hotel, Dublin

Since they launched in 2015, the Agribusiness Awards have celebrated and recognised the most innovative organisations and individuals in the agricultural indistry. The event identifies those companies that contribute to Ireland's status as a global leader in the agribusiness sector.

The black-tie gala will take place on November 9th in the Ballsbridge Hotel, Dublin. Moderated by judging co-ordinator, Karina Pierce, the independent judging panel consists of experts from throughout the agribusiness sector.

“It’s great to once again be involved in the Agribusiness Awards. This year sees an increased number of entrants in many categories, highlighting the range and quality of the agribusinesses we have in Ireland. These companies are making a significant contribution to the sustainability, innovation and competitiveness of the Irish economy and the Agribusiness Awards is a means of acknowledging their contribution,” said  Pierce, BAgrSc, PhD, lecturer in dairy production at the School of Agriculture and Food Science in UCD.

Jill Robinson is chief executive at Emydex, a company that has been involved with the Agribusiness Awards since they first began. She reflects on the importance of such an event for the industry. “We are delighted to be Platinum Sponsor for what is now the key industry event in the Agribusiness calendar. It is the only event running in Ireland that brings all food producers together under one roof, including many Emydex customers. We see it as important to recognise the hard work and commitment by all involved in the Agribusiness sector. It is a great opportunity to network with a wide audience of key individuals within the Agribusiness Industry’” she said.

Ahead of the awards Deirdre O’Shea, executive director of Agri Aware, spoke about how the organisation is looking forward to the big night, “We think it’s fantastic we have been shortlisted for two awards at this year's event. Our team are always excited to share the news of an award with our industry patrons and being shortlisted for these awards recognises Agri Aware’s efforts over the past 20 years in communicating the importance of the Irish agri-food industry to students across Ireland,”  she explained.

The complete shortlist is as follows.

Agribusiness of the Year
Sponsored by Emydex
Winner will be revealed on the night.

Agribusiness Leader 2017
Sponsored by GS1
Winner will be revealed on the night.