Ahead of the Dublin launch of the Bord na Móna Hearth Sessions next week, we meet the musicians involved 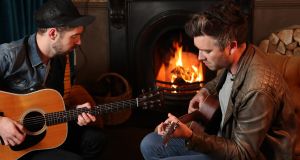 All Tvvins: “Some really cool bands have played this already and it’s just something that’s a bit different.”

A crackling fire in the local pub has always been synonymous with storytelling, music and having the craic. It’s the classic Irish escape. This winter, music lovers will get an additional opportunity to enjoy it alongside some of the best of Irish talent in four pubs around the country. Each will host a series of intimate performances of great Irish music beside a roaring fire.

Bord na Móna has invited publicans, via social media, to compete for the chance to hold a Hearth Session in their own pub and three will host the bands in early December.

Vote for your favourite pub at facebook.com/bordnamonafuels.

Gavin James headlined last year’s sessions and this year All Tvvins will do the honours. They will top the bill at the first session to be held in the Parlour at Whelan’s on November 22nd. Lar Kaye and Conor Adams from All Tvvins explain why they really wanted to get on board with this gig.

“Some really cool bands have played this already and it’s just something that’s a bit different. We’re used to playing rowdy enough gigs that are really energetic and we don’t do that much acoustic stuff. Surprisingly, our music works well when we strip it down. They say the mark of a good song is being able to play it on an acoustic guitar. We have done radio sessions like this where you can’t bring in your whole backline and it’s worked well. It’s nice to put a twist on it,” Kaye says.

Describing their music as honest, upbeat, joyous and uplifting lyrically, Adams says their songs are a celebration of life.

The duo recently played Ireland Week in Los Angeles with the likes of Lisa Hannigan, Elm and the Strypes.

“We stayed on for an extra few days and wrote some songs. We were in Laurel Canyon, just outside LA, where Brian Wilson and Jim Morrison used to hang out. It was a really inspiring place for us and it’s not very often you get to write music beside a swimming pool in 30-degree heat.”

With both European and Irish tours set for the new year, they say playing a small, intimate gig before that will be a nice change for them.

In October, Ye Vagabonds released their self-titled album through their own label, Inglenook Records. An inglenook or chimney corner is a small recess that adjoins a fireplace.

Brothers Diarmuid and Brian McGloinn say the idea of a fireside “is a good notion”.

“We’re cosy people, we enjoy corners of pubs and do quite a few pub sessions. Our music is fireside music so we thought this was a perfect fit for us.”

“It’s music that’s at home in a parlour or a kitchen more than it is on a big stadium stage. We’re more of a small dirty stage as opposed to a big shiny stage,” Diarmuid jokes.

“We’ve been lucky enough to play a few big venues, like the Vienna Concert Hall and the National Concert Hall in Dublin but even when we play big places like that we try to make it as intimate as possible.”

Having just released their debut album, the brothers flew to Australia to play for Michael D Higgins during his official visit there.

Now back on home soil, they plan to spend a few weeks “hanging out” before going back into the studio to work on a second album.

Stephanie Rainey is the only woman on the bill but with songs like Please Don’t Go in her arsenal, which recently catapulted her to worldwide media attention, she is set to be a highlight. She likes that the gigs will bring together a number of acts from different genres and loves audience interaction, which an intimate setting will allow.

“When I play live, I love chatting and explaining what my songs are about. It’s really good for context and it engages people, especially if they don’t really know what the song is about,” she says.

With new single, Sorry, out on November 24th, Rainey describes it as very different to her other singles and as a “very chilled-out track”.

The London Gospel Choir backs her on it, which was an “incredibly exciting” experience for the Corkonian.

Little Hours’ new EP Too Much Patience has gone to number one in the iTunes charts, something lead singer John Doherty is “really chuffed about”.

Co-founder of the band Ryan McCloskey announced he was leaving Little Hours in September but Doherty says “it’s all good”, with a new guitarist now in place.

He says their acoustic, piano-driven sounds will be well suited to the Hearth Sessions and will be “a nice couple of gigs in the run-up to Christmas” for the band.

“We’re going back to the studio to get some new songs recorded, ones we’ve been sitting on for a while now. We’re also doing a show in Donegal, which will be a nice homecoming around Christmas. The support up there is incredible.”

Bord Na Móna has invited the nation to vote for their favourite pubs to host a Hearth Session of their own, featuring intimate acoustic sets from Stephanie Rainey, Little Hours and Ye Vagabonds. Vote for your favourite pub at facebook.com/bordnamonafuels

Speaking on the idea behind the Hearth Sessions, Karen Smyth, marketing manager at Bord na Móna says; “Each year, as the days get colder, the conversation turns to where to find the best pubs with a cosy fire – the perfect place to spend winter nights socialising, sharing music and craic.

“We began our search to find those Irish pubs with legendary fires that could host some of Ireland’s best talent at an intimate Hearth Sessions gig.

“The launch of the 2016 Hearth Sessions featured Gavin James’ heart-melting performance against the backdrop of a crackling fire at the Parlour Bar at Whelan’s and acoustic fireside sessions at Johnson’s Pub in Newbridge and Kelly’s Bar in Birr Co Offaly, with Roisin O and Brave Giant.

“This year the search continues for the best pubs with cosy fires and we’ve got some of Ireland’s finest talent in All Tvvins, Ye Vegabonds, Little Hours and Stephanie Rainey to add to the line-up so the public are in for a real treat.”

Bord na Móna is Ireland’s best loved and leading provider of home heating fuel and can offer a full range of quality products including peat briquettes, coal, wood and a range of convenience products.

Eco Rangers: Into the Wild

Are you a sustainability hero?

The woodland sanctuary at the heart of Body&Soul