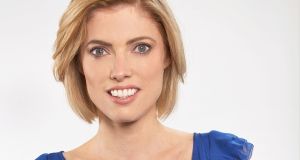 Ciara Hunt: “If you're the person with the idea, then find someone who can execute it for you“

Leaving a distinguished 20-year career in fashion journalism that included high profile positions in Net-a-Porter and InStyle magazine in order to start a baby food business may seem like a plucky, if not outlandish move.

But when her husband was relocated to Munich three years ago, Dubliner Ciara Hunt knew that she could no longer rely on journalism for a living.

A brief encounter at a yoga class led her to Jaclyn Schnau, her now business partner in Pumpkin Organics, an online baby snack business that was launched in May.

It’s ironic that Hunt should start a baby food business given her scepticism about such products. “Initially I had absolutely no interest because, as a mother of three, I had never found anything pre-packaged that I would give to my own kids.”

But Hunt was drawn to the fact that she might be able to create a product that she would deem fit to give to her own children. She also knew she could transfer her journalistic skills into building a website, telling the story of the product.

The concept for Pumpkin Organics was formulated and the product, with nine varieties of snacks, can now be bought online.

This is a far cry from Hunt’s earlier life. In the first year of her degree at Trinity College Dublin, she worked on Mary Robinson’s presidential campaign. She later moved to London and worked at Condé Nast, on Tatler magazine. “At the ripe old age of 25, they made me managing editor of World of Interiors.”

She was then tasked with relaunching 1960s feminist magazine Nova, which she calls a “baptism by fire”.

“This was a huge learning curve for me. I learned how not to launch a magazine because it failed completely.”

Hunt’s sanguine personality allowed her dust herself off quickly and she moved on. Jobs with Hello! magazine in Canada, InStyle magazine in the UK and as a royal reporter in Boston followed. The move to Munich happened when she was heavily pregnant with her third child.

Hunt has nurtured two babies in the last three years: her son Louis and her very young business. She says the fact she can now integrate work into her home life has been positive both for her and her family.

As chief content officer, Hunt is responsible for building the brand and anything that goes on the website or on social media gets her seal of approval. “We have a very strong message to get across and we cannot compromise on that,” she says.

Pumpkin Organics has partnered with German baby milk producer DMK and they have created recipes that are vegetable heavy, packed with lots of grains, legumes and lentils for a healthier snack. Everything is 100 per cent organic and natural. “It’s for babies but we’ve been eating them for our 4pm snack every day,” she laughs.

“Our daily mission is to train tiny taste buds early in life to love veggies. We hope that babies and children eat healthier snacks and begin to see veggies not only as wholesome but also delicious.”

“For the business we’re young, we’re hungry and we want to grow fast in Germany and Europe. Our immediate focus is growth – we sell online and can ship all over Europe and will also be available in select stores around Europe. But there’s also a huge learning curve when it comes to healthy snacking and we hope to educate parents and children alike. We will use our website and social media to tell this story.”

Hunt cites several strong female figures as mentors throughout her career but she credits her mother with instilling in her the desire to try new things.

“She reinvented her career several times. She started off an art festival in Kinsale, now she is an art consultant at Sotheby’s. She’s an amazing connector of people and ideas. I really value that.”

Hunt keeps in touch with former bosses and takes time to dine with her editor at InStyle, Louise Chunn, whenever she’s in London.

The more successful women there are out there, the better

In starting a business, Hunt says it is important to seek out people who can help make things happen.

“I know people who have come up with amazing ideas but they never worked. That’s because they didn’t know how to execute it. If you’re the person with the idea, then find someone who can execute it for you. Be willing to share that journey with someone else,” she says.

When it comes to procuring financial backing, she says, “Investors have very different brains to entrepreneurs. They are money driven but they love the journey of an exciting idea, so you need to believe in what you’re building and be able to take them on that journey.”

Hunt says that for her, it’s always been important to celebrate other women throughout her career, “be it stay-at-home mums or high achieving business women”.

“We have a tendency to criticise and judge others and we should celebrate their achievements instead and be happy they are successful in their sector. The more successful women there are out there, the better.”