Be One. Inspire One: Jennifer English heads the marketing team for Baileys, one of Ireland’s best known drinks brands 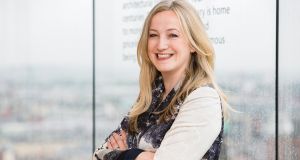 Jennifer English of Diageo. “A huge part of going to university is finding out what kind of person you are.” Photograph: Rob O’Connor

Marketing executive Jennifer English reckons an ability to embrace change is central to success. It’s a philosophy she brings to the workplace. Among her most recent successes for drinks giant Diageo is helping restore iconic global drinks brand Baileys to growth by changing our perception of it.

Gone is any sense of it being an old fashioned liqueur digestif. Instead, helped by the advent of new flavoured versions and recipes that turn it almost into a dessert, it takes centre stage in the fast growing “sweet treat” category. Sales have grown sweetly too, up 6 per cent globally.

That English, whose title is global content director for Baileys, has ended up at the top of her game in the drinks industry in itself marks a change in direction for a woman who started out as a botanist.

She studied the subject in UCD, guided by a love of science. “At school I had a very clear sense, which I still have in fact, that science is the best route to changing the world. I was going to play a part in that.”

In fact, as her degree progressed she became increasingly involved in what might be termed the social sciences instead, working for the UCD Student Union as finance officer, communications officer and all-round general agitator on behalf of her fellow students.

“When youngsters tell me today they are worried because they don’t know what they want to study I tell them it really doesn’t matter what degree you get.

“Choose something you’re interested in because that will make it easier to get to lectures on a wet Wednesday morning. But don’t stress about what degree you choose, because there’s nothing you can’t pick up at a later stage if you need to.

“In any case, a huge part of going to university is finding out what kind of person you are. By the time I had finished my degree I realised I was more interested in a commercial role, and that, while I enjoyed studying science, I missed my creative side.”

A masters degree in advertising helped fill both needs, and she went on to work in the industry for a number of years before joining Diageo 13 years ago.

Being open to change has always been important to her, particularly as we are living through a period she reckons is best described as “the great accelerator”.

“If I have gained any insight it’s the truth in Charles Darwin’s maxim that it’s not the strongest or the fittest that survive, but the ones most adaptable to change. To succeed you need to be willing to change. Embrace it.”

A supportive employer can help.

“I feel very fortunate to have landed in a company that is so supportive not just of women but of diversity in general. Our board has 36 per cent women, our global executive – the people actually running the company – is made up of 40 per cent women. On the Baileys team more than half are women.”

She has also benefited from its strong mentoring culture.

“Diageo is very structured about mentoring and feedback. You’re encouraged to take time every day to offer feedback about how to improve; it’s built into the culture. When you have benefited from that mentoring, as I have throughout my career, you feel the need to pay it forward.”

Fostering talented people in her team is something she feels passionately about.

“In the past too many people were channelled down just one particular funnel in their career. In Diageo there’s a very strong feeling that ‘we want you to be the best you’, and I feel supported in that.

“One of the other ways in which the world of work has changed so much in recent years is that both women and men are getting to make more choices about their life.”

That both men and women are deserving of such choices, free from gender bias, is something she absorbed in her earliest years.

I do notice that I have been asked an unreasonable number of times if I work full time and, if so, who looks after my kids, while my husband has never been asked

“My father was an engineer who would build bridges and dolls houses with equal pleasure. He was also happy doing the grocery shopping and the cooking. That was very unusual in 1970s Ireland.”

The fact that she is a fifth generation working woman, and is married to a man whose mother also worked full time, means she herself has never felt anything but supported in her career ambitions at home. Outside of home and work it can be different.

“I do notice that I have been asked an unreasonable number of times if I work full time and, if so, who looks after my kids, while my husband has never been asked. I know people are only trying to be supportive, but they are actually questioning my work arrangements.”

If so, they picked the wrong woman. Pride of place in her parents’ home is a picture of English out campaigning on Grafton Street for Mary Robinson in 1990. The former president is still a hero.

“Her election was hugely important to me. It brought about transformational change, totally reimagining the presidency and the country, opening doors and taking away barriers.”

Today women make up a significant share of her market at Baileys, and it is still one to which she is particularly attuned. Just like herself, what women don’t want is to be told how to be.

Be One. Inspire One, sponsored by Ulster Bank, is a series appearing monthly in print and online that tells the stories of successful Irish women and what it is that inspires them.