Be One. Inspire One: Ciara Donlon, director of Theya Healthcare, which makes bras for women recovering from breast cancer 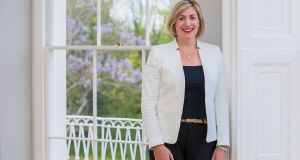 Ciara Donlon of Theya Healthcare: “I’ve had a woman tell me our bras helped her go outside again. Making things easier for these women drives me.” Photograph: Rob O’Connor

Businesswoman Ciara Donlon was a millennial even before the term was coined, in so far as she liked to change jobs – a lot. It was confidence that enabled her give up a high-flying career to become a pilot. It was confidence too that enabled her transform a modest lingerie business into an award-winning export manufacturer dedicated to making life easier for women recovering from breast cancer.

Now 40, with her company Theya Healthcare flourishing, if she has advice for younger women starting out, it is to be bold: “I’ve never let fear stop me from doing anything. If you believe in something, go for it.”

If any one person can be credited as the wind beneath her wings, it’s her beloved dad, John. “He is my inspiration. He was, and still holds the record, I believe, as the country’s youngest-ever secretary general at what was the Department of Industry and Commerce. He was a hugely intelligent man and he always made me feel there was absolutely nothing in life that I couldn’t do.”

Sadly, he passed away last year, a source of profound grief for Donlon, an only child. “I just wish he was still around.”

That he got to see her success is some consolation, especially as, given her peripatetic career, he could never have guessed, as she was starting out, where she would end up.

“Every two years I’d get itchy feet, so I worked in loads of places, from dotcoms, to big banks and major corporates. In the middle of the noughties I got really bored and took a job running a flying school in exchange for flying lessons.”

She followed that up with a stint in Vodafone, where she ended up as head of online. When, in 2010, the company offered redundancy packages, she jumped at the chance. “I had always wanted to start my own business and now I had a pot of money to do it with,” she says.

But what to do? A chat with a local businesswoman provided the nudge.

“I was visiting a shoe shop near my home in Ranelagh and was interested to hear that the owner had previously been a solicitor. We got to chatting and I told her my story and how I was keen to open a business. She said one thing Ranelagh could do with was a lingerie shop.”

Donlon set out to see if this were true. She and her best friend – now head of marketing – Eileen Rainsberry surveyed women in the street to get their view. The result was a resounding thumbs-up.

She drew up a business plan and went to the bank for a loan.

“I needed €70,000 to open the shop and I only had half of that, so I had to make my case,” says Donlon, who, despite not even being a customer of the bank, got the thumbs-up there too. “The woman making the decision liked the idea,” she said.

Cupcakes opened two days before Christmas in 2010, and very nearly closed again. “There was snow everywhere and it was so cold that the paint wouldn’t even dry in the shop. I stood looking at the empty streets thinking we were never going to sell anything.”

Everything that was on the market was designed not only by men but, worse still, by engineers

However, true to their word, the women of Ranelagh came good, and from its first year the business was in profit.

Early on Donlon was struck with a particular difficulty some customers were having. “From the beginning we got very many women coming in who had had mastectomies as a result of breast cancer and were having post-operative radiation treatment. They were looking everywhere for a bra that was comfortable for them.”

Donlon too had trouble sourcing them. “They were either designed with the prosthetic in mind and were therefore uncomfortable, or they were sexy and lacy, which wasn’t what women wanted either. There was nothing that was pretty, comfortable and designed with women in mind. In fact, everything that was on the market was designed not only by men but, worse still, by engineers. That was my ‘aha!’ moment.” With the help of funding from Enterprise Ireland’s Competitive Start Fund for Female Entrepreneurs, she undertook in-depth market research, including focus groups and extensive one-to-one interviews with women recovering from cancer treatment.

The result was the closure of Cupcakes and the launch of Theya Healthcare, with women at its heart. Each garment, for example, features a rose somewhere in its design, in honour of her grandmother Rose, who had a double mastectomy in the 1970s and went on to thrive.

Naming the business after a Hindu goddess of power was deliberate too. “What struck me about all the women I had interviewed was their strength,” says Donlon. “It was truly humbling. They were going through this terrible time and yet all their concern was for others, for their family. I think one of the reasons the bras available previously were so poor was because women are so focused on others and not on themselves that they didn’t complain about itchy, scratchy synthetic materials.”

Donlon developed her own proprietary blend of super-soft bamboo, a natural fibre with antibacterial properties, and used no seams or tags. So effective are her post-operative bras, which now sell around the world, that they have been classified as a medical device. Theya is an approved supplier to the UK’s NHS.

For Donlon, what is particularly satisfying is not that it is a successful business, but that it is one whose success has come about by helping women at a particularly difficult juncture in their lives.

“I’ve had a woman tell me our bras helped her go outside again. One woman told me she could look in the mirror again because of them. Making things easier for these women drives me. To me business growth is just a way of ensuring I can help more women. The fact that I’ve created a business that makes money is great, but that’s just a by-product.”