Ellen Caren and husband David developed Run Angel, a safety device for runners, at their kitchen table – with family looking on 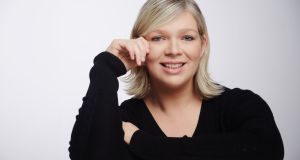 One of the clearest messages Ellen Caren of Run Angel is sending her children – two daughters and a son aged 11, nine and eight – is that they too can be entrepreneurs. There is no secret formula and no specific personality type. Instead there is a good idea, steps that can be taken and skills that can be acquired.

Her children know all this because they’ve been involved in the development of her business, Run Angel, since its conception three years ago through to its commercial launch in March of this year. And now they see it selling around the globe.

Run Angel, a personal safety device aimed at runners, was born at the Carens’ kitchen table. Husband David was out for a run one day when, out of the blue, he was knocked over by a man for no reason. It got the couple to thinking not just about the loneliness of the long distance runner, but the safety.

When activated by the wearer, Run Angel emits a high-volume alarm and sends alerts by SMS and email to nominated guardians, with GPS co-ordinates and a map. It’s not marketed to women specifically but to all runners, says Caren. Or indeed anyone, such as lone workers or backpackers, who might like the peace of mind of knowing they can alert someone in the event of an incident or accident.

“What we found from our focus groups was just how many female runners have concerns about being out running on their own, not just in isolated places but even in university campuses. People in the States were telling us how they change their running route to stop feeling uneasy about going the same way all the time,” says Caren.

A marketing graduate who ran a communications agency with her husband prior to setting up Run Angel, it is important to her not to promote the device by preying on – or even encouraging – women’s fears but by focusing on female empowerment. And that is just what its users have been telling her: “The feedback we’ve been getting is amazing. Women tell us they do find it empowering.”

Not alone was the entire business hatched and cultivated at home but its progress played out in front of her children. “My family is my inspiration. It was really good for them to see that David and I, neither of whom has a technology background, could come up with a technology idea and then work with teams of engineers to get it built, launched and selling commercially,” she says.

Getting the device made was a challenge. “Everywhere we went people told us it couldn’t be done, that, acoustically, we couldn’t get an alarm of the volume we wanted in such a small device. It wasn’t possible. Yet we did it,” she says. “The key is never to be afraid to ask questions. We sat in rooms filled with engineers and never pretended to know more than we did.”

Another lesson learned is that you don’t have to engage in a “hard sell” if your product or service is good. “I’m an introvert,” says Caren. “It can be hard to be out there pitching for business in a world full of extroverts. But I learned that you can acquire the skills you need to get out there and do it,” she says.

Unsurprisingly, when it comes to reclaiming her own head space, her timeout of choice involves pulling on her runners – and her Run Angel – and putting in the hard miles of a different sort. “It’s the freedom it gives, just to get away from things for half an hour,” she explains.

Run Angel is designed and manufactured in Ireland. “This was important to us from a quality perspective, because we wanted a product we could stand over. Every single one of our devices is tested in a specially built chamber,” she says.

As well as online sales Run Angel is in advanced negotiations with a distributor that would see it roll out across Europe in bricks and mortar stores too. Already a favoured gift item, Christmas is gearing up to be particularly hectic.

If so, it will provide a welcome pay day. Both Ellen and David gave up their day job to concentrate on Run Angel full time, at significant financial cost. “I think you have to commit to your business 100 per cent,” she says. Though they now have significant private investment on board, bootstrapping in the early stages is a good discipline. “We keep a very close eye on the bottom line.”

And, because her kids are watching, “failure is not an option”, she says. “I’d like them to see that everything is possible. I think that’s a good lesson for them.”

Be One. Inspire One is a series appearing monthly in print and online that tells the stories of successful Irish women and what it is that inspires them.

The series is being supported by Ulster Bank, which understands the need for flexible solutions for busy professionals. “Ulster Bank Private Banking allows you the flexibility you need by saving you time and helping you to manage your personal banking from wherever you are, whenever you want, leaving you free to focus on the things that really matter in your life,” says Sandra O’Rourke, relationship manager with Ulster Bank Private Banking.