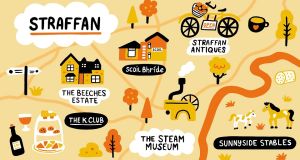 What do Eric Clapton and Pippa O'Connor have in common? They each chose to make their homes in Straffan, a village on the river Liffey in north Co Kildare, 25km upstream of Dublin city. With a population of around 900, this pretty place is not somewhere you'd go to hide but, says Emma Keogh, who moved there in 2016, that's kind of the point.

“For years, living in Dublin, we were anonymous – in Straffan, you get to know people really quickly. It's a lovely, friendly place,” she says. When Keogh, who is from nearby Kill, and her husband, who is from Wexford, started looking for houses, they were open-minded when it came to location.

“We were working in Dublin and when we started looking to buy, we looked everywhere – Naas, Ratoath, Maynooth ­– and then we decided to look at Straffan.” Keogh now owns Simplicité Wellbeing & Beauty Clinic, a beauty salon in the centre of the village. When the couple first moved to Straffan she was working at PayPal, and getting out of the rat race – even if she ended up in an equally taxing position, owning and running a small business in 2020 – was just a happy side effect of the move.

Close proximity to Dublin city centre, with a direct bus service (Bus Eireann's 120) from Wellington Quay (on a light traffic day, it takes just 35 minutes according to Google), Straffan is a small village with big charm. It's as bougie as it gets, with lovely shops and restaurants, manicured surrounds, a plethora of picturesque walks to take and an astonishing number of afternoon tea options. It’s even got a nearby triple Michelin-starred restaurant to brag about.

Straffan’s long-established village vibe as well as its more recent elevation thanks to the arrival of the K Club in the 1990s means there is a good mix of housing available. In addition to standalone builds with large gardens set back from manicured verges, there are new housing developments and period properties too. Families will like the Beeches estate, while those looking for a new build scheme could opt for the Hammerstone development. If you’ve a bit more to spend, the gated Ladycastle development, on the grounds of the K Club, offers a good mix of large detached homes as well as apartments.

Google notes that by car, the N7 is about 15 minutes from the village, while the N4 is a 10-minute drive. The nearest train station, Hazelhatch and Celbridge, is 11 minutes away by car and offers service to Dublin Heuston, Grand Canal Dock and, in the opposite direction, Galway, Cork, Waterford, Portlaoise and Limerick. The village is well serviced by bus, too; Bus Eireann offers its 120 bus service from Straffan village to Wellington Quay and, in the opposite direction, it will take you to Tullamore via Clane and Edenderry.

North Kildare and its surrounding area is well supplied for educational options, something families will appreciate. In terms of primary schools, Straffan’s National school is the co-educational Scoil Bhríde. Nearby Celbridge offers North Kildare Educate Together and in Maynooth there is the Educate Together National School. Secondary options include St Wolstan's Community School in Celbridge, or fee-paying options in King's Hospital School, Lucan and Newbridge College, Newbridge. And, for those progressing to further education, Maynooth University is just a few kilometres away.

Straffan surely boasts one of the highest rates of scones per capita, with afternoon tea options coming out of its ears. Take your pick from offerings at Barberstown Castle, where, in spring and summer, the patio area is a treat; the K Club, of course, where cream is clotted and post-prandial walks through the ground are worth the trip alone.

Straffan Antiques offers a wide variety of cakes, bakes and lunchtime fare, while Quirc in the heart of the village is an interior décor paradise that also happens to be one of the village's most popular spots for a natter and a nibble.

Of course, any mention of Straffan and its environs must include mention of Aimsir, the three Michelin-starred restaurant on the grounds of the Lyons Estate whose tasting menu opens for bookings three months ahead, and sells out almost instantly. Apply for a table on any date, at any time, between now and 2021 and you'll have to add your name to their extensive waiting list.

For a pint of the black stuff, there's nowhere better than The Straffan Inn in the heart of the village

Outdoor pursuits are more important now than ever and this leafy enclave boasts its fair share. From golf – at the K Club, Clane's Millicent Golf Club or nearby at Castlewarden Golf Club – to horse riding at Sunnyside Stables, there is a plethora of activities on offer for the outdoors enthusiast. A trip to nearby Castletown House, in Celbridge is worth for the art and architecture - this Palladian country house, built in 1770, is one of the finest in the country - and also for dog walking in its extensive parklands.

The Steam Museum & Lodge Park Walled Garden will appeal to both railway enthusiasts and amateur horticulturalists – the Victorian Gothic building, which once stood in Inchicore, is now home to an array of models as well as stationary engines from the 19th century and, of course, the Steaming Kettle Teahouse (which opens on Bank Holidays only).

My goodness, my Guinness

One of the area's most famous residents was, of course, Arthur Guinness, whose gravestone can be found in the nearby Oughterard Cemetery. Local legend has it that the name Oughterard was exported from Kildare to Galway when Cromwell began to push residents westward.

The cemetery itself is the site of one of Ireland's ancient round towers, and the crumbling stone church has stone steps leading up to a rooftop from which it is said that, on a clear day, you can see nine counties.

For a pint of the black stuff, there's nowhere better than The Straffan Inn in the heart of the village where, according to Keogh, you'll get to know the locals in no time. A second option is Friel's of Straffan, while McEvoys thatched-roof pub by the canal at Hazelhatch is a popular spot for cyclists to pause and gather their strength along the canal cycling route.

Even aside from the aforementioned Guinness connection, Straffan has seen its fair share of stars bedding down in its environs. Right now, you might spot fashion mogul and social media star Pippa O'Connor and her husband, TV presenter Brian Ormond – they own a home here.

At the height of the Boyzone buzz, Ronan Keating and his ex-wife Yvonne Connolly built a home in nearby Ardclough, a stone's throw from Straffan village, while the town's most famous ex-resident is surely Eric Clapton, who owned – and lived in – nearby Barberstown Castle from 1979 to 1987.

“I’ve helped a lot of customers buy in Straffan over the past year,” says Lisa Glavin, Bank of Ireland’s mortgage manager for Co Kildare. “Straffan is proving more and more popular with home buyers as it’s a beautiful historical village in close proximity to Dublin. It is a great community and we are a community bank, helping customers through the whole mortgage journey from start to finish.”

If you’re interested in buying in Straffan, contact Lisa Glavin at Lisa.Glavin@boi.com or on 087 3626205, or visit bankofireland.com/mortgages

Firhouse Dublin 24 provides mature housing and access to the mountains